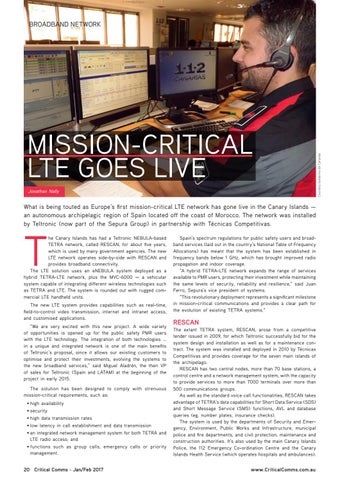 What is being touted as Europe’s first mission-critical LTE network has gone live in the Canary Islands — an autonomous archipelagic region of Spain located off the coast of Morocco. The network was installed by Teltronic (now part of the Sepura Group) in partnership with Técnicas Competitivas.

he Canary Islands has had a Teltronic NEBULA-based TETRA network, called RESCAN, for about five years, which is used by many government agencies. The new LTE network operates side-by-side with RESCAN and provides broadband connectivity. The LTE solution uses an eNEBULA system deployed as a hybrid TETRA-LTE network, plus the MVC-6000 — a vehicular system capable of integrating different wireless technologies such as TETRA and LTE. The system is rounded out with rugged commercial LTE handheld units. The new LTE system provides capabilities such as real-time, field-to-control video transmission, internet and intranet access, and customised applications. “We are very excited with this new project. A wide variety of opportunities is opened up for the public safety PMR users with the LTE technology. The integration of both technologies … in a unique and integrated network is one of the main benefits of Teltronic’s proposal, since it allows our existing customers to optimise and protect their investments, evolving the systems to the new broadband services,” said Miguel Aladrén, the then VP of sales for Teltronic (Spain and LATAM) at the beginning of the project in early 2015. The solution has been designed to comply with strenuous mission-critical requirements, such as: • high availability • security • high data transmission rates • low latency in call establishment and data transmission • an integrated network management system for both TETRA and LTE radio access; and • functions such as group calls, emergency calls or priority management.

Spain’s spectrum regulations for public safety users and broadband services (laid out in the country’s National Table of Frequency Allocations) has meant that the system has been established in frequency bands below 1 GHz, which has brought improved radio propagation and indoor coverage. “A hybrid TETRA-LTE network expands the range of services available to PMR users, protecting their investment while maintaining the same levels of security, reliability and resilience,” said Juan Ferro, Sepura’s vice president of systems. “This revolutionary deployment represents a significant milestone in mission-critical communications and provides a clear path for the evolution of existing TETRA systems.”

RESCAN The extant TETRA system, RESCAN, arose from a competitive tender issued in 2009, for which Teltronic successfully bid for the system design and installation as well as for a maintenance contract. The system was installed and deployed in 2010 by Técnicas Competitivas and provides coverage for the seven main islands of the archipelago. RESCAN has two central nodes, more than 70 base stations, a control centre and a network management system, with the capacity to provide services to more than 7000 terminals over more than 500 communications groups. As well as the standard voice call functionalities, RESCAN takes advantage of TETRA’s data capabilities for Short Data Service (SDS) and Short Message Service (SMS) functions, AVL and database queries (eg, number plates, insurance checks). The system is used by the departments of Security and Emergency, Environment, Public Works and Infrastructure, municipal police and fire departments, and civil protection, maintenance and construction authorities. It’s also used by the main Canary Islands Police, the 112 Emergency Co-ordination Centre and the Canary Islands Health Service (which operates hospitals and ambulances).