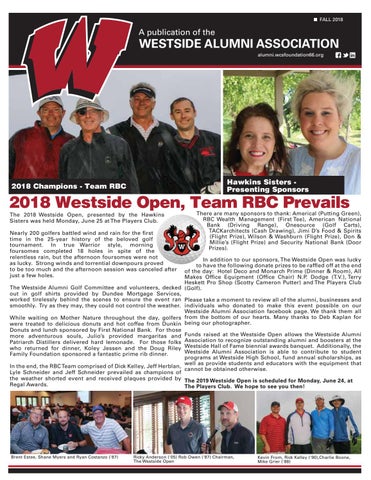 A publication of the

Nearly 200 golfers battled wind and rain for the first time in the 25-year history of the beloved golf tournament. In true Warrior style, morning foursomes completed 18 holes in spite of the relentless rain, but the afternoon foursomes were not as lucky. Strong winds and torrential downpours proved to be too much and the afternoon session was canceled after just a few holes.

In addition to our sponsors, The Westside Open was lucky to have the following donate prizes to be raffled off at the end of the day: Hotel Deco and Monarch Prime (Dinner &amp; Room), All Makes Office Equipment (Office Chair) N.P. Dodge (T.V.), Terry Heskett Pro Shop (Scotty Cameron Putter) and The Players Club The Westside Alumni Golf Committee and volunteers, decked (Golf). out in golf shirts provided by Dundee Mortgage Services, worked tirelessly behind the scenes to ensure the event ran Please take a moment to review all of the alumni, businesses and smoothly. Try as they may, they could not control the weather. individuals who donated to make this event possible on our Westside Alumni Association facebook page. We thank them all While waiting on Mother Nature throughout the day, golfers from the bottom of our hearts. Many thanks to Deb Kaplan for were treated to delicious donuts and hot coffee from Dunkin being our photographer. Donuts and lunch sponsored by First National Bank. For those more adventurous souls, Julio’s provided margaritas and Funds raised at the Westside Open allows the Westside Alumni Patriarch Distillers delivered hard lemonade. For those folks Association to recognize outstanding alumni and boosters at the who returned for dinner, Koley Jessen and the Doug Riley Westside Hall of Fame biennial awards banquet. Additionally, the Westside Alumni Association is able to contribute to student Family Foundation sponsored a fantastic prime rib dinner. programs at Westside High School, fund annual scholarships, as well as provide students and educators with the equipment that In the end, the RBC Team comprised of Dick Kelley, Jeff Herblan, cannot be obtained otherwise. Lyle Schneider and Jeff Schneider prevailed as champions of the weather shorted event and received plaques provided by The 2019 Westside Open is scheduled for Monday, June 24, at Regal Awards. The Players Club. We hope to see you then!

The inaugural Party on Pacific on August 17th at the John L. Hoich Westside Alumni House was a success with 228 alumni and friends in attendance raising over $50,000! The end of summer party featured live music by Envy, tasty food trucks and craft beers. All money raised will benefit students of Westside Community Schools. If interested in sponsoring or attending the 2019 Party on Pacific, please email westside.foundation@ westside66.net.

President’s Corner Congratulations to Meagan Van Gelder, our former President, on her election last May to the Westside Community Schools Board of Education. Meagan has responsibly stepped down from the position and as your former Vice President, I will serve as President for the remainder of this term. Thank you, Meagan, for your unwavering commitment to this community! I am very excited to represent this tremendous alumni network. Westside alumni are connected by our experiences, stories, families, neighborhoods, and traditions. Our mission is to maintain communications and connectivity among alumni and friends through our newsletters, website, and social media. We coordinate alumni events and gatherings. We recognize outstanding alumni. We are also dedicated to supporting the educational objectives of Westside High School. To achieve all of this, we must raise funding. The well-attended Westside Open annual golf outing is our primary source of funding. With our funding, we are able to execute a few, specific actions: WHS Wish List 33%

A large portion of our funding goes to scholarships for graduating seniors as they embark on their respective journeys. We are invested in their success as it is a positive reflection on our district. Our ongoing support of Westside High School includes the fulfillment of “wish list” items. Last year, we were able to grant a table saw, power drill, and air compressor for the visual arts department, and an iPad Pro for the math department. These items help our teachers creatively prepare students for their future, without adding pressure on the school budget. From all of us on the Westside Alumni Association board, we are proud to serve you and we hope to see you soon at the 25th annual Alumni Basketball Tournament. Sincerely,

Principal’s Corner Hello, Warrior Alumni! We see daily the pride you have for your high school and district, from the cheers of our graduates at sporting events, your time and commitment to fundraisers, and the partnerships you extend to Westside High School. These days, we are also seeing a wider net of unity in the pride so many of our alumni have as graduates of Nebraska’s wonderful public schools. This school year, you will see powerful evidence of that camaraderie through a simple phrase: #BeKind. Ralston Superintendent Mark Adler and his wife Joni introduced that hashtag to the Omaha-metro area in the wake of their son’s tragic death. Now, more than 30 area school districts, including Westside, have joined in their mission to promote positivity and teamwork.

Many of our student-led activities at WHS will promote the #BeKind message through events at games, in the classroom, and more. Most importantly, our students and staff will continue to actively spread kindness through their actions; by recognizing when a friend or colleague does something well, by leaving anonymous notes on the lockers of students who need to hear a compliment, and by mentoring younger students, who so often, look up to our Warriors and learn by their example. Warrior alumni, I ask you to join us in our commitment to kindness. Here at Westside High School, we are known for individualized education, incredible opportunities, and proven success. Let us also be known for how we make others feel, and that we are truly making a difference by, each day, asking ourselves what we can do to simply #BeKind. Thank you for your ongoing support of Westside High School.

Athletic Hall of Fame and Coaches Night of Distinction

Congratulations to these outstanding Warrior athletes and Coach of the Year who were inducted into the Westside Athletic Hall of Fame on May 4, 2018!

A soccer standout between 2001 and 2005, Joe is the first soccer player inducted into the Westside Athletic Hall of Fame. In 2003, he was named Class A All-State. In 2004 he helped lead the Warriors to the State Championship, was named Nebraska All Super State, and honored as Captain of the Super State team.

Fred Hutchinson taught mathematics and coached football and track for 36 years in District 66. After 16 years at Arbor Heights, “Hutch” moved to the high school where he became Head Freshman Football Coach and Head Varsity Track Coach. Under his leadership, the Boys Track Team became a metro power, winning multiple Metro, District and State titles between 1997-2000. He was Metro Conference Coach of the Year during that time.

By amassing records of 117-0 singles and 22-0 doubles, Cami is considered one of the greatest tennis players in Nebraska high school athletics. She was a 4-year State Champion #1 Singles athlete, a 4-time Metro Champion and a 3-time High School All-American. Her teams were State Champions in 2004, 2005 and 2007.

If you are a parent receiving this newsletter rather than the alumnus, please ask them to update their address with us.

Longtime Westside educator, coach and Athletic Director Ron Huston was with Westside from 1965-1992, teaching social studies and coaching baseball before becoming Athletic Director. He was Nebraska Athletic Director of the Year in 1986 &amp; inducted into the Westside Hall of Fame in 2011. Huston passed away August 26, 2018. We are grateful to Coach Huston for dedicating so much of his life to our learners and student athletes.

Congratulations to these outstanding Warriors for their excellence in and out of the classroom.

These scholarships are awarded to seniors who have accumulated over 300 volunteer service hours while attending Westside High School.

This scholarship is awarded to a senior boy for demonstrating the academic and athletic work ethic of former Boys Varsity Basketball Coach and teacher, Tom Hall.

These scholarships are awarded to seniors who plan to pursue a career emphasizing mathematics and sciences.

This scholarship is awarded to a senior girl who exemplified former coach Vic Porter’s approach to athletics and academics.

Jacquelyn Platt attends the University of Nebraska at Kearney. .

Quinn Weidemann is attending The University of Wyoming.

JOIN THE The Club is the annual campaign through the Westside Foundation benefiting students and teachers throughout Westside Community Schools. In two short years, the Club has raised more than $110,000 for educational programs and innovative equipment. Last year was a banner year with over $65,000 raised by 280 members across the United States. Join your fellow alumni and friends by becoming a Club member.

Get this “Strength In Numbers” T-Shirt

Get other cool Westside Swag with your membership!

Thank you to our supporters who have invested in the following projects benefiting our students, teachers and community: Champions Plaza at Phelps Field Completed Fall 2015 The Little Theater Renovation Project at WHS Completed Fall 2018 Performing Arts Instruction Fund Completed Fall 2018 Engineering, Manufacturing &amp; Fabrication Center expansion project at WHS Scheduled Completion Winter 2019 What’s the next project you would like the Westside Foundation to research? We would love to hear from you! To learn more about the Westside Foundation and ways that you can make an impact today, please call us at 402-390-2133 or email us: westside.foundation@westside66.net

If you have any photos or contact updates from your reunions, please email them to the Alumni Association: alumni@westside66.net 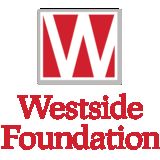