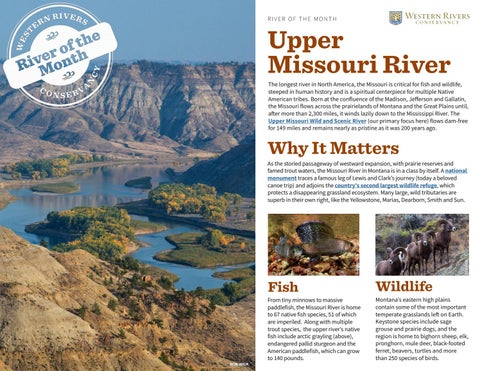 The longest river in North America, the Missouri is critical for fish and wildlife, steeped in human history and is a spiritual centerpiece for multiple Native American tribes. Born at the confluence of the Madison, Jefferson and Gallatin, the Missouri flows across the prairielands of Montana and the Great Plains until, after more than 2,300 miles, it winds lazily down to the Mississippi River. The Upper Missouri Wild and Scenic River (our primary focus here) flows dam-free for 149 miles and remains nearly as pristine as it was 200 years ago.

From tiny minnows to massive paddlefish, the Missouri River is home to 67 native fish species, 51 of which are imperiled. Along with multiple trout species, the upper river’s native fish include arctic grayling (above), endangered pallid sturgeon and the American paddlefish, which can grow to 140 pounds.

As the storied passageway of westward expansion, with prairie reserves and famed trout waters, the Missouri River in Montana is in a class by itself. A national monument traces a famous leg of Lewis and Clark’s journey (today a beloved canoe trip) and adjoins the country’s second largest wildlife refuge, which protects a disappearing grassland ecosystem. Many large, wild tributaries are superb in their own right, like the Yellowstone, Marias, Dearborn, Smith and Sun.

Montana’s eastern high plains contain some of the most important temperate grasslands left on Earth. Keystone species include sage grouse and prairie dogs, and the region is home to bighorn sheep, elk, pronghorn, mule deer, black-footed ferret, beavers, turtles and more than 250 species of birds.

To see the best of the Missouri River, head to the Upper Missouri National Wild and Scenic River stretch, which offers one of America’s finest multi-day boating trips for leisurely paddlers. This dam-free reach looks a lot like it did when Lewis and Clark followed it and flows gently past the iconic White Cliffs and through vast expanses of pristine prairie. There are plenty of campsites for star-gazing and side trails to explore the area’s rich history.

With prolific insect hatches and thousands of fish per mile, the “Mo” is one of the most famous trout-fishing destinations in the world. Blue-Ribbon trout waters begin below Holter Dam and run 30 miles to Cascade, with plentiful access. For more solitude, head for the Sun or Dearborn Rivers. There’s also plenty of trophy-sized walleye.

For memorable wildlife viewing and hunting for elk, antelope, deer and small game, head to the expansive Charles M. Russell Wildlife Refuge, one of the country’s largest. A self-guided auto tour of the refuge passes the Slippery Ann Elk Viewing Area. The refuge is also a designated Important Bird Area, home to more than 250 species of birds.

Floating Down the Mississippi Friends of the Missouri Breaks Monument

A classic American float, the Upper Missouri flows past 200-foot-tall sandstone formations and wildflowerspeckled prairie, all protected within the Upper Missouri River Breaks National Monument. To see the famous White Cliffs section, begin at Coal Banks and canoecamp for three nights to Judith Landing. Shuttles and guides are available.

In 2001, Western Rivers Conservancy reached out of its western focus area to protect one of best known river confluences in the country, the Missouri and Mississippi confluence. Where the two rivers meet—which is the storied launch point and endpoint of Lewis and Clark’s 1804-1806 expedition—WRC bought and permanently protected a 1,067-acre property. In addition to its historical significance, the lands included crucial wetlands that waterfowl utilize while migrating along the Mississippi Flyway. To conserve this special spot and establish a new recreation area, WRC transferred the land to the state of Missouri and city of St. Louis. Today, Edward “Ted” and Pat Jones Confluence Point State Park is a cherished destination for bird watchers, hikers and history buffs alike. One year later, in Montana, WRC protected access to some of the country’s most cherished fly fishing water when we conserved the Three Dollar Bridge site and three miles of the Madison River, a project you can read about in our May 2019 River of the Month.