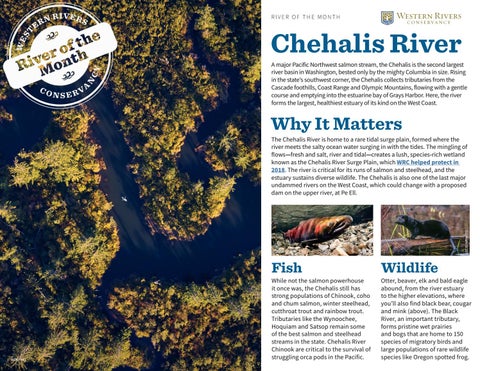 A major Pacific Northwest salmon stream, the Chehalis is the second largest river basin in Washington, bested only by the mighty Columbia in size. Rising in the state’s southwest corner, the Chehalis collects tributaries from the Cascade foothills, Coast Range and Olympic Mountains, flowing with a gentle course and emptying into the estuarine bay of Grays Harbor. Here, the river forms the largest, healthiest estuary of its kind on the West Coast.

The Chehalis River is home to a rare tidal surge plain, formed where the river meets the salty ocean water surging in with the tides. The mingling of flows—fresh and salt, river and tidal—creates a lush, species-rich wetland known as the Chehalis River Surge Plain, which WRC helped protect in 2018. The river is critical for its runs of salmon and steelhead, and the estuary sustains diverse wildlife. The Chehalis is also one of the last major undammed rivers on the West Coast, which could change with a proposed dam on the upper river, at Pe Ell.

While not the salmon powerhouse it once was, the Chehalis still has strong populations of Chinook, coho and chum salmon, winter steelhead, cutthroat trout and rainbow trout. Tributaries like the Wynoochee, Hoquiam and Satsop remain some of the best salmon and steelhead streams in the state. Chehalis River Chinook are critical to the survival of struggling orca pods in the Pacific.

Otter, beaver, elk and bald eagle abound, from the river estuary to the higher elevations, where you’ll also find black bear, cougar and mink (above). The Black River, an important tributary, forms pristine wet prairies and bogs that are home to 150 species of migratory birds and large populations of rare wildlife species like Oregon spotted frog.

With miles upon miles of gentle waters, the Chehalis has one of the longest free-flowing, canoe-friendly stretches of river on the West Coast. Grab your paddles (and a Washington Discover Pass) and choose your adventure—from the quiet sloughs of the Chehalis River Surge Plain Natural Area Preserve to the bird-rich bayous and prairies of the Black River, to Olympic Peninsula tributaries with ample drift boat put-ins for anglers.

Extensive water trails await paddlers in the Surge Plain preserve, where secluded sloughs meander through a 4,494acre wetland preserve (see Conservation). The Black River is another gem of a day-float with superb birding. It’s possible to float the lower (though mostly developed) 90 miles of the Chehalis, from Rainbow Falls State Park to Grays Harbor, which two adventurous reporters from The Daily Chronicle of Lewis County did back in 2008.

The Chehalis River Surge Plain is just as enjoyable on foot via an easy, seven-mile interpretive trail where you may spot osprey, otter and beaver beneath spruce and cedar trees that tower over the estuary. Upstream, a beautiful way to see the river is to hike (or bike) a segment of the 56-mile-long Willapa Hills Trail, a former railroad that connects the towns of Chehalis and South Bend. CO N S E R VAT I O N

The first big rain brings king, coho and chum salmon into the Chehalis River and tributaries like the Wynoochee and Satsop. The Wynoochee is known for both its winter and summer steelhead runs and is best fished with a boat. The Satstop and its tributaries are popular for salmon.

THE WRC STORY In 2018, WRC helped complete the 4,494-acre Chehalis River Surge Plain Natural Area Preserve, a rare type of wetland where the ocean tides surge into the fresh water, branching into winding finger-like channels, lined with water-loving plants and conifers. These quiet sloughs shelter diverse fish and wildlife, including spring and fall Chinook, coho and chum salmon, Olympic mudminnow, steelhead, river otter and beaver. In 1989, much of the surge plain was protected by the Washington Department of Natural Resources. Thirty years later, WRC was able to realize the initial vision of protecting the entire surge plain by partnering with Weyerhaeuser and transferring the remaining 1,469 acres to DNR. Now complete, the preserve provides paddlers with an outstanding system of water trails and offers hikers a series of trails to explore the lush wetland.

River of the Month - Chehalis River

River of the Month - Chehalis River