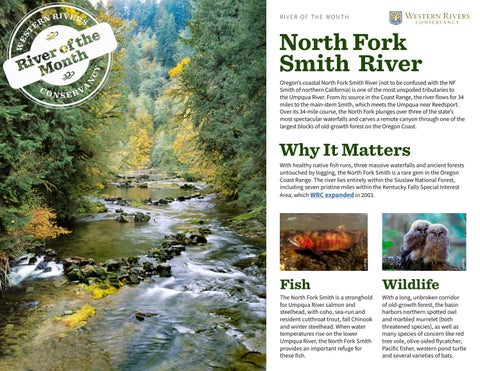 Oregonâ&#x20AC;&#x2122;s coastal North Fork Smith River (not to be confused with the NF Smith of northern California) is one of the most unspoiled tributaries to the Umpqua River. From its source in the Coast Range, the river flows for 34 miles to the main-stem Smith, which meets the Umpqua near Reedsport. Over its 34-mile course, the North Fork plunges over three of the stateâ&#x20AC;&#x2122;s most spectacular waterfalls and carves a remote canyon through one of the largest blocks of old-growth forest on the Oregon Coast.

With healthy native fish runs, three massive waterfalls and ancient forests untouched by logging, the North Fork Smith is a rare gem in the Oregon Coast Range. The river lies entirely within the Siuslaw National Forest, including seven pristine miles within the Kentucky Falls Special Interest Area, which WRC expanded in 2003.

With a long, unbroken corridor of old-growth forest, the basin harbors northern spotted owl and marbled murrelet (both threatened species), as well as many species of concern like red tree vole, olive-sided flycatcher, Pacific fisher, western pond turtle and several varieties of bats.

Located in the Siuslaw National Forest near Florence, Oregon, the North Fork Smith makes an easy daytrip from Eugene and a long day trip from Portland. Either way, it’s worth the effort. North Fork Smith River Road traces much of the lower river, but some of its most beautiful reaches, including the famed Kentucky Falls and one of the finest old-growth corridors in Oregon, are accessible only on foot. Contact the Forest Service for changing road and trail conditions.

The unquestionable highlight of the North Fork Smith is the 2.2mile Kentucky Falls Trail, which first passes Upper Kentucky Falls, and then reaches the show-stopping, side-byside cascades of Lower Kentucky Falls and North Fork Falls, at the confluence of Kentucky Creek and the NF Smith. Both falls are over 100 feet tall. From the viewing platform, you can turn back or continue on the North Fork Smith Trail, which traces the stream for another six-plus miles of primitive canyons and thick, old-growth forest. Expect a steep trek with downed trees and wilderness-like conditions.

You’ll have very little company if you venture out to chase cutthroat or steelhead on the North Fork, but you may find fish, and you’ll surely find great scenery. Bank access is available on public lands, and experienced boaters can float the lower stretch from North Fork Smith River Road. Check regulations carefully.

THE WRC STORY With its pristine rivers, ancient temperate rainforests, superb wildlife habitat and breathtaking waterfalls, the Kentucky Falls Special Interest Area is one of Oregon’s great natural treasures. It is also one of the last extensive swaths of old growth forest in the Oregon Coast Range, surrounded on all sides by Siuslaw National Forest. In 2003, Western Rivers Conservancy set out to permanently conserve the only private lands within the special interest area. Our goals were to keep the area’s unbroken oldgrowth forests intact, conserve over a mile of the North Fork Smith River, and ensure permanent public trail access to this special place. Owned by a timber company, the property was—and remains—home to trees that measure up to 10 feet wide. To keep these majestic forests standing, WRC purchased the property and conveyed it to the Siuslaw National Forest, ensuring permanent recreational access and protecting the area’s irreplaceable fish and wildlife habitat along the North Fork Smith forever.