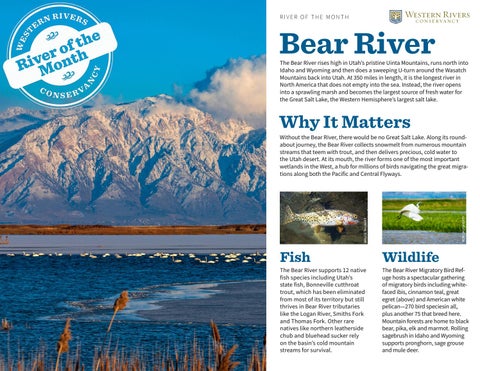 The Bear River rises high in Utah’s pristine Uinta Mountains, runs north into Idaho and Wyoming and then does a sweeping U-turn around the Wasatch Mountains back into Utah. At 350 miles in length, it is the longest river in North America that does not empty into the sea. Instead, the river opens into a sprawling marsh and becomes the largest source of fresh water for the Great Salt Lake, the Western Hemisphere’s largest salt lake.

Without the Bear River, there would be no Great Salt Lake. Along its roundabout journey, the Bear River collects snowmelt from numerous mountain streams that teem with trout, and then delivers precious, cold water to the Utah desert. At its mouth, the river forms one of the most important wetlands in the West, a hub for millions of birds navigating the great migrations along both the Pacific and Central Flyways.

The Bear River supports 12 native fish species including Utah’s state fish, Bonneville cutthroat trout, which has been eliminated from most of its territory but still thrives in Bear River tributaries like the Logan River, Smiths Fork and Thomas Fork. Other rare natives like northern leatherside chub and bluehead sucker rely on the basin’s cold mountain streams for survival.

Utah’s Bear River Migratory Bird Refuge, which WRC expanded in 2011, is a must-see. The Bear River’s headwaters are in the High Unintas Wilderness, which has spectacular hiking and backpacking. The scenic drives of the Logan Canyon Scenic Byway and Mirror Lake Highway are a wondeful way to take in the scenery of the Bear River basin. Two other national wildlife refuges, Cokeville Meadows in Wyoming and Bear Lake in Idaho, are both worth the trip.

Some of the best birding on Earth awaits visitors in the Bear River Migratory Bird Refuge. You can birdwatch year-round, and it’s best during the spring and fall migrations. Waterfowl peak in March and October and include tens of thousands of tundra swans, ducks and geese. You’ll also see white-faced ibis, black-necked stilt, Wilson’s phalarope, snowy plover and American avocet. Bring your bird list!

The Bear River Refuge is typically seen by a 12-mile auto loop. For hiking, head to the 55-mile Highline National Recreational Trail, which traverses the spine of the Bear River Range from the Utah border north to Soda Point, Idaho. Big elevation gains make for big views, sometimes clear to the Tetons.

Created in 1929, the Bear River Migratory Bird Refuge is a globally significant wetland complex that millions of birds depend on for survival. To expand the refuge and conserve vital marshlands adjacent to it, Western Rivers Conservancy protected two properties totaling more than 1,200 acres between 2008 and 2011. The properties feature open water and sheltered grasslands where an array of birds feed and nest, including ducks, geese, herons, tundra swan, American Pelican and black-necked stilts. With funding from the Land and Water Conservation Fund, we successfully added these critical marshlands to the 80,000-acre refuge. Located near the refuge entrance, the properties have also become an important part of the experience for tens of thousands of annual visitors.

River of the Month - Bear River

River of the Month - Bear River