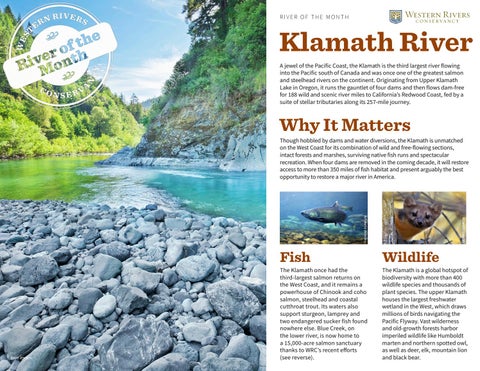 Klamath River A jewel of the Pacific Coast, the Klamath is the third largest river flowing into the Pacific south of Canada and was once one of the greatest salmon and steelhead rivers on the continent. Originating from Upper Klamath Lake in Oregon, it runs the gauntlet of four dams and then flows dam-free for 188 wild and scenic river miles to Californiaâ&#x20AC;&#x2122;s Redwood Coast, fed by a suite of stellar tributaries along its 257-mile journey.

The Klamath once had the third-largest salmon returns on the West Coast, and it remains a powerhouse of Chinook and coho salmon, steelhead and coastal cutthroat trout. Its waters also support sturgeon, lamprey and two endangered sucker fish found nowhere else. Blue Creek, on the lower river, is now home to a 15,000-acre salmon sanctuary thanks to WRCâ&#x20AC;&#x2122;s recent efforts (see reverse).

Though hobbled by dams and water diversions, the Klamath is unmatched on the West Coast for its combination of wild and free-flowing sections, intact forests and marshes, surviving native fish runs and spectacular recreation. When four dams are removed in the coming decade, it will restore access to more than 350 miles of fish habitat and present arguably the best opportunity to restore a major river in America.

The Klamath is a global hotspot of biodiversity with more than 400 wildlife species and thousands of plant species. The upper Klamath houses the largest freshwater wetland in the West, which draws millions of birds navigating the Pacific Flyway. Vast wilderness and old-growth forests harbor imperiled wildlife like Humboldt marten and northern spotted owl, as well as deer, elk, mountain lion and black bear.

The Klamath basin offers adventures as diverse as its terrain, from world-class birding to heart-pounding whitewater, Yurok cultural tours and some of the West’s most coveted fly fishing. With numerous wilderness areas, wildlife refuges and hundreds of miles of wild and scenic rivers to choose from, the Klamath promises experiences you won’t soon forget.

The Upper Klamath is a popular Class-IV trip packed with huge drops, waves and excitement. For families, the Lower Klamath is a multi-day adventure with loads of swimming, wildlife and Class II-III fun. For a tranquil paddle, try the Upper Klamath Canoe Trail. If you’d prefer fast and motorized, the Yurok Tribe operates full-speed jet boat tours up to Blue Creek (see Conservation at right).

The Klamath is renowned for its salmon and steelhead fishing. Yurok guide Pergish Carlson (707-951-1284) and Spey fishing guide Whitney Gould offer outstanding trips. As for Klamath tributaries, few trout destinations surpass the Williamson, Wood and Sprague rivers, which all flow into Upper Klamath Lake, the Klamath’s headwaters. For steelhead, hit the Trinity River, one of California’s best. Check regulations.

THE WRC STORY In the next decade, dam removals will signal a rebirth for the Klamath River. However, dams or no dams, without enough cold water entering the Klamath from its main tributaries, salmon will never survive the summer and fall migrations to the upper river. The first and most important stopping point for Klamath salmon is Blue Creek, where every migrating fish stops to cool down before continuing the journey upstream. In other words, Blue Creek is the lifeline of the Klamath system and the key to keeping its salmon runs alive. To protect this critical stream, WRC and the Yurok Tribe established the 47,097-acre Blue Creek Salmon Sanctuary and Yurok Community Forest in 2018, completing an historic, ten-year effort that will help guarantee the long-term health of the entire Klamath Siskiyou region. Upstream, WRC preserved a reach of the South Fork Trinity along one of the most productive spawning stretches for salmon and steelhead. And on the South Fork Scott, we are currently improving stream flows for salmon and protecting some of the best coho salmon habitat left in California.

River of the Month - Klamath River

River of the Month - Klamath River