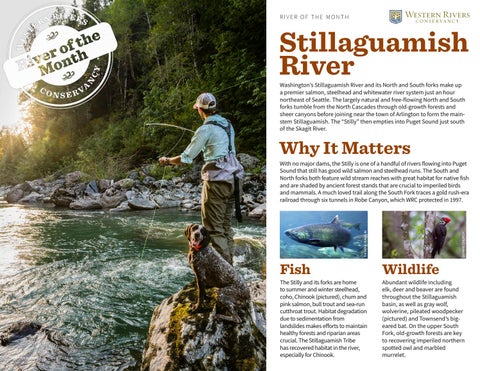 Stillaguamish River Washington’s Stillaguamish River and its North and South forks make up a premier salmon, steelhead and whitewater river system just an hour northeast of Seattle. The largely natural and free-flowing North and South forks tumble from the North Cascades through old-growth forests and sheer canyons before joining near the town of Arlington to form the mainstem Stillaguamish. The “Stilly” then empties into Puget Sound just south of the Skagit River.

The Stilly and its forks are home to summer and winter steelhead, coho, Chinook (pictured), chum and pink salmon, bull trout and sea-run cutthroat trout. Habitat degradation due to sedimentation from landslides makes efforts to maintain healthy forests and riparian areas crucial. The Stillaguamish Tribe has recovered habitat in the river, especially for Chinook.

With no major dams, the Stilly is one of a handful of rivers flowing into Puget Sound that still has good wild salmon and steelhead runs. The South and North forks both feature wild stream reaches with great habitat for native fish and are shaded by ancient forest stands that are crucial to imperiled birds and mammals. A much loved trail along the South Fork traces a gold rush-era railroad through six tunnels in Robe Canyon, which WRC protected in 1997.

A bucket-list-destination for advanced (or insane, depending on your point of view) boaters, Robe Canyon is one of the most famous Class-V runs in the nation. The 12-mile trip begins gently enough at Verlot Campground, and then the Stilly roars for three extreme miles through the boulder-strewn canyon, where boaters navigate harrowing chutes and heart-pounding drops.

The Stilly ranks high on the list of Washington steelhead destinations, especially the North Fork, which was the world’s first stream to be designated fly-fishing only (in 1949). The South Fork, though less-often fished, offers up the occasional steelhead, with plenty of quiet holes above Granite Falls and into the National Forest. Cutthroat trout and coho are also popular.

Go back in time hiking an old railroad grade in Robe Canyon Historic Park via the Old Robe Canyon Trail or the Lime Kiln Trail, which both offer plenty of history and gorge views. For old-growth hikes, Gold Basin Campground is a good launch point. The Big Four Ice Caves area has great snowshoeing and, in June, some of the best bird-watching in the North Cascades.

THE WRC STORY To preserve a cherished historic trail along the South Fork Stilly and a world-class whitewater run, Western Rivers Conservancy bought 880 acres from a timber company in beautiful Robe Canyon. After a seven-year effort, WRC and local partners at last cut the ceremonial ribbon on Robe Canyon Historic Park in 1997, when we conveyed the lands to Snohomish County. The project allowed local groups to protect a trail along an 1890s-era railroad grade, which passed through six rock tunnels that once carried gold from the nearby mining town of Monte Cristo. Thanks to our efforts, you can still see this piece of Northwest history for yourself. For boaters, the project also made access easier to Robe Canyon’s expert whitewater. Upstream, we prevented logging and landslides near Gold Basin when we bought 360 acres in the 1990s. We transferred the lands to the surrounding Mount Baker-Snoqualmie National Forest to uphold fragile fish runs and preserve oldgrowth forests where marbled murrelet and Northern spotted owl take refuge.

River of the Month - Stillaguamish River

River of the Month - Stillaguamish River