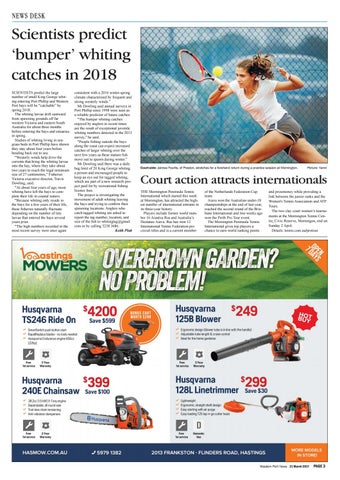 Scientists predict ‘bumper’ whiting catches in 2018 SCIENTISTS predict the large number of small King George whiting entering Port Phillip and Western Port bays will be “catchable” by spring 2018. The whiting larvae drift eastward from spawning grounds off far western Victoria and eastern South Australia for about three months before entering the bays and estuaries in spring. Studies of whiting living in seagrass beds in Port Phillip have shown they stay about four years before heading back out to sea. “Westerly winds help drive the currents that bring the whiting larvae into the bay, where they take about two years to reach the legal minimum size of 27 centimetres,” Fisheries Victoria executive director, Travis Dowling, said. “At about four years of age, most whiting have left the bays to complete their life in coastal waters. “Because whiting only reside in the bays for a few years of their life, these fisheries naturally fluctuate depending on the number of tiny larvae that entered the bays several years prior. “The high numbers recorded in the most recent survey were once again

consistent with a 2016 winter-spring climate characterised by frequent and strong westerly winds.” Mr Dowling said annual surveys in Port Phillip since 1998 were seen as a reliable predictor of future catches. “The bumper whiting catches enjoyed by anglers in recent times are the result of exceptional juvenile whiting numbers detected in the 2013 survey,” he said. “People fishing outside the bays along the coast can expect increased catches of larger whiting over the next few years as these mature fish move out to spawn during winter.” Mr Dowling said there was a daily bag limit of 20 King George whiting a person and encouraged people to keep an eye out for tagged whiting, which are part of a new research project paid for by recreational fishing licence fees. The project is investigating the movement of adult whiting leaving the bays and trying to confirm their spawning locations. Anglers who catch tagged whiting are asked to report the tag number, location, and size of the fish to whitingtag@gmail. com or by calling 5258 3686. Keith Platt

Court-side: Jaimee Fourlis, of Preston, stretches for a forehand return during a practice session at Mornington.

of the Netherlands Federation Cup team. Aiava won the Australian under-18 championships at the end of last year, reached the second round of the Brisbane International and two weeks ago won the Perth Pro Tour event. The Mornington Peninsula Tennis International gives top players a chance to earn world ranking points

and prizemoney while providing a link between the junior ranks and the Women's Tennis Association and ATP Tours. The two clay court women’s tournaments at the Mornington Tennis Centre, Civic Reserve, Morningon, end on Sunday 2 April. Details: tennis.com.au/protour