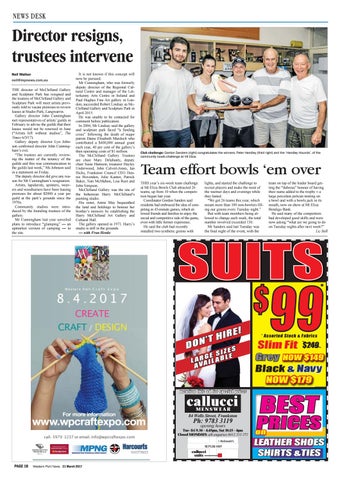 Director resigns, trustees intervene Neil Walker neil@mpnews.com.au THE director of McClelland Gallery and Sculpture Park has resigned and the trustees of McClelland Gallery and Sculpture Park will meet artists previously told to vacate premises to review leases at Studio Park, Langwarrin. Gallery director John Cunningham met representatives of artists’ guilds in February to advise the guilds that their leases would not be renewed in June (“Artists left without studios”, The Times 6/3/17). Gallery deputy director Lyn Johnson confirmed director John Cunningham’s exit. “The trustees are currently reviewing the matter of the tenancy of the guilds and this was communication to the guilds last week,” Ms Johnson said in a statement on Friday. The deputy director did give any reason for Mr Cunningham’s resignation. Artists, lapidarists, spinners, weavers and woodturners have been leasing premises for about $2000 a year per guild at the park’s grounds since the 1970s. Community studios were introduced by the founding trustees of the gallery. Mr Cunningham last year unveiled plans to introduce “glamping” — an upmarket version of camping — to the site.

It is not known if this concept will now be pursued. Mr Cunningham, who was formerly deputy director of the Regional Cultural Centre and manager of the Letterkenny Arts Centre in Ireland and Paul Hughes Fine Art gallery in London, succeeded Robert Lindsay as McClelland Gallery and Sculpture Park in April 2015. He was unable to be contacted for comment before publication. In 2004, Mr Lindsay said the gallery and sculpture park faced “a funding crisis” following the death of major patron Dame Elisabeth Murdoch who contributed a $400,000 annual grant each year, 40 per cent of the gallery’s then operating costs of $1 million. The McClelland Gallery Trustees are chair Mary Delahunty, deputy chair Susie Hamson, treasurer Hayley Underwood, John Calvert-Jones, Ian Hicks, Frankston Council CEO Dennis Hovenden, Julie Kantor, Patrick Baker, Tom McMahon, Lisa Roet and John Simpson. McClelland Gallery was the site of the bohemian Harry McClelland’s painting studio. His sister, Annie May bequeathed the land and holdings to honour her brother’s memory by establishing the Harry McClelland Art Gallery and Cultural Hall. The gallery opened in 1971. Harry’s studio is still in the grounds. — with Fran Henke

Team effort bowls ‘em over THIS year’s six-week team challenge at Mt Eliza Bowls Club attracted 26 teams, up from 10 when the competition began last year. Coordinator Gordon Sanders said residents had embraced the idea of competing in 45-minute games, which allowed friends and families to enjoy the social and competitive side of the game, even with little former experience. He said the club had recently installed two synthetic greens with

lights, and started the challenge to recruit players and make the most of the warmer days and evenings while they lasted. “We got 26 teams this year, which meant more than 100 non-bowlers filling our greens every Tuesday night.” But with team members being allowed to change each week, the total number involved exceeded 150. Mr Sanders said last Tuesday was the final night of the event, with the

team on top of the leader board getting the “dubious” honour of having their name added to the trophy – a large porcelain pelican nesting on a bowl and with a bowls jack in its mouth, now on show at Mt Eliza Bendigo Bank. He said many of the competitors had developed good skills and were now asking “what are we going to do on Tuesday nights after next week?” Liz Bell

mention this ad for special prices