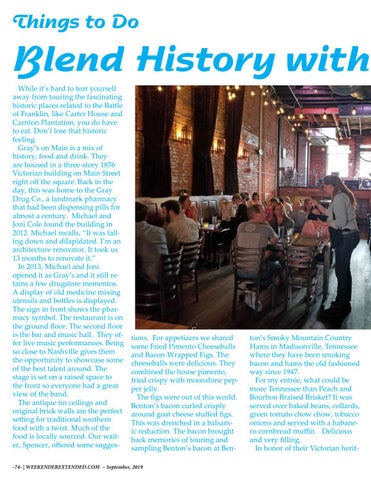 Blend History with While it’s hard to tear yourself away from touring the fascinating historic places related to the Battle of Franklin, like Carter House and Carnton Plantation, you do have to eat. Don’t lose that historic feeling. Gray’s on Main is a mix of history, food and drink. They are housed in a three-story 1876 Victorian building on Main Street right off the square. Back in the day, this was home to the Gray Drug Co., a landmark pharmacy that had been dispensing pills for almost a century. Michael and Joni Cole found the building in 2012. Michael recalls, “It was falling down and dilapidated. I’m an architecture renovator. It took us 13 months to renovate it.” In 2013, Michael and Joni opened it as Gray’s and it still retains a few drugstore mementos. A display of old medicine mixing utensils and bottles is displayed. The sign in front shows the pharmacy symbol. The restaurant is on the ground floor. The second floor is the bar and music hall. They offer live music performances. Being so close to Nashville gives them the opportunity to showcase some of the best talent around. The stage is set on a raised space to the front so everyone had a great view of the band. The antique tin ceilings and original brick walls are the perfect setting for traditional southern food with a twist. Much of the food is locally sourced. Our waiter, Spencer, offered some sugges-

tions. For appetizers we shared some Fried Pimento Cheeseballs and Bacon-Wrapped Figs. The cheeseballs were delicious. They combined the house pimento, fried crispy with moonshine pepper jelly. The figs were out of this world. Benton’s bacon curled crisply around goat cheese stuffed figs. This was drenched in a balsamic reduction. The bacon brought back memories of touring and sampling Benton’s bacon at Ben-

ton’s Smoky Mountain Country Hams in Madisonville, Tennessee where they have been smoking bacon and hams the old fashioned way since 1947. For my entrée, what could be more Tennessee than Peach and Bourbon Braised Brisket? It was served over baked beans, collards, green tomato chow chow, tobacco onions and served with a habanero cornbread muffin. Delicious and very filling. In honor of their Victorian herit-

Places to Go, things to do, and people to see across the U. S. for the fun side of life. Extended Weekend Getaways, featuring fall foodie fun and events.