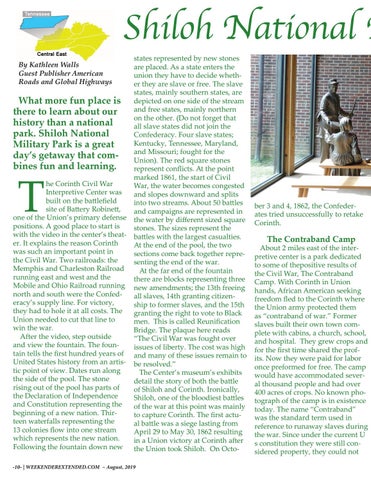 What more fun place is there to learn about our history than a national park. Shiloh National Military Park is a great day’s getaway that combines fun and learning.

he Corinth Civil War Interpretive Center was built on the battlefield site of Battery Robinett, one of the Union’s primary defense positions. A good place to start is with the video in the center’s theater. It explains the reason Corinth was such an important point in the Civil War. Two railroads: the Memphis and Charleston Railroad running east and west and the Mobile and Ohio Railroad running north and south were the Confederacy’s supply line. For victory, they had to hole it at all costs. The Union needed to cut that line to win the war. After the video, step outside and view the fountain. The fountain tells the first hundred years of United States history from an artistic point of view. Dates run along the side of the pool. The stone rising out of the pool has parts of the Declaration of Independence and Constitution representing the beginning of a new nation. Thirteen waterfalls representing the 13 colonies flow into one stream which represents the new nation. Following the fountain down new

states represented by new stones are placed. As a state enters the union they have to decide whether they are slave or free. The slave states, mainly southern states, are depicted on one side of the stream and free states, mainly northern on the other. (Do not forget that all slave states did not join the Confederacy. Four slave states; Kentucky, Tennessee, Maryland, and Missouri; fought for the Union). The red square stones represent conflicts. At the point marked 1861, the start of Civil War, the water becomes congested and slopes downward and splits into two streams. About 50 battles and campaigns are represented in the water by different sized square stones. The sizes represent the battles with the largest casualties. At the end of the pool, the two sections come back together representing the end of the war. At the far end of the fountain there are blocks representing three new amendments; the 13th freeing all slaves, 14th granting citizenship to former slaves, and the 15th granting the right to vote to Black men. This is called Reunification Bridge. The plaque here reads “The Civil War was fought over issues of liberty. The cost was high and many of these issues remain to be resolved.” The Center’s museum’s exhibits detail the story of both the battle of Shiloh and Corinth. Ironically, Shiloh, one of the bloodiest battles of the war at this point was mainly to capture Corinth. The first actual battle was a siege lasting from April 29 to May 30, 1862 resulting in a Union victory at Corinth after the Union took Shiloh. On Octo-

ber 3 and 4, 1862, the Confederates tried unsuccessfully to retake Corinth.

About 2 miles east of the interpretive center is a park dedicated to some of thepositive results of the Civil War, The Contraband Camp. With Corinth in Union hands, African American seeking freedom fled to the Corinth where the Union army protected them as “contraband of war.” Former slaves built their own town complete with cabins, a church, school, and hospital. They grew crops and for the first time shared the profits. Now they were paid for labor once preformed for free. The camp would have accommodated several thousand people and had over 400 acres of crops. No known photograph of the camp is in existence today. The name “Contraband” was the standard term used in reference to runaway slaves during the war. Since under the current U s constitution they were still considered property, they could not

Places to go, Things to do and People to see across the U.S. for the fun side of life. August issue featuring adventure theme parks.