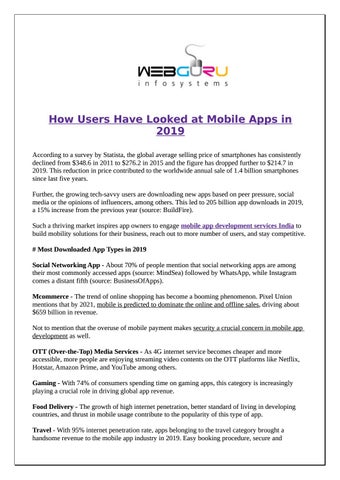 How Users Have Looked at Mobile Apps in 2019 According to a survey by Statista, the global average selling price of smartphones has consistently declined from $348.6 in 2011 to $276.2 in 2015 and the figure has dropped further to $214.7 in 2019. This reduction in price contributed to the worldwide annual sale of 1.4 billion smartphones since last five years. Further, the growing tech-savvy users are downloading new apps based on peer pressure, social media or the opinions of influencers, among others. This led to 205 billion app downloads in 2019, a 15% increase from the previous year (source: BuildFire). Such a thriving market inspires app owners to engage mobile app development services India to build mobility solutions for their business, reach out to more number of users, and stay competitive. # Most Downloaded App Types in 2019 Social Networking App - About 70% of people mention that social networking apps are among their most commonly accessed apps (source: MindSea) followed by WhatsApp, while Instagram comes a distant fifth (source: BusinessOfApps). Mcommerce - The trend of online shopping has become a booming phenomenon. Pixel Union mentions that by 2021, mobile is predicted to dominate the online and offline sales, driving about $659 billion in revenue. Not to mention that the overuse of mobile payment makes security a crucial concern in mobile app development as well. OTT (Over-the-Top) Media Services - As 4G internet service becomes cheaper and more accessible, more people are enjoying streaming video contents on the OTT platforms like Netflix, Hotstar, Amazon Prime, and YouTube among others. Gaming - With 74% of consumers spending time on gaming apps, this category is increasingly playing a crucial role in driving global app revenue. Food Delivery - The growth of high internet penetration, better standard of living in developing countries, and thrust in mobile usage contribute to the popularity of this type of app. Travel - With 95% internet penetration rate, apps belonging to the travel category brought a handsome revenue to the mobile app industry in 2019. Easy booking procedure, secure and

simplified transaction, and convenience are central to the rising popularity of the travel apps.

Transportation App - Do you know that with its availability in over 80 countries worldwide, 14 million Uber trips are completed per day! This speaks volume of the growing demand for such cab booking apps like Ola, Hailo, Lyft, etc. Check out our blog to learn the approximate cost of developing these popular mobile apps. # Introducing New Technologies and Features to Engage Users At one point in time, when one or two apps used to dominate a particular domain, the app owners retained control of the market. But as users became tech-savvy and Google Play Store (or Apple App Store) got overcrowded with numerous apps, the users are snatching the focal point. Now, since the entire landscape has turned upside down, the apps need to be developed and upgraded with cutting-edge technologies and trendy features to attract the attention of the users and survive in the market. For instance, some of the features and technologies adopted by the experts at any mobile app development agency in 2019 were as follow:

1. Augmented Reality Augmented Reality (AR) takes something from real-life and then modifies it. The AR system exhibits three features: real-time interaction, a combination of virtual and real-world, and an accurate 3D registration of real and virtual objects. One such example is the face filter option on Snapchat. Recently, Instagram and Facebook too implemented this feature. The seamless interweaving of virtual and real-world makes the technology favourable to the gaming app developers as well. Though the game Pokemon Go dates back to 2016, its craze makes it worth mentioning in this category. 2. Intuitive User Experience An intuitive user interface allows seamless navigability. Though different apps belonging to the same genre offer various layouts, colour palettes, and visuals, their basic features remain the same. For example, the “play”, “pause”, and “stop” icons in most music apps are similar. Again, Mcommerce apps have carts, music apps have playlists, and cab booking apps have maps. Such universal patterns in the layout and structure enhance the User Experience (UX) and people, too, prefer to use such easily navigable apps. 3. Syncing Wearable Technology with Mobile Devices Fitness bands to smartwatches, glasses to health care monitors - wearable technology is becoming increasingly popular and all of these gadgets can be paired with mobile apps. Right from checking the amount of calorie burnt to monitoring heart rates - everything can be tracked through such apps. Further, mobile apps are also syncing with home applications like air conditioning and heating equipment. Therefore, you can simply operate these devices with your smartphone app. Home security is also integrated with mobile technology. For instance, you may install a device like SimpliASafe Video Doorbell Pro at the door and check who is ringing your bell through the dedicated app. # How User Behaviour Changed App Marketing Strategy Enhancing the User Experience is becoming the ultimate focus of app owners in order to survive in the competitive market. To achieve this objective, the app marketers have introduced the following changes in their marketing strategies. 1. Push Notifications Let’s talk about some numbers first. A detailed study by BuildFire reveals, though people are spending about 87% of their time in using apps, individual apps get lesser attention. In fact, while an average person uses around 25 apps per month, 96% of the entire app-time is split among ten apps only. This indicates that over two-thirds of the downloaded apps are not used every month. This is where push-notifications can play a crucial role as it makes people aware of the services or offers of an app and attracts them to open it and avail the offer. Having said this, we must also note a significant change in this type of ad strategy. Even a few years back, whenever the users downloaded an app, their smartphones used to get flooded with push notifications from the app. This used to irritate the users leading most of them to uninstall the app. In fact, a study by CleverTap indicates that excessive notifications and ads lead to 28% of

people uninstall the offending apps. Thus, over-promotion proved to be self-defeating for the marketers and forced them to modify their marketing strategy. Nowadays, the apps send notifications less frequently so as not to overwhelm or irritate the users. This produces a significant impact in driving conversion. Let’s analyse it with an example. Nowadays, almost everyone is familiar with the Zomato app. Though you may not use it every day, it comes in handy when you have a plan to dine out or order food online. A push notification of a discount offer can compel you to avail it even if you didn’t have any plan to do the same initially. 2. Allotting Reasonable Space for Pop-Ups Nothing irritates consumers like a full-screen pop-up ad flashing on the screen while opening an app. In fact, the internet is flooded with user queries on how to block such ads. A study by Promatics suggests that 75% of users can even uninstall an app if they come across too many popups. A clever strategy adopted by the marketers to display the pop-up ad is to place it at the top or bottom quarter of the screen. That way, the main content of the app can be easily visible and accessed while offering enough visibility to the pop-ups as well. 3. Location-Based Marketing Mobile apps are becoming sharper in tracking your exact location. Further, have you observed an increase in apps asking for your location even if it’s not required to use the primary function of the app (as opposed to the cab booking apps like Uber)? This advances location-based marketing where the apps can identify the users’ locations and deliver a relevant message to them based on their current place. Core Location is such a location tracking technology used for Apple devices, and Android devices use Google Location Services to leverage the same benefit. Geofencing is one of the fundamental ways to trigger location-based messaging. A geofence is a virtual area around any location defined by latitude and longitude. Geofencing push notifications or Geopush are the notifications triggered when a user enters the geofenced location. An example will clarify the issue. Let’s assume, someone owns a restaurant and has a mobile app. Now, when you - an app user - walk within a few blocks of the restaurant, you may receive a notification about the special lunch menu of the restaurant. Conclusion So, we can see how user behaviour led the app developers and marketers to introduce significant changes in their strategies. And the professionals at any top mobile app development company predict this trend to sustain in the coming years as well. We can expect User Experience or UX to play a crucial role in keeping an app survive and thrive in the competitive market. What’s your take about it? Comment below and let us know! 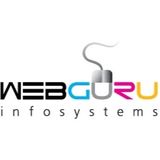 How Users Have Looked at Mobile Apps in 2019

Check out the 2019 flashback of how users looked at mobile apps, how it has influenced app developing and marketing strategies, the most pop...

How Users Have Looked at Mobile Apps in 2019

Check out the 2019 flashback of how users looked at mobile apps, how it has influenced app developing and marketing strategies, the most pop...