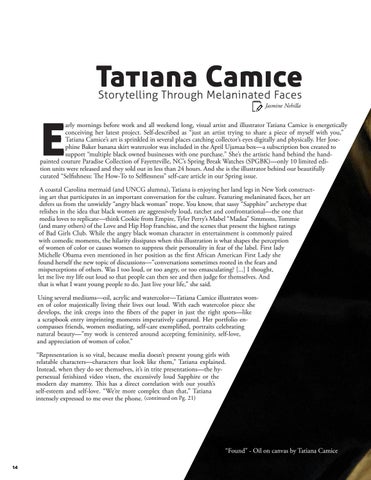 arly mornings before work and all weekend long, visual artist and illustrator Tatiana Camice is energetically conceiving her latest project. Self-described as “just an artist trying to share a piece of myself with you,” Tatiana Camice’s art is sprinkled in several places catching collector’s eyes digitally and physically. Her Josephine Baker banana skirt watercolor was included in the April Ujamaa box—a subscription box created to support “multiple black owned businesses with one purchase.” She’s the artistic hand behind the handpainted couture Paradise Collection of Fayetteville, NC’s Spring Break Watches (SPGBK)—only 10 limited edition units were released and they sold out in less than 24 hours. And she is the illustrator behind our beautifully curated “Selfishness: The How-To to Selflessness” self-care article in our Spring issue. A coastal Carolina mermaid (and UNCG alumna), Tatiana is enjoying her land legs in New York constructing art that participates in an important conversation for the culture. Featuring melaninated faces, her art defers us from the unwieldy “angry black woman” trope. You know, that sassy “Sapphire” archetype that relishes in the idea that black women are aggressively loud, ratchet and confrontational—the one that media loves to replicate—think Cookie from Empire, Tyler Perry’s Mabel “Madea” Simmons, Tommie (and many others) of the Love and Hip Hop franchise, and the scenes that present the highest ratings of Bad Girls Club. While the angry black woman character in entertainment is commonly paired with comedic moments, the hilarity dissipates when this illustration is what shapes the perception of women of color or causes women to suppress their personality in fear of the label. First lady Michelle Obama even mentioned in her position as the first African American First Lady she found herself the new topic of discussions—”conversations sometimes rooted in the fears and misperceptions of others. Was I too loud, or too angry, or too emasculating? [...] I thought, let me live my life out loud so that people can then see and then judge for themselves. And that is what I want young people to do. Just live your life,” she said. Using several mediums—oil, acrylic and watercolor—Tatiana Camice illustrates women of color majestically living their lives out loud. With each watercolor piece she develops, the ink creeps into the fibers of the paper in just the right spots—like a scrapbook entry imprinting moments imperatively captured. Her portfolio encompasses friends, women mediating, self-care exemplified, portraits celebrating natural beauty—”my work is centered around accepting femininity, self-love, and appreciation of women of color.” “Representation is so vital, because media doesn’t present young girls with relatable characters—characters that look like them,” Tatiana explained. Instead, when they do see themselves, it’s in trite presentations—the hypersexual fetishized video vixen, the excessively loud Sapphire or the modern day mammy. This has a direct correlation with our youth’s self-esteem and self-love. “We’re more complex than that,” Tatiana intensely expressed to me over the phone. (continued on Pg. 21)

We Are Greensboro magazine is dedicated to serving our community by supporting our local businesses, artisans & events. KEEP IT LOCAL! 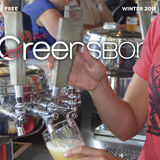