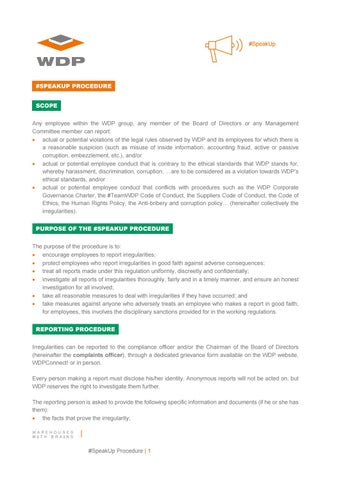 #SPEAKUP PROCEDURE SCOPE Any employee within the WDP group, any member of the Board of Directors or any Management Committee member can report: • actual or potential violations of the legal rules observed by WDP and its employees for which there is a reasonable suspicion (such as misuse of inside information, accounting fraud, active or passive corruption, embezzlement, etc.), and/or • actual or potential employee conduct that is contrary to the ethical standards that WDP stands for, whereby harassment, discrimination, corruption, …are to be considered as a violation towards WDP’s ethical standards, and/or • actual or potential employee conduct that conflicts with procedures such as the WDP Corporate Governance Charter, the #TeamWDP Code of Conduct, the Suppliers Code of Conduct, the Code of Ethics, the Human Rights Policy, the Anti-bribery and corruption policy… (hereinafter collectively the irregularities). PURPOSE OF THE #SPEAKUP PROCEDURE The purpose of the procedure is to: • encourage employees to report irregularities; • protect employees who report irregularities in good faith against adverse consequences; • treat all reports made under this regulation uniformly, discreetly and confidentially; • investigate all reports of irregularities thoroughly, fairly and in a timely manner, and ensure an honest investigation for all involved; • take all reasonable measures to deal with irregularities if they have occurred; and • take measures against anyone who adversely treats an employee who makes a report in good faith; for employees, this involves the disciplinary sanctions provided for in the working regulations. REPORTING PROCEDURE Irregularities can be reported to the compliance officer and/or the Chairman of the Board of Directors (hereinafter the complaints officer), through a dedicated grievance form available on the WDP website, WDPConnect! or in person. Every person making a report must disclose his/her identity. Anonymous reports will not be acted on, but WDP reserves the right to investigate them further. The reporting person is asked to provide the following specific information and documents (if he or she has them): • the facts that prove the irregularity;

During and after the handling of the report, the complaints officer may not disclose the identity of the reporting person, nor may he disclose elements that make it possible to discover the person’s identity, unless this is absolutely necessary in the context of the investigation and/or in order to remedy the irregularity; in any case, it is never done without the prior consent of the reporting person. The reporting person is also expected to treat the submission and handling of his/her report as strictly confidential and not to spread information about it. WDP also ensures that a person who reports an irregularity in good faith will in no way undergo any negative consequence arising from or in connection with such a report. As such, no civil, criminal or disciplinary claims can be filed, nor can professional sanctions be imposed due to the report. The reporting person is also not considered to be infringing any agreement, or any limitation of disclosure or of communication of information imposed by law or regulations, and cannot be held liable in any way for reporting this information. The fact that it may appear that the report is unfounded after the investigation of the alleged irregularity is irrelevant. The aforementioned protection is not guaranteed to the person who submits a report in bad faith (i.e. wilfully makes false statements; participates in the irregularity himself/herself; submits an evidently unfounded report or submits such a report with frivolous or malicious intent). COMMITMENTS TO THE PERSON ABOUT WHOM THE IRREGULARITY WAS REPORTED The complaints officer informs the person about whom the irregularity was reported about the existence of the report in due time. In particular, the complaints officer provides the following information: • • •

the alleged facts; the internal or external services to whom the details of the report or the result of the investigation may be communicated; and how the person can exercise his/her rights.

The legal basis for the processing of personal data as part of this internal procedure for employees is based on the legal obligation of WDP to provide for appropriate internal procedures for reporting actual or potential violations of the rules referred to in Article 45 of the Act of 2 August 2002 on the oversight of the financial sector and financial services and/or on the legitimate interest WDP has in being able to defend its interests and those of its employees in court, if necessary, and to comply with ethical standards as reflected in documents such as the Corporate Governance Charter, the Code of Ethics, the #TeamWDP Code of Conduct, the Supplier Code of Conduct. WDP can pass on personal data to external advisors, competent authorities and regulators. If a report proves to be unfounded, WDP will delete personal data within a reasonable period of time. If a report proves to be well-founded, or if a report proves to be evidently unfounded, WDP will retain personal data for as long as is necessary for the purpose of taking measures, imposing penalties or for its defence in court. Persons whose data are processed within the context of a report of an irregularity have a right to access their personal data. They can have their personal data corrected, ask that their personal data be deleted, or limit the processing of the data. They may also oppose the processing of their personal data on compelling legitimate grounds. The exercise of the aforementioned rights may be subject to conditions. However, these rights do not imply a right to access the personal data of other persons. Persons whose data are processed within the context of a report of an irregularity also have a right to file a complaint with the supervisory authority (in Belgium: the Data Protection Authority (commission@privacycommission.be).

REGISTER OF FILED REPORTS The identity of the reporting person is anonymised in the register when the register must be made public (e.g. at the request of the FSMA, or in the context of an internal or external audit). The register of filed reports is only accessible to the compliance officer or the Chairman of the Board of Directors.

WDP is committed to continuous improvement and seeks to appropriately address feedback received from its stakeholders such as clients, investors, employees, suppliers, the local community….We maintain procedures to address grievances formally raised by stakeholders in relation to WDP, our warehouses, our services, or any processes we apply. On this page you may find more information on these procedures as well as the dedicated forms to report such grievances. 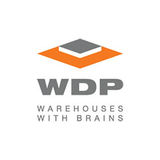