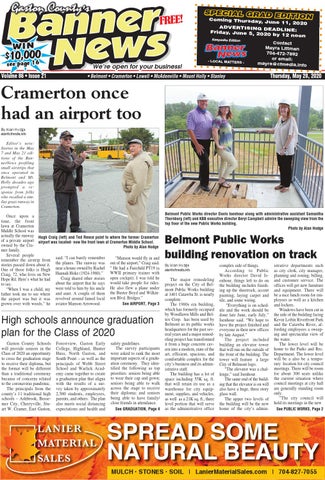 Cramerton once had an airport too By Alan Hodge alan@cfmedia.info

Editor’s note: Stories in the May 7 and May 21 editions of the BannerNews profiling small airstrips that once operated in Belmont and Mt. Holly decades ago prompted a response from folks who recalled a similar grass runway in Cramerton. Once upon a time, the front lawn at Cramerton Middle School was actually the runway Hugh Craig (left) and Ted Reece point to where the former Cramerton of a private airport airport was located- now the front lawn at Cramerton Middle School. owned by the CraPhoto by Alan Hodge mer family. Several people “Manson would fly in and remember the airstrip from said. “I can barely remember the planes. The runway was out of the airport,” Craig said. stories passed down about it. near a house owned by Rachel “ He had a Fairchild PT19 (a One of those folks is Hugh WWII primary trainer with Hannah Hoke (1924-1980).” Craig, 72, who lives on New Craig shared other stories open cockpit). I was told he Hope Rd. Here’s what he had about the airport that he says would take people for rides. to say. “When I was a child, my were told to him by his uncle He also flew a plane under father took me to see where and aunt. A couple of them the Buster Boyd and Wilkinthe airport was but it was revolved around famed local son Blvd. Bridges.” grown over with weeds,” he aviator Manson Arrowood. See AIRPORT, Page 3

High schools announce graduation plan for the Class of 2020 Gaston County Schools will provide seniors in the Class of 2020 an opportunity to cross the graduation stage to receive their diploma, but the format will be different than a traditional ceremony because of concerns related to the coronavirus pandemic. The principals from the county’s 11 traditional high schools – Ashbrook, Bessemer City, Cherryville, Stuart W. Cramer, East Gaston,

Forestview, Gaston Early College, Highland, Hunter Huss, North Gaston, and South Point – as well as the principals of Webb Street School and Warlick Academy came together to create a graduation plan that aligns with the results of a survey taken by approximately 2,500 students, employees, parents, and others. The plan also meets social distancing expectations and health and

The major remodeling project on the City of Belmont Public Works building at 1401 Catawba St. is nearly complete. The 1980s era building, which has formerly occupied by Woodlawn Mills and Beltex Corp. has been used by Belmont as its public works headquarters for the past several years and a major remodeling project has transformed it from a huge concrete cavern into a modern, state of the art, efficient, spacious, and comfortable complex for the city’s business and its administrative staff. The building has a lot of space including 55K sq. ft. that will retain its use as a warehouse for city equipment, supplies, and vehicles, as well as a 21K sq. ft., three level portion that will serve as the administrative office

complex side of things. According to Public Works director David Isenhour, things left to do on the building includes finishing up the sheetrock, accent painting, laying carpet and tile, and some wiring. “Everything is on schedule and the work should be done late June, early July.” Isenhour said. “We hope to have the project finished and everyone in their new offices by late August.” The project included building an elevator tower that will run on the outside of the front of the building. The tower will feature a large City of Belmont logo. “The elevator was a challenge,” said Isenhour. The same end of the building that the elevator is on will also have a huge, three story glass wall. The upper two levels of the building will be the new home of the city’s admin-

istrative departments such as city clerk, city manager, planning and zoning, billing, and customer service. The offices will get new furniture and equipment. There will be a nice lunch room for employees as well as a kitchen and lockers. Windows have been cut in the side of the building facing Kevin Loftin Riverfront Park and the Catawba River, affording employees a sweeping and spectacular view of the water. The lower level will be home to the Parks and Rec. Department. The lower level will be a also be a temporary location for city council meetings. There will be room for about 300 seats unlike the current situation where council meetings at city hall are generally standing room only. “The city council will hold its meetings in the new See PUBLIC WORKS, Page 2