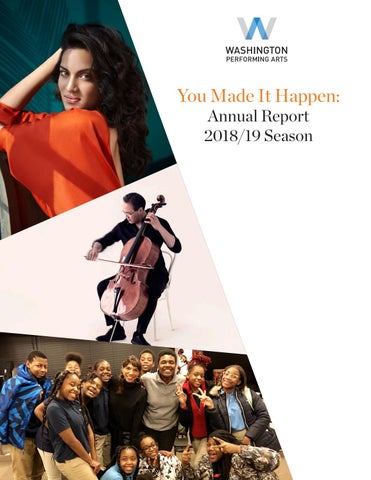 A Note from Jenny Bilfield Powerful artistic expression. Generous support. Dedicated instruction. Hard work. And fun. All of this stems from the people at the heart of Washington Performing Arts. In 2018/19, more than 180 individuals comprised Washington Performing Arts’ Board of Directors, Junior Board, Women’s Committee, and staff, fueling the organization behind the scenes with ardor and commitment. And tens of thousands of donors and audience members lent their own support, in unique ways. Plus, hundreds of teaching artists, teachers, and diplomats served tens of thousands of students and lifelong learners throughout the district—27,000 alone through our D.C. Keys program in the D.C. Public Schools! Similarly, thousands of artists on our main stage and Mars Arts D.C. stages throughout all eight wards brought transcendent artistic experiences to more than 56,000 passionate audience members last season. The images that open and close this year’s annual report speak to the range and breadth of these moments that you made possible: •

These were just a few highlights amongst a season that included thousands of magical moments. Reflecting back on each and every one brings a smile and deep feelings of gratitude. Thank you for welcoming us into your lives, and thank you for the visions of generosity and warmth that grace these pages.

The team that made the impossible possible. I am so grateful to all of you.

Everyone at thanks you for an

Photos (L-R from top): Board members with H.E. Vlora Çitaku, Ambassador of Kosovo; Artists and Staff celebrating at the close of the Sizzle & Swing Gala; Board and Staff at the Gala; Members of the United States Air Force Band’s Singing Sergeants at Whittier Education Campus; Women’s Committee members at the Legacy Society annual event; Kosovar tenor Rame Lahaj in performance at the Cosmos Club 4

2018/19 was brimming with main stage highlights, including Yo-Yo Ma’s Bach Cello Suites, showcased on pages 8-9. We explored themes of home, cultural history, and identity with artists around the world and heard extraordinary orchestras like the seasoned Czech Philharmonic and the West-Eastern Divan Orchestra, both on their first American tours in many years. And we experienced superb artistry across generations: from the staggering gifts of Hammond organ virtuoso Dr. Lonnie Smith and pianist Leon Fleisher, both playing professionally for more than six decades, to fresh talent on the rise in our beloved Hayes Series and other recitals. Truly, this year’s main stage season offered countless moments of discovery and even transcendence. #WeMakeItHappen

Circle Only use blue and/or white. For more details check out our Brand Guidelines.

In 2018/19, Washington Performing Arts fully embraced its role as producer and presenter, amplifying Yo-Yo Ma’s sold-out main stage performance at Washington National Cathedral to an audience of more than 5,000 at Union Station and hundreds of thousands more around the world through 60+ additional performers, eight phenomenal partnerships, and one extraordinary livestream. Our reach extended further in 2018/19 through our original production, On the Air: A Glenn Miller Swing Celebration, produced in collaboration with The U.S. Air Force Band—and broadcasting throughout the country in 2019/20. #YoYoinDC

On the Air: A Glenn Miller Swing Celebration: Lyn and Barry Chasen and Altria Group, Inc.

Dear WPA, As the daughter of someone who served in the Merchant Marines in World War II, I was SO moved by last night’s Glenn Miller program at Strathmore. By taking me back to that WWII era, I was really able to see what an important role Glenn Miller’s music played in keeping spirits bright during that very dark time. Last night’s program was the best I’ve ever attended. It brought together all the performing arts in service of something greater: recognizing the courage and conviction of those who serve in America’s military. Attending was not just a pleasure, but an honor. –Marilyn Millstone Friend of Washington Performing Arts

Looking ahead to 2020/21: Board and Junior Board members and staff journeyed to Toronto’s Volcano Theatre in January to preview a reimagining of Scott Joplin’s Treemonisha, co-commissioned by Washington Performing Arts alongside Cal Performances, Banff Centre for the Arts, and others. February 2019 saw a preview at the Congressional Black Caucus Foundation 10th Annual AVOICE Heritage Celebration. (Pictured: Rep. Maxine Waters with composer/violinist Jannina Norpoth and soprano Neema Bickersteth; Board members, artistic team, and staff in Toronto)

The World in Our City: On the Main Stage, In the Classroom, Throughout Our Community

Circle Only use blue and/or white. For more details check out our Brand Guidelines.

EAP in Action: Learning about birds of prey with the Embassy of the Kingdom of Bahrain and Vikings with the Embassies of Denmark, Finland, Norway, and Sweden. The Embassy Adoption Program is a partnership between Washington Performing Arts and D.C. Public Schools.

World in Our City programming continued to flourish in 2018/19, through 12 months of Latinx in D.C. programming connected to our Dreamers world-premiere simulcast, 85 Embassy Adoption Program partnerships, and 30+ events on the main stage and in our community that celebrated artists and ensembles from 99 different countries. #WorldinOurCity #LatinxinDC

Thank you for allowing us to be a part of this… So happy to have shared the stage with amazing performers—especially to see our youth have such powerful performances.

Latinx in D.C. was a 12-month, 25-event, 20-partner series spotlighting the vibrant contributions of D.C.-based Latinx artists through timely and relevant conversations, collaborations, performances, and reflections around identity, social justice, and current events. The project was anchored by WPA’s co-commissioned oratorio, Dreamers, by Jimmy López and Nilo Cruz, which was presented in a free public simulcast in March 2019, powerfully capturing in words and music the human toll of the immigration crisis as performed by the Philharmonia Orchestra. Nearly 80 local Latinx artists performed in venues throughout the city, and the series received frequent coverage in Spanish-language media. 11

Washington Performing Arts is one of our very favorite and most appreciated partners.

In 2018/19 Mars Arts D.C. continued successful collaborations with The LINE DC (top) as well as with the Library of Congress (above), through its Summer Concerts on the Lawn series. Ensemblesin-Residence brought their artistry to the main stage at Sixth & I, both alone and alongside students that they coached through Washington Performing Arts’ Capital Jazz Partnership.

From the Classroom to the Stage:

Education and Gospel Programs Shine Exposure, participation, and performance. No matter the entry-point—and with social and emotional learning at the core—Washington Performing Arts’ education programs thrived in 2018/19. Through more than 900 events and programs that reached 131 D.C. area schools in all eight wards and beyond, we served 43,000+ students as well as lifelong learners, many through our partnership with D.C. Public Schools. And we continued to realize our multi-year strategy for growing and strengthening our gospel music programs in all dimensions: more knowledge in the classroom, more performances on the main stage, and more investment. #WeMakeArtsEdHappen

SPECIAL THANKS D.C. Public Schools, for their partnership around Embassy Adoption Program, Capital Arts Partnerships, and so many of our programs. Jacqueline Badger Mars and Mars, Incorporated; U.S. Commission of Fine Arts and the National Capital Arts and Cultural Affairs program; The Morris & Gwendolyn Cafritz Foundation; D.C. Commission on the Arts & Humanities; and more than 30 individual, corporate, and foundation donors fuel our education and gospel programs.

Because of arts education, my students are afforded opportunities to have meaningful experiences that will influence them not only as musicians, but will dictate their future choices and how they navigate this world as contributing members of society for the rest of their lives.

I can’t thank all of you enough for the amazing opportunity. The scholarship is really appreciated—I wish I could thank the people who donated. It really means so much to me!!

ABOVE: Jordan Embrack—a member of the Children of the Gospel Choir for nine years (pictured here with Jenny Bilfield and COTG Artistic Director Michele Fowlin)—was the inaugural recipient of “The Reggie,” named for WPA’s past Chairman Reginald Van Lee. Her path continues at Philadelphia’s selective University of the Arts, where she will major in musical theater. WPA also celebrated seven Charlotte Schlosberg Scholars in a public recital showcasing the students’ growth through private study afforded by the program. LEFT: Offstage, we enhanced our gospel music programs’ experiences with the addition of a formal Music Director, new musicianship exercises and gospel music history classes for participants, and pre-show talks for audiences (Pictured left: WPA Manager of Choir Curriculum and Performance Raynetta Wiggins-Jackson and Phillip Carter in dialogue at Strathmore)

Extraordinary Events Honor Extraordinary People and Programs A pair of special events—the Sizzle & Swing Gala and Auction and a luncheon honoring President Emeritus Douglas Wheeler’s 50 years of selfless and visionary service to Washington Performing Arts—raised more than $1.06 million to support our programs on the main stage, in the classroom, and through the community.

More than 100 guests—including Board, Honorary Board, and Women’s Committee members, past and present— gathered to celebrate the leadership of Doug Wheeler at the exquisite home of WPA Board member Debbie Driesman and her husband, Frank Islam. (Pictured here, L-R from top: Past Chairs Lena Scott Lundh and Lydia Micheaux Marshall with Doug; Women’s Committee members with Doug; Past Board members with Past Chair Danny Korengold)

When available, audited financial statements will be available at WashingtonPerformingArts.org/AnnualReport. 18

Your support in 2018/19 made so much happen â&#x20AC;&#x201C; THANK YOU! WPA Teaching Artists collectively provided

38 venues across the D.C. area

speakers took the stage throughout all eight wards

Current and Past Presidents Jenny Bilfield

Board of Directors Anthony Otten 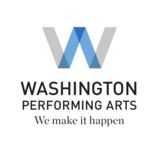