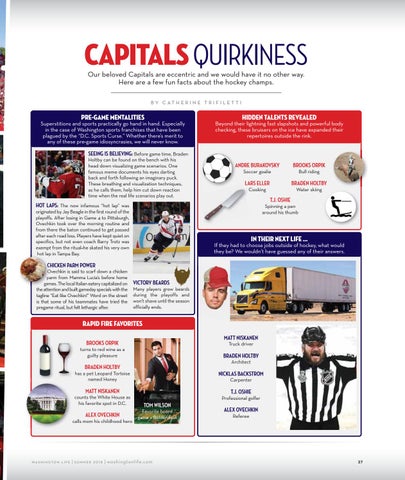 CAPITALS QUIRKINESS Our beloved Capitals are eccentric and we would have it no other way. Here are a few fun facts about the hockey champs. BY C AT H E R I N E T R I F I L E T T I

Superstitions and sports practically go hand in hand. Especially in the case of Washington sports franchises that have been plagued by the “D.C. Sports Curse.” Whether there’s merit to any of these pre-game idiosyncrasies, we will never know.

SEEING IS BELIEVING: Before game time, Braden Holtby can be found on the bench with his head down visualizing game scenarios. One famous meme documents his eyes darting back and forth following an imaginary puck. These breathing and visualization techniques, as he calls them, help him cut down reaction time when the real life scenarios play out.

Beyond their lightning fast slapshots and powerful body checking, these bruisers on the ice have expanded their repertoires outside the rink.

Spinning a pen around his thumb

originated by Jay Beagle in the first round of the playoffs. After losing in Game 4 to Pittsburgh, Ovechkin took over the morning routine and from there the baton continued to get passed after each road loss. Players have kept quiet on specifics, but not even coach Barry Trotz was exempt from the ritual–he skated his very own hot lap in Tampa Bay.

IN THEIR NEXT LIFE …

If they had to choose jobs outside of hockey, what would they be? We wouldn’t have guessed any of their answers.

CHICKEN PARM POWER Ovechkin is said to scarf down a chicken parm from Mamma Lucia’s before home games. The local Italian eatery capitalized on the attention and built gameday specials with the tagline “Eat like Ovechkin!” Word on the street is that some of his teammates have tried the pregame ritual, but felt lethargic after.

VICTORY BEARDS Many players grow beards during the playoffs and won’t shave until the season officially ends.

turns to red wine as a guilty pleasure

MATT NISKANEN counts the White House as his favorite spot in D.C.