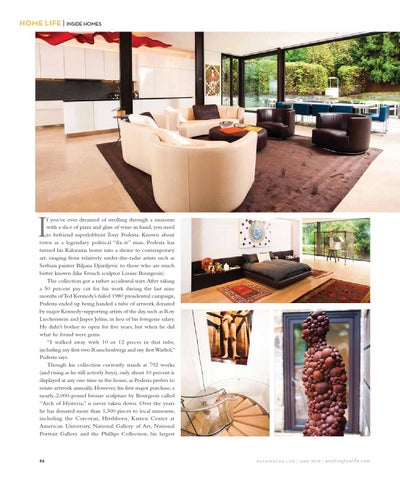 f you’ve ever dreamed of strolling through a museum with a slice of pizza and glass of wine in hand, you need to befriend superlobbyist Tony Podesta. Known about town as a legendary political “fix-it” man, Podesta has turned his Kalorama home into a shrine to contemporary art, ranging from relatively under-the-radar artists such as Serbian painter Biljana Djurdjevic to those who are much better known (like French sculptor Louise Bourgeois). The collection got a rather accidental start. After taking a 50 percent pay cut for his work during the last nine months of Ted Kennedy’s failed 1980 presidential campaign, Podesta ended up being handed a tube of artwork donated by major Kennedy-supporting artists of the day, such as Roy Liechenstein and Jasper Johns, in lieu of his foregone salary. He didn’t bother to open for five years, but when he did what he found were gems. “I walked away with 10 or 12 pieces in that tube, including my first two Rauschenbergs and my first Warhol,” Podesta says. Though his collection currently stands at 792 works (and rising as he still actively buys), only about 10 percent is displayed at any one time in the house, as Podesta prefers to rotate artwork annually. However, his first major purchase, a nearly-2,000-pound bronze sculpture by Bourgeois called “Arch of Hysteria,” is never taken down. Over the years he has donated more than 1,300 pieces to local museums, including the Corcoran, Hirshhorn, Katzen Center at American University, National Gallery of Art, National Portrait Gallery and the Phillips Collection; his largest

From the June 2015 issue of Washington Life Magazine

From the June 2015 issue of Washington Life Magazine