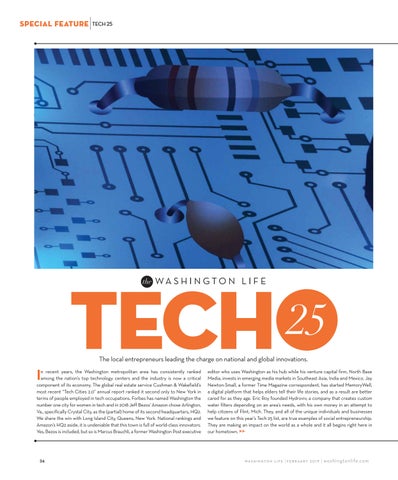 The local entrepreneurs leading the charge on national and global innovations.

n recent years, the Washington metropolitan area has consistently ranked among the nation’s top technology centers and the industry is now a critical component of its economy. The global real estate service Cushman & Wakefield’s most recent “Tech Cities 2.0” annual report ranked it second only to New York in terms of people employed in tech occupations. Forbes has named Washington the number one city for women in tech and in 2018 Jeff Bezos’ Amazon chose Arlington, Va., specifically Crystal City, as the (partial) home of its second headquarters, HQ2. We share the win with Long Island City, Queens, New York. National rankings and Amazon’s HQ2 aside, it is undeniable that this town is full of world-class innovators. Yes, Bezos is included, but so is Marcus Brauchli, a former Washington Post executive

editor who uses Washington as his hub while his venture capital firm, North Base Media, invests in emerging media markets in Southeast Asia, India and Mexico. Jay Newton-Small, a former Time Magazine correspondent, has started MemoryWell, a digital platform that helps elders tell their life stories, and as a result are better cared for as they age. Eric Roy founded Hydroviv, a company that creates custom water filters depending on an area’s needs, with his own money in an attempt to help citizens of Flint, Mich. They, and all of the unique individuals and businesses we feature on this year’s Tech 25 list, are true examples of social entrepreneurship. They are making an impact on the world as a whole and it all begins right here in our hometown.