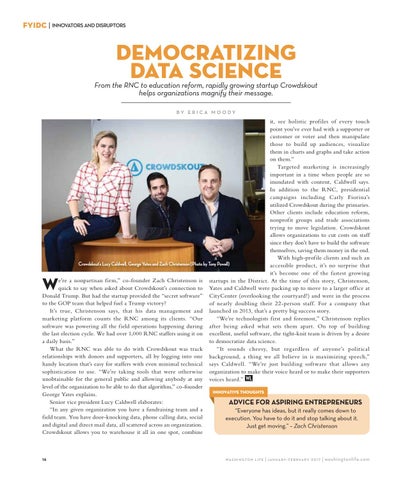 it, see holistic prof iles of every touch point you’ve ever had with a supporter or customer or voter and then manipulate those to build up audiences, visualize them in charts and graphs and take action on them.” Targeted marketing is increasingly important in a time when people are so inundated with content, Caldwell says. In addition to the RNC, presidential campaigns including Carly Fiorina’s utilized Crowdskout during the primaries. Other clients include education reform, nonprofit groups and trade associations trying to move legislation. Crowdskout allows organizations to cut costs on staff since they don’t have to build the software themselves, saving them money in the end. With high-profile clients and such an Crowdskout’s Lucy Caldwell, George Yates and Zach Christenson (Photo by Tony Powell) accessible product, it’s no surprise that it’s become one of the fastest growing e’re a nonpartisan firm,” co-founder Zach Christenson is startups in the District. At the time of this story, Christenson, quick to say when asked about Crowdskout’s connection to Yates and Caldwell were packing up to move to a larger office at Donald Trump. But had the startup provided the “secret software” CityCenter (overlooking the courtyard!) and were in the process to the GOP team that helped fuel a Trump victory? of nearly doubling their 22-person staff. For a company that It’s true, Christenson says, that his data management and launched in 2013, that’s a pretty big success story. marketing platform counts the RNC among its clients. “Our “We’re technologists first and foremost,” Christenson replies software was powering all the field operations happening during after being asked what sets them apart. On top of building the last election cycle. We had over 1,000 RNC staffers using it on excellent, useful software, the tight-knit team is driven by a desire a daily basis.” to democratize data science. What the RNC was able to do with Crowdskout was track “It sounds cheesy, but regardless of anyone’s political relationships with donors and supporters, all by logging into one background, a thing we all believe in is maximizing speech,” handy location that’s easy for staffers with even minimal technical says Caldwell. “We’re just building software that allows any sophistication to use. “We’re taking tools that were otherwise organization to make their voice heard or to make their supporters unobtainable for the general public and allowing anybody at any voices heard.” level of the organization to be able to do that algorithm,” co-founder INNOVATIVE THOUGHTS George Yates explains. Senior vice president Lucy Caldwell elaborates: ADVICEFORASPIRINGENTREPRENEURS “In any given organization you have a fundraising team and a “Everyone has ideas, but it really comes down to field team. You have door-knocking data, phone calling data, social execution. You have to do it and stop talking about it. and digital and direct mail data, all scattered across an organization. Just get moving.” – Zach Christenson Crowdskout allows you to warehouse it all in one spot, combine