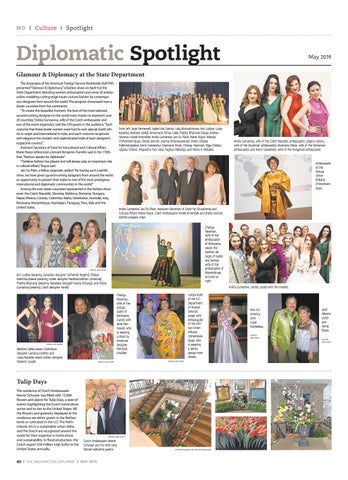 Glamour & Diplomacy at the State Department The Associates of the American Foreign Service Worldwide (AAFSW) presented “Glamour & Diplomacy,” a fashion show on April 9 at the State Department debuting women ambassadors and wives of ambassadors modeling cutting-edge haute couture fashion by contemporary designers from around the world. The program showcased over a dozen countries from five continents. “To create this beautiful moment, the best of the most talented, up-and-coming designers in the world were chosen to represent over 20 countries,” Indira Gumarova, wife of the Czech ambassador and one of the event organizers, told the 350 guests in the audience. “Each costume that these lovely women wore had its own special motif, ethnic in origin and international in style, and each costume recaptures with elegance the modern and sophisticated style of each designer’s respective country.” Assistant Secretary of State for Educational and Cultural Affairs Marie Royce referenced a remark Benjamin Franklin said in the 1700s that, “Fashion speaks for diplomats.” “I believe fashion has played and will always play an important role in cultural affairs,” Royce said. Jan Du Plain, a fellow organizer, added: “By having such a terrific show, we have given up-and-coming designers from around the world an opportunity to present their styles to one of the most prestigious international and diplomatic communities in the world,” Among the over dozen countries represented in the fashion show were: the Czech Republic, Slovenia, Moldova, Romania, Hungary, Nepal, Mexico, Canada, Colombia, Malta, Uzbekistan, Australia, Iraq, Botswana, Mozambique, Azerbaijan, Paraguay, Peru, Italy and the United States.

Indira Gumarova, center, poses with the models. Changu Newman, wife of the ambassador of Botswana, stands with Jane Pennewell, who is wearing a dress by American designer Monique Lhuillier.

Latoya Kyler of the D.C. Department of Human Services poses with Ambassador of the African Union Arikana ChihomboriQuao, who is wearing a Selma design from Ghana.

Tulip Days The residence of Dutch Ambassador Henne Schuwer was filled with 15,000 flowers and plants for Tulip Days, a slate of events highlighting the Dutch horticulture sector and its ties to the United States. All the flowers and greenery displayed at the residence are either grown in the Netherlands or cultivated in the U.S. The Netherlands sits in a sustainable urban delta, and the Dutch are recognized around the world for their expertise in horticulture and sustainability. In floral production, the Dutch export 450 million tulip bulbs to the United States annually.

PHOTOS: EMBASSY OF THE NETHERLANDS

The Washington Diplomat - May 2019

The Washington Diplomat - May 2019