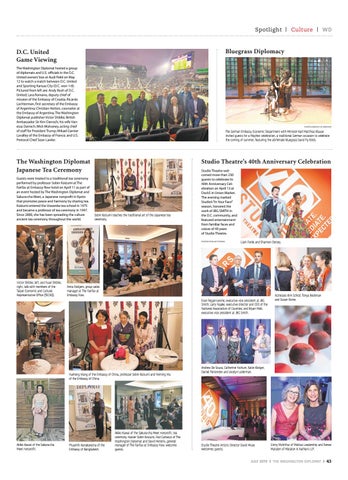 The Washington Diplomat Japanese Tea Ceremony Guests were treated to a traditional tea ceremony performed by professor Sobin Koizumi at The Fairfax at Embassy Row hotel on April 11 as part of an event hosted by The Washington Diplomat and Sakura-cha Meet, a Japanese nonprofit in Kyoto that promotes peace and harmony by sharing tea. Koizumi entered the Urasenke tea school in 1975 and became a professor of tea ceremony in 1997. Since 2000, she has been spreading the culture ancient tea ceremony throughout the world.

Studio Theatre welcomed more than 250 guests to celebrate its 40th Anniversary Celebration on April 13 at Dock5 in Union Market. The evening marked Studio’s “In Your Face” season, honored the work of JBG SMITH in the D.C. community, and featured entertainment from familiar faces and voices of 40 years of Studio Theatre. PHOTOS: PIXELME STUDIOS

The Washington Diplomat is an independent, monthly newspaper serving the Washington D.C. international and diplomatic community with regular columns and features focusing on international news and events. For more than a decade, each issue has in-depth ambassador interviews, a prominent Culture section with reviews on a wide range of cultural offerings. In addition, special sections are scheduled throughout the year, covering the latest developments in the medical, travel & hotels, real estate and education sectors just to name a few. 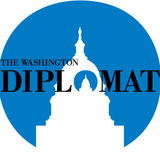