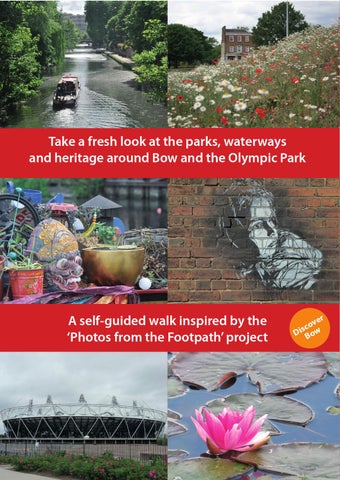 Take a fresh look at the parks, waterways and heritage around Bow and the Olympic Park

1 Set off from Mile End crossroads Our walk begins on top of the Green Bridge – a millennium project to carry Mile End Park high above the traffic. Here there’s a bird’s-eye view of High Street 2012, red-brick Guardian Angels, and the Gherkin beyond. There are spectacular skylines too from the top of the mound, created in the footprint of the New Globe Tavern pleasure gardens.

2 Stroll along the Regentâ&#x20AC;&#x2122;s Canal towpath Ducks and coots dabble in the water, beside the angular lock-keeperâ&#x20AC;&#x2122;s cottage and copper-clad halls on the Queen Mary campus. Moored narrow-boats are stacked high with signs of life, an echo of the laden barges that once ferried coal along here, on their arc around London. And on the towpath, joggers, cyclists and pedestrians navigate their journeys.

3 Weave your way through Mile End Park Itâ&#x20AC;&#x2122;s a feast for the senses in Mile End Park. Fragrant flowering shrubs curve around the art pavilion. Beyond the railway, rusty cut-outs of Sylvia Pankhurst and Ledley King lead towards the Palm Tree. Children go pond-dipping for bugs and beasties in the ecology park. And the open-air gym bounces with basketballs.

4 Wander by the lake and trees in Victoria Park Victoria Park beckons, newly spruced. Past Old Ford Lock, nip in through the Arcade Gate. Chinese dragons peer from the pagoda, and the glass-domed Pavilion CafĂŠ offers a lakeside snack. East of Grove Road, marble-barked London planes line your route. And beside the canal, Gunmakerâ&#x20AC;&#x2122;s Gate recalls the rifle works that once prospered here.

5 Cut along the Hertford Union Canal Sir George Duckett fathomed that a short-cut would help boats avoid the twists and tides of Bow Creek. His Hertford Union Canal was a commercial flop, but 180 years later we reap the real rewards. It’s a quiet backwater, just the ‘ting ting’ of cyclists, gardening chat at Growing Concerns, the honk of geese and the rush of water through the lock gates.

6 Dart over to explore Fish Island Cross the red-ring bridge and stroll through Fish Island. It’s not quite an island, but certainly fishy. The freshwater street names – Dace, Roach and Bream – hint at what swims in Bow’s back rivers beyond. This factory town was once busy with piano-makers and peanut-roasters. Now it’s an enclave of artists showcasing their work in the open-air street galleries.

7 Take a break at the Counter Café or Forman’s Coffee and carrot cake might tempt you into Stour Space, an arty base for the Counter Café. A few steps on – and prodded by the Olympics – Forman’s has leapt over the Lee to a salmon-pink smokehouse shaped like a darne. Try out the salmon, with blinis and rye bread, with a stadium backdrop.

Step out on this six-mile loop from Mile End. Itâ&#x20AC;&#x2122;s best to allow up to three hours, including time for coffee stops and sightseeing. Toilets are available in Victoria Park, as well as at cafĂŠs and pubs along the way. If you prefer to walk it in stages, the route passes Pudding Mill Lane (DLR), Bromley by Bow (District line), Bow Church (DLR) and Bow Road (District line) and bus services run along Bow Road.

8 Navigate the Lee and climb to the Greenway By Old Ford Lock, the ‘Big Breakfast’ house stands silent. But soon a fleet of Water Buses will shuttle here from Limehouse and Tottenham. On top of the Northern Outfall Sewer – Joseph Bazalgette’s giant pipeline, engineered to solve the ‘Great Stink’ of 1858 – the Greenway buzzes with tour groups and school kids, keen to survey the Olympic landscape.

9 Survey the Olympic skyline at the View Tube Straight as an arrow, the Greenway sprints to the View Tube – a community venture, with open-air gallery, gardens and bike hire. New Olympic structures dominate the skyline – the Stadium stands centre stage, beside the wave-topped Aquatics Centre and Anish Kapoor’s red Orbit, shooting skyward.

10 Wind along the back rivers to Three Mills On you flow with the inter-laced Bow back rivers, past Three Mills Green and the gothic outline of Abbey Mills. The timber-framed House Mill straddles the water, steeped in history. Book a tour, to glimpse where grain was ground and gin distilled. Itâ&#x20AC;&#x2122;s forwardlooking too, with plans to harness once again the fast-flowing tides.

11 Explore Bromley by Bow, new and old After a subway dash under the thunderous traffic, there’s calm at the Bromley by Bow Centre. A landmark in holistic healthcare, it’s dotted with sculptures, grow-your-own beds and arty goings on. On Bow Road, red-handed Gladstone guides you to St Mary’s parish church, another oasis, marooned on an island. Inside, a cat and mouse play in the stained glass.

12 Meet the locals as you follow Bow Road Westwards from the church, Bow Road is a vital highway, an arterial route. Tubes and buses commute along its length, and cyclists whizz by on blue lanes. Alongside the traffic, Bow people go about their daily lives â&#x20AC;&#x201C; walk with them, talk with them â&#x20AC;&#x201C; a multi-cultural mix, all making their homes here.

13 Peer up and down at the architectural mix Georgian terraces stand next to post-War estates. Pause for a pint perhaps, at the Bow Bells or Little Driver. Then look out for landmarks – the Dutch-gabled police station, a shipbuilder’s mansion at Tredegar House, Minnie Lansbury’s golden clock and, in the distance, the Italianate towers of the former St Clement’s Hospital, once the workhouse.

14 Walk amongst nature at the Cemetery Park In the Cemetery Park, teasel, celandines and goose-grass flourish amongst the monuments. And birdsong chirps from the wild woods. This Victorian necropolis was one of London’s ‘Magnificent Seven’ and the pathways are flanked with angels and anchors, urns and obelisks. It’s now a nature reserve – ask at the Soane Centre about their bat walks, conservation work, flora and fauna.

15 Reflect upon history in Tredegar Square Hop across Bow Road. The street names recall landowner Charles Morgan and philanthropist Prisca Coborn. Tredegar Square â&#x20AC;&#x201C; perhaps the grandest East End square â&#x20AC;&#x201C; is framed with decorative iron railings and speckled with coalhole covers. A Victorian pillar-box stands sentry in the corner. And leafy Rhonda Grove leads you back to Mile End, the end of your walk.

Bow has a rich and varied heritage. On the ‘Photos from the Footpath’ project, four groups of local residents set out – cameras in hand – to take a closer look at the neighbourhood. We share our story in this booklet and hope that it will inspire you to explore the parks, waterways and streets around Mile End, Bow and the Olympic Park. www.walkeast.org

When dashing about day to day, it’s easy to miss the many interesting sights close to home. On ‘Photos from the Footpath’, 45 local resident...

When dashing about day to day, it’s easy to miss the many interesting sights close to home. On ‘Photos from the Footpath’, 45 local resident...