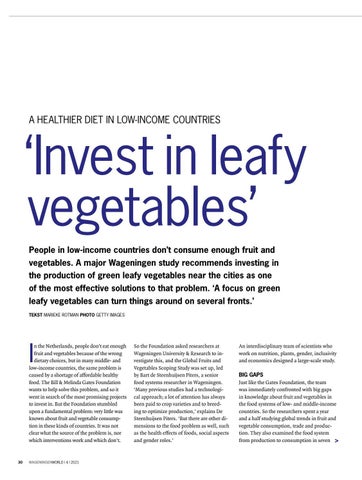 A HEALTHIER DIET IN LOW-INCOME COUNTRIES

n the Netherlands, people don’t eat enough fruit and vegetables because of the wrong dietary choices, but in many middle- and low-income countries, the same problem is caused by a shortage of affordable healthy food. The Bill &amp; Melinda Gates Foundation wants to help solve this problem, and so it went in search of the most promising projects to invest in. But the Foundation stumbled upon a fundamental problem: very little was known about fruit and vegetable consumption in these kinds of countries. It was not clear what the source of the problem is, nor which interventions work and which don’t.

So the Foundation asked researchers at Wageningen University &amp; Research to investigate this, and the Global Fruits and Vegetables Scoping Study was set up, led by Bart de Steenhuijsen Piters, a senior food systems researcher in Wageningen. ‘Many previous studies had a technological approach; a lot of attention has always been paid to crop varieties and to breeding to optimize production,’ explains De Steenhuijsen Piters. ‘But there are other dimensions to the food problem as well, such as the health effects of foods, social aspects and gender roles.’

An interdisciplinary team of scientists who work on nutrition, plants, gender, inclusivity and economics designed a large-scale study. BIG GAPS Just like the Gates Foundation, the team was immediately confronted with big gaps in knowledge about fruit and vegetables in the food systems of low- and middle-income countries. So the researchers spent a year and a half studying global trends in fruit and vegetable consumption, trade and production. They also examined the food system from production to consumption in seven &gt;