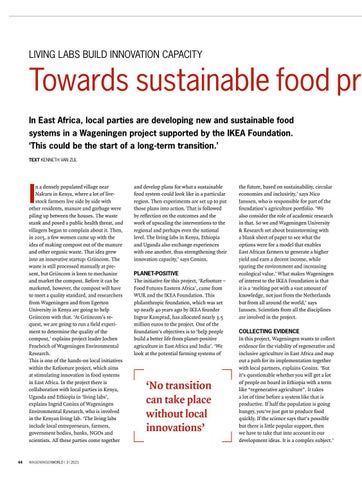 Towards sustainable food pr In East Africa, local parties are developing new and sustainable food systems in a Wageningen project supported by the IKEA Foundation. ‘This could be the start of a long-term transition.’ TEXT KENNETH VAN ZIJL

n a densely populated village near Nakuru in Kenya, where a lot of livestock farmers live side by side with other residents, manure and garbage were piling up between the houses. The waste stank and posed a public health threat, and villagers began to complain about it. Then, in 2015, a few women came up with the idea of making compost out of the manure and other organic waste. That idea grew into an innovative startup: Griincom. The waste is still processed manually at present, but Griincom is keen to mechanize and market the compost. Before it can be marketed, however, the compost will have to meet a quality standard, and researchers from Wageningen and from Egerton University in Kenya are going to help Griincom with that. ‘At Griincom’s request, we are going to run a field experiment to determine the quality of the compost,’ explains project leader Jochen Froebrich of Wageningen Environmental Research. This is one of the hands-on local initiatives within the Refooture project, which aims at stimulating innovation in food systems in East Africa. In the project there is collaboration with local parties in Kenya, Uganda and Ethiopia in ‘living labs’, explains Ingrid Coninx of Wageningen Environmental Research, who is involved in the Kenyan living lab. ‘The living labs include local entrepreneurs, farmers, government bodies, banks, NGOs and scientists. All these parties come together

and develop plans for what a sustainable food system could look like in a particular region. Then experiments are set up to put those plans into action. That is followed by reflection on the outcomes and the work of upscaling the interventions to the regional and perhaps even the national level. The living labs in Kenya, Ethiopia and Uganda also exchange experiences with one another, thus strengthening their innovation capacity,’ says Coninx. PLANET-POSITIVE The initiative for this project, ‘Refooture – Food Futures Eastern Africa’, came from WUR and the IKEA Foundation. This philanthropic foundation, which was set up nearly 40 years ago by IKEA founder Ingvar Kamprad, has allocated nearly 3.5 million euros to the project. One of the foundation’s objectives is to ‘help people build a better life from planet-positive agriculture in East Africa and India’. ‘We look at the potential farming systems of

‘No transition can take place without local innovations’

the future, based on sustainability, circular economies and inclusivity,’ says Nico Janssen, who is responsible for part of the foundation’s agriculture portfolio. ‘We also consider the role of academic research in that. So we and Wageningen University & Research set about brainstorming with a blank sheet of paper to see what the options were for a model that enables East African farmers to generate a higher yield and earn a decent income, while sparing the environment and increasing ecological value.’ What makes Wageningen of interest to the IKEA Foundation is that it is a ‘melting pot with a vast amount of knowledge, not just from the Netherlands but from all around the world,’ says Janssen. Scientists from all the disciplines are involved in the project. COLLECTING EVIDENCE In this project, Wageningen wants to collect evidence for the viability of regenerative and inclusive agriculture in East Africa and map out a path for its implementation together with local partners, explains Coninx. ‘But it’s questionable whether you will get a lot of people on board in Ethiopia with a term like “regenerative agriculture”. It takes a lot of time before a system like that is productive. If half the population is going hungry, you’ve just got to produce food quickly. If the science says that’s possible but there is little popular support, then we have to take that into account in our development ideas. It is a complex subject.’