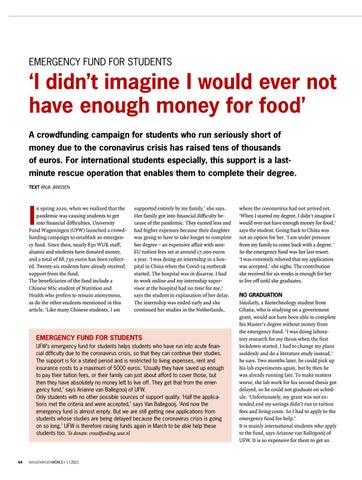 ‘I didn’t imagine I would ever not have enough money for food’ A crowdfunding campaign for students who run seriously short of money due to the coronavirus crisis has raised tens of thousands of euros. For international students especially, this support is a lastminute rescue operation that enables them to complete their degree. TEXT ANJA JANSSEN

n spring 2020, when we realized that the pandemic was causing students to get into financial difficulties, University Fund Wageningen (UFW) launched a crowdfunding campaign to establish an emergency fund. Since then, nearly 830 WUR staff, alumni and students have donated money, and a total of 68,730 euros has been collected. Twenty-six students have already received support from the fund. The beneficiaries of the fund include a Chinese MSc student of Nutrition and Health who prefers to remain anonymous, as do the other students mentioned in this article. ‘Like many Chinese students, I am

supported entirely by my family,’ she says. Her family got into financial difficulty because of the pandemic. They earned less and had higher expenses because their daughter was going to have to take longer to complete her degree – an expensive affair with nonEU tuition fees set at around 17,000 euros a year. ‘I was doing an internship in a hospital in China when the Covid-19 outbreak started. The hospital was in disarray. I had to work online and my internship supervisor at the hospital had no time for me,’ says the student in explanation of her delay. The internship was ended early and she ­continued her studies in the Netherlands,

EMERGENCY FUND FOR STUDENTS UFW’s emergency fund for students helps students who have run into acute financial difficulty due to the coronavirus crisis, so that they can continue their studies. The support is for a stated period and is restricted to living expenses, rent and insurance costs to a maximum of 5000 euros. ‘Usually they have saved up enough to pay their tuition fees, or their family can just about afford to cover those, but then they have absolutely no money left to live off. They get that from the emergency fund,’ says Arianne van Ballegooij of UFW. Only students with no other possible sources of support qualify. ‘Half the applications met the criteria and were accepted,’ says Van Ballegooij. ‘And now the ­emergency fund is almost empty. But we are still getting new applications from students whose studies are being delayed because the coronavirus crisis is going on so long.’ UFW is therefore raising funds again in March to be able help these students too. To donate: crowdfunding.wur.nl

where the coronavirus had not arrived yet. ‘When I started my degree, I didn’t imagine I would ever not have enough money for food,’ says the student. Going back to China was not an option for her. ‘I am under pressure from my family to come back with a degree.’ So the emergency fund was her last resort. ‘I was extremely relieved that my application was accepted,’ she sighs. The contribution she received for six weeks is enough for her to live off until she graduates. NO GRADUATION Similarly, a Biotechnology student from Ghana, who is studying on a government grant, would not have been able to complete his Master’s degree without money from the emergency fund. ‘I was doing laboratory research for my thesis when the first lockdown started. I had to change my plans suddenly and do a literature study instead,’ he says. Two months later, he could pick up his lab experiments again, but by then he was already running late. To make matters worse, the lab work for his second thesis got delayed, so he could not graduate on schedule. ‘Unfortunately, my grant was not extended and my savings didn’t run to tuition fees and living costs. So I had to apply to the emergency fund for help.’ It is mainly international students who apply to the fund, says Arianne van Ballegooij of UFW. It is so expensive for them to get an