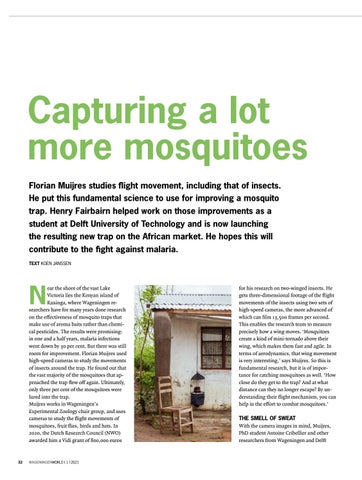 Capturing a lot more mosquitoes Florian Muijres studies flight movement, including that of insects. He put this fundamental science to use for improving a mosquito trap. Henry Fairbairn helped work on those improvements as a student at Delft University of Technology and is now launching the resulting new trap on the African market. He hopes this will contribute to the fight against malaria. TEXT KOEN JANSSEN

ear the shore of the vast Lake Victoria lies the Kenyan island of Rusinga, where Wageningen researchers have for many years done research on the effectiveness of mosquito traps that make use of aroma baits rather than chemical pesticides. The results were promising: in one and a half years, malaria infections went down by 30 per cent. But there was still room for improvement. Florian Muijres used high-speed cameras to study the movements of insects around the trap. He found out that the vast majority of the mosquitoes that approached the trap flew off again. Ultimately, only three per cent of the mosquitoes were lured into the trap. Muijres works in Wageningen’s Experimental Zoology chair group, and uses cameras to study the flight movements of mosquitoes, fruit flies, birds and bats. In 2020, the Dutch Research Council (NWO) awarded him a Vidi grant of 800,000 euros

for his research on two-winged insects. He gets three-dimensional footage of the flight movements of the insects using two sets of high-speed cameras, the more advanced of which can film 13,500 frames per second. This enables the research team to measure precisely how a wing moves. ‘Mosquitoes create a kind of mini-tornado above their wing, which makes them fast and agile. In terms of aerodynamics, that wing movement is very interesting,’ says Muijres. So this is fundamental research, but it is of importance for catching mosquitoes as well. ‘How close do they get to the trap? And at what distance can they no longer escape? By understanding their flight mechanism, you can help in the effort to combat mosquitoes.’ THE SMELL OF SWEAT With the camera images in mind, Muijres, PhD student Antoine Cribellier and other researchers from Wageningen and Delft