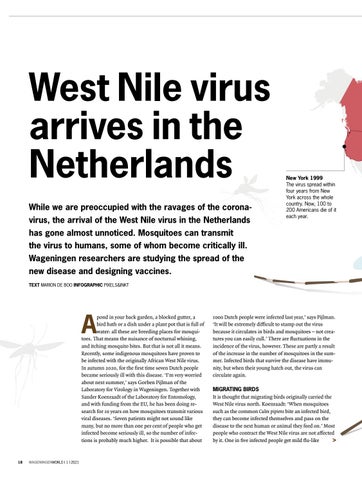 New York 1999 The virus spread within four years from New York across the whole country. Now, 100 to 200 Americans die of it each year.

has gone almost unnoticed. Mosquitoes can transmit the virus to humans, some of whom become critically ill. Wageningen researchers are studying the spread of the new disease and designing vaccines. TEXT MARION DE BOO INFOGRAPHIC PIXELS&amp;INKT

pond in your back garden, a blocked gutter, a bird bath or a dish under a plant pot that is full of water: all these are breeding places for mosquitoes. That means the nuisance of nocturnal whining, and itching mosquito bites. But that is not all it means. Recently, some indigenous mosquitoes have proven to be infected with the originally African West Nile virus. In autumn 2020, for the first time seven Dutch people became seriously ill with this disease. ‘I’m very worried about next summer,’ says Gorben Pijlman of the Laboratory for Virology in Wageningen. Together with Sander Koenraadt of the Laboratory for Entomology, and with funding from the EU, he has been doing research for 10 years on how mosquitoes transmit various viral diseases. ‘Seven patients might not sound like many, but no more than one per cent of people who get infected become seriously ill, so the number of infections is probably much higher. It is possible that about

1000 Dutch people were infected last year,’ says Pijlman. ‘It will be extremely difficult to stamp out the virus because it circulates in birds and mosquitoes – not creatures you can easily cull.’ There are fluctuations in the incidence of the virus, however. These are partly a result of the increase in the number of mosquitoes in the summer. Infected birds that survive the disease have immunity, but when their young hatch out, the virus can circulate again. MIGRATING BIRDS It is thought that migrating birds originally carried the West Nile virus north. Koenraadt: ‘When mosquitoes such as the common Culex pipiens bite an infected bird, they can become infected themselves and pass on the disease to the next human or animal they feed on.’ Most people who contract the West Nile virus are not affected &gt; by it. One in five infected people get mild flu-like

Wageningen World is the quarterly magazine for associates and alumni of Wageningen UR (University & Research centre) and members of KLV , the Wageningen Alumni Network.