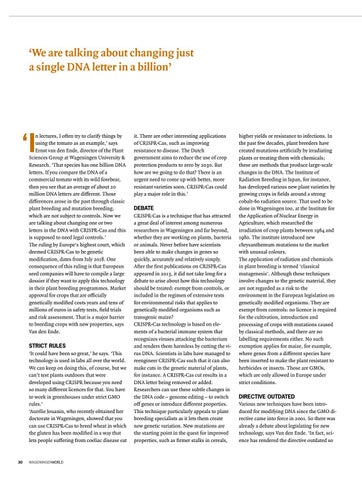 n lectures, I often try to clarify things by using the tomato as an example,’ says Ernst van den Ende, director of the Plant Sciences Group at Wageningen University &amp; Research. ‘That species has one billion DNA letters. If you compare the DNA of a commercial tomato with its wild forebear, then you see that an average of about 20 million DNA letters are different. Those differences arose in the past through classic plant breeding and mutation breeding, which are not subject to controls. Now we are talking about changing one or two letters in the DNA with CRISPR-Cas and this is supposed to need legal controls.’ The ruling by Europe’s highest court, which deemed CRISPR-Cas to be genetic modification, dates from July 2018. One consequence of this ruling is that European seed companies will have to compile a large dossier if they want to apply this technology in their plant breeding programmes. Market approval for crops that are officially genetically modified costs years and tens of millions of euros in safety tests, field trials and risk assessment. That is a major barrier to breeding crops with new properties, says Van den Ende. STRICT RULES ‘It could have been so great,’ he says. ‘This technology is used in labs all over the world. We can keep on doing this, of course, but we can’t test plants outdoors that were developed using CRISPR because you need so many different licences for that. You have to work in greenhouses under strict GMO rules.’ ‘Aurélie Jouanin, who recently obtained her doctorate in Wageningen, showed that you can use CRISPR-Cas to breed wheat in which the gluten has been modified in a way that lets people suffering from coeliac disease eat

it. There are other interesting applications of CRISPR-Cas, such as improving resistance to disease. The Dutch government aims to reduce the use of crop protection products to zero by 2030. But how are we going to do that? There is an urgent need to come up with better, more resistant varieties soon. CRISPR-Cas could play a major role in this.’ DEBATE CRISPR-Cas is a technique that has attracted a great deal of interest among numerous researchers in Wageningen and far beyond, whether they are working on plants, bacteria or animals. Never before have scientists been able to make changes in genes so quickly, accurately and relatively simply. After the first publications on CRISPR-Cas appeared in 2013, it did not take long for a debate to arise about how this technology should be treated: exempt from controls, or included in the regimen of extensive tests for environmental risks that applies to genetically modified organisms such as transgenic maize? CRISPR-Cas technology is based on elements of a bacterial immune system that recognizes viruses attacking the bacterium and renders them harmless by cutting the virus DNA. Scientists in labs have managed to reengineer CRISPR-Cas such that it can also make cuts in the genetic material of plants, for instance. A CRISPR-Cas cut results in a DNA letter being removed or added. Researchers can use these subtle changes in the DNA code – genome editing – to switch off genes or introduce different properties. This technique particularly appeals to plant breeding specialists as it lets them create new genetic variation. New mutations are the starting point in the quest for improved properties, such as firmer stalks in cereals,

higher yields or resistance to infections. In the past few decades, plant breeders have created mutations artificially by irradiating plants or treating them with chemicals; these are methods that produce large-scale changes in the DNA. The Institute of Radiation Breeding in Japan, for instance, has developed various new plant varieties by growing crops in fields around a strong cobalt-60 radiation source. That used to be done in Wageningen too, at the Institute for the Application of Nuclear Energy in Agriculture, which researched the irradiation of crop plants between 1964 and 1980. The institute introduced new chrysanthemum mutations to the market with unusual colours. The application of radiation and chemicals in plant breeding is termed ‘classical mutagenesis’. Although these techniques involve changes to the genetic material, they are not regarded as a risk to the environment in the European legislation on genetically modified organisms. They are exempt from controls: no licence is required for the cultivation, introduction and processing of crops with mutations caused by classical methods, and there are no labelling requirements either. No such exemption applies for maize, for example, where genes from a different species have been inserted to make the plant resistant to herbicides or insects. Those are GMOs, which are only allowed in Europe under strict conditions. DIRECTIVE OUTDATED Various new techniques have been introduced for modifying DNA since the GMO directive came into force in 2001. So there was already a debate about legislating for new technology, says Van den Ende. ‘In fact, science has rendered the directive outdated so

Wageningen World is the quarterly magazine for associates and alumni of Wageningen UR (University & Research centre) and members of KLV , the Wageningen Alumni Network.