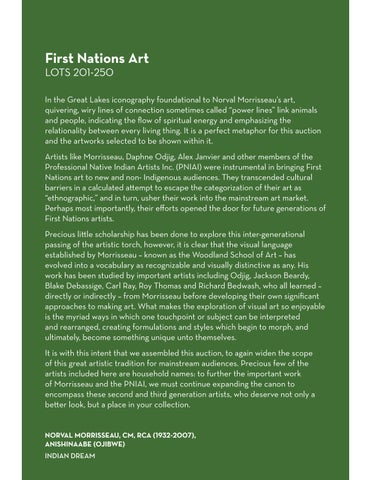 In the Great Lakes iconography foundational to Norval Morrisseau’s art, quivering, wiry lines of connection sometimes called “power lines” link animals and people, indicating the flow of spiritual energy and emphasizing the relationality between every living thing. It is a perfect metaphor for this auction and the artworks selected to be shown within it. Artists like Morrisseau, Daphne Odjig, Alex Janvier and other members of the Professional Native Indian Artists Inc. (PNIAI) were instrumental in bringing First Nations art to new and non- Indigenous audiences. They transcended cultural barriers in a calculated attempt to escape the categorization of their art as “ethnographic,” and in turn, usher their work into the mainstream art market. Perhaps most importantly, their efforts opened the door for future generations of First Nations artists. Precious little scholarship has been done to explore this inter-generational passing of the artistic torch, however, it is clear that the visual language established by Morrisseau – known as the Woodland School of Art – has evolved into a vocabulary as recognizable and visually distinctive as any. His work has been studied by important artists including Odjig, Jackson Beardy, Blake Debassige, Carl Ray, Roy Thomas and Richard Bedwash, who all learned – directly or indirectly – from Morrisseau before developing their own significant approaches to making art. What makes the exploration of visual art so enjoyable is the myriad ways in which one touchpoint or subject can be interpreted and rearranged, creating formulations and styles which begin to morph, and ultimately, become something unique unto themselves. It is with this intent that we assembled this auction, to again widen the scope of this great artistic tradition for mainstream audiences. Precious few of the artists included here are household names: to further the important work of Morrisseau and the PNIAI, we must continue expanding the canon to encompass these second and third generation artists, who deserve not only a better look, but a place in your collection. NORVAL MORRISSEAU, CM, RCA (1932-2007), ANISHINAABE (OJIBWE) INDIAN DREAM

The Fall 2022 Canada Auction series again brings together the best of Canadian, First Nations and Inuit art, alongside objects from Canadian culture and history. 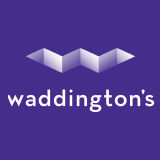