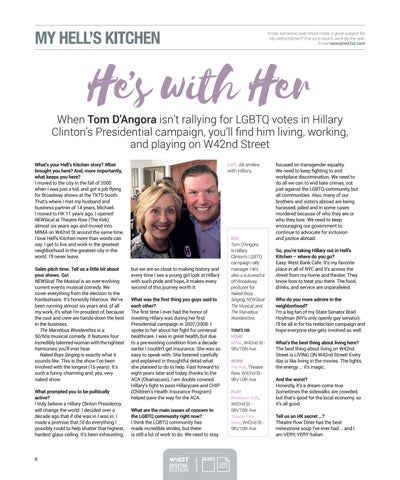 Know someone cool who’d make a great subject for My Hell’s Kitchen? Put us in touch, we’ll do the rest. Email news@w42st.com

When Tom D’Angora isn’t rallying for LGBTQ votes in Hillary Clinton’s Presidential campaign, you’ll find him living, working, and playing on W42nd Street What’s your Hell’s Kitchen story? What brought you here? And, more importantly, what keeps you here? I moved to the city in the fall of 2000 when I was just a kid, and got a job flying for Broadway shows at the TKTS booth. That’s where I met my husband and business partner of 14 years, Michael. I moved to HK 11 years ago. I opened NEWSical at Theatre Row (The Kirk) almost six years ago and moved into MIMA on W42nd St around the same time. I love Hell’s Kitchen more than words can say. I get to live and work in the greatest neighborhood in the greatest city in the world. I’ll never leave. Sales pitch time. Tell us a little bit about your shows. Go! NEWSical The Musical is an ever-evolving current events musical comedy. We cover everything from the election to the Kardashians. It’s honestly hilarious. We’ve been running almost six years and, of all my work, it’s what I’m proudest of, because the cast and crew are hands-down the best in the business. The Marvelous Wonderettes is a 50/60s musical comedy. It features four incredibly talented woman with the tightest harmonies you’ll ever hear. Naked Boys Singing is exactly what it sounds like. This is the show I’ve been involved with the longest (15 years). It’s such a funny, charming and, yes, very naked show. What prompted you to be politically active? I truly believe a Hillary Clinton Presidency will change the world. I decided over a decade ago that if she was in I was in. I made a promise that I’d do everything I possibly could to help shatter that highest, hardest glass ceiling. It’s been exhausting,

Left: All smiles with Hillary.

but we are so close to making history and every time I see a young girl look at Hillary with such pride and hope, it makes every second of this journey worth it. What was the first thing you guys said to each other? The first time I ever had the honor of meeting Hillary was during her first Presidential campaign in 2007/2008. I spoke to her about her fight for universal healthcare. I was in great health, but due to a pre-existing condition from a decade earlier I couldn’t get insurance. She was so easy to speak with. She listened carefully and explained in thoughtful detail what she planned to do to help. Fast forward to eight years later and today, thanks to the ACA (Obamacare), I am double covered. Hillary’s fight to pass Hillarycare and CHIP (Children’s Health Insurance Program) helped pave the way for the ACA. What are the main issues of concern to the LGBTQ community right now? I think the LGBTQ community has made incredible strides, but there is still a lot of work to do. We need to stay

focused on transgender equality. We need to keep fighting to end workplace discrimination. We need to do all we can to end hate crimes, not just against the LGBTQ community, but all communities. Also, many of our brothers and sisters abroad are being harassed, jailed and in some cases murdered because of who they are or who they love. We need to keep encouraging our government to continue to advocate for inclusion and justice abroad. So, you’re taking Hillary out in Hell’s Kitchen – where do you go? Easy: West Bank Cafe. It’s my favorite place in all of NYC and it’s across the street from my home and theater. They know how to treat you there. The food, drinks, and service are unparalleled. Who do you more admire in the neighborhood? I’m a big fan of my State Senator Brad Hoylman (NY’s only openly gay senator). I’ll be all in for his reelection campaign and hope everyone else gets involved as well. What’s the best thing about living here? The best thing about living on W42nd Street is LIVING ON W42nd Street! Every day is like living in the movies. The lights, the energy ... it’s magic. And the worst? Honestly, it’s a dream come true. Sometimes the sidewalks are crowded, but that’s good for the local economy, so it’s all good. Tell us an HK secret …? Theatre Row Diner has the best minestrone soup I’ve ever had … and I am VERY, VERY Italian.