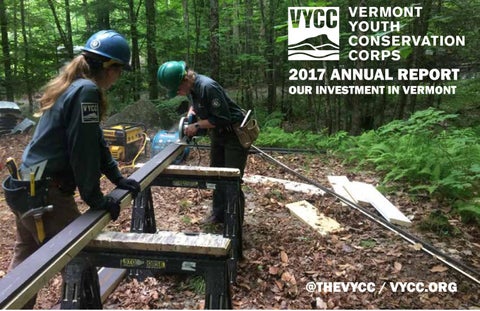 2017 ANNUAL REPORT OUR INVESTMENT IN VERMONT

Mission & Values Vermont Youth Conservation Corps (VYCC) is a conservation organization that teaches young people personal responsibility through meaningful work that connects us to the land, community, and each other. Each year we: • Welcome 300 new and returning Corps Members to our growing family of 6,500+ alumni; • Pay 15-24 year olds to complete conservation and agricultural projects throughout Vermont; • Teach essential workforce readiness skills; and • Instill the values of personal responsibility, service, leadership, appreciation for diverse backgrounds, hard work, and a reverence for the natural world.

Corps Member Voices "You start by serving your community and end with giving so much more to yourself through the work and the friends and the confidence you gain.” – Maddie Shropshire (Quechee,VT), 2017 AmeriCorps Member, Conservation Spike Crew & new Crew Leader in 2018

Ben, showing off a County Fair worthy sunflower on the Farm at VYCC

As we made the rounds [of Health Care Share deliveries],

I was filled with a sense of satisfaction.

It’s one thing to grow vegetables and care for the animals, but it’s another to see where they go and imagine the bellies they feed. It feels good to know that our food makes it into your houses every week.” Maddie (left) and Victoria Best, rebuilding a public pavillion at a Vermont State Parks' worksite

A Word From Our Leadership Dear Friends, Thank you reading this report on VYCC’s impact here in Vermont. In the pages that follow, we share stories that convey the vitality of our work, the communities we touch, and the lives we change.VYCC exemplifies the best of the Youth Corps spirit by: • investing in young Vermonters and fostering deep appreciation for personal responsibility and service; • protecting and restoring public and working lands that expand beyond trails and into parks, waterways, farms, community gardens and other public spaces that we all love and use; and • strengthening our economy through 300 paying positions for talented young people who care deeply about their communities…and helping them to put down roots here in the Green Mountain State! Service, community, and enduring relationships are central to our mission and thus, our success.Together, with your support, we will continue to make VYCC inclusive and accessible to all, innovative and adaptive in programming, and a touchstone experience for today’s youth and tomorrow’s leaders. We invite you to visit a VYCC crew this year.Witnessing and hearing Corps Members’ efforts will buoy your spirits and give you hope for our future.A visit with a crew will be a highlight of your season–we guarantee it. Please call us to arrange one, (802) 434-3969 ext. 110. Thank you, and let’s make the VYCC experience possible for all Vermont youth. In gratitude,

Statewide Impact: By The Numbers

A VYCC Corps Member taking in the mist of Owls Head Town Forest in Dorset.

Our Conservation Program is built upon nearly 35 years of a deep connection to Vermont’s public lands. Inspired by the historic Civilian Conservation Corps (CCC), we partner with young people who gain: • Hands on skills in: carpentry, trail building, waterway restoration and more. • Unique crew life experience on: a traditional Spike Crew, working on site and camping or on a 2017 Community Crew, working on site, while living at home in their own communities of Brattleboro, Burlington, S. Burlington, Williston, St. Albans, Woodstock, and Barre. • A community of peers: like our American Sign Language (ASL) (for Deaf and Hard-of-Hearing Corps Members), Female Leadership Development, and longer term AmeriCorps Member crews. Photo: 2017 Conservation Crew Leaders on an ADA-accessible trail bridge they built on Camel's Hump

Our Food and Farm Program centers around our Health Care Share Program. VYCC crews grow and distribute organic produce to Vermonters in need through their health providers. We are proud of our strong partnership with the Corporation for National and Community Service, SerVermont, and Vermont medical centers. Guided by AmeriCorps Team and Project Leaders, Corps Members work and serve throughout the year by: • Teaching and learning agriculture skills on our beauitful Richmond campus and on partner farms in Orleans and Washington counties; • Practicing and improving personal nutrition and finance; • Exploring Vermont food systems through Venture Semester, a residential GAP year program; and • Taking personal responsibility for their actions.

That's how many pounds of food the Newport Farm Community Crew grew!

“I’ve always been very passionate about the connection between food and community, as well as food and education, so

the fact that we are also providing them with education is super important to me.”

In 2017, Food and Farm crews worked and learned on 14 farms in Vermont, including our-ten acre home farm in Richmond. At VYCC's northern most project location, a crew of local Newport youth worked on the Bluffside Farm, a Vermont Land Trust owned property. They grew produce that helped to feed patient families through our Health Care Share (HCS) partnership with North Country Hospital.

In total, this crew of nine grew produce for 66 Vermont families in need.

"Hosting the Health Care Share garden and crew at Bluffside Farm has been a great development that is right in line with community priorities for the property in terms of agriculture, health and education.

We are thrilled to be partnering with VYCC, North Country Hospital, and area youth to make this happen." â&#x20AC;&#x201C;Tracy Zschau, Conservation Director,Vermont Land Trust

That's how many hours this Conservation Crew put in the field.

"My VYCC experience has led me to pursue further education in the trades because of the sense of pride I got from working with my hands. Further, I have a new respect and understanding of the role nature plays in the lives of humans.” –Erika Akerson (Worcester, MA), 2017 AmeriCorps Member, Conservation Spike Crew

Erika prepping a felled tree for trail work on the AT

In 2017, Conservation crews were in every corner of the state, completing projects in many communities large, small, near, and far. A small sampling of projects included: • eight weeks of deep forest trail work on the Long Trail (LT) and Appalachian Trail (AT) in southern Vermont; • building a new mountain bike trail in Dorset and planting dozens of trees in Addison County; and • repairing trails and roads from erosion and phosphorus run-off in Bolton and Essex. Corps Members are proud preserve the LT and AT legacies and making lasting impact in communities connected by this historic network!

â&#x20AC;&#x153;[The crew] did a great job and accomplished high-quality work beyond my expectations. As always, I am proud to be partnered with such an exceptional organization that continues to accomplish great work with a lot of positive energy.

I see a lot of future leaders coming out of the VYCC!" â&#x20AC;&#x201C;Seth Coffey, Recreation Technician, Green Mountain National Forest

Photo: AC #4 building a stone staircase for generations to come

joining the VYCC, I have gained so many leadership skills

and so much knowledge about the world around me. My greatest accomplishment was building culverts and doing the decking [of a bridge] by myself! Now, when I go hiking, I pay attention to water drainage and how water comes off the trail.” –Eva Kamman (Vergennes,VT), 2017 Corps Member, Conservation Burlington Community Crew Eva using a rockbar to move a 500 pound rock into place

That's how many feet of trail this crew resurfaced!

partnership with VYCC is helping us achieve our conservation goals.

Not only are we building high-quality trail projects, but we are also increasing our capacity to engage youth of Burlington in a deep and meaningful way. I’m very excited about the short and long-term benefits of our partnership.” -Dan Cahill, Land Steward, Burlington Parks, Recreation and Waterfront

â&#x20AC;&#x153;It is fulfilling to know that we have the ingenuity, persistence, and can-do relationships that have resulted in introducing youth from a variety of backgrounds to their public lands, careers in natural resource management, and environmental stewardship ethics. This recognition for the VYCC American Sign Language (ASL) Spike Crew means so much!â&#x20AC;? -Holly Knox, Recreation Program Manager for the Green Mountain National Forest

Health Care Share Recognized As Project of the Year

â&#x20AC;&#x153;The Health Care Share program represents everything we look for in a successful Corps project. This program provides a tangible benefit to the community and creates opportunities for young adults to learn and develop valuable skills. While several of our more than 130 member Corps across the country operate outstanding farm programs, this is one of the largest and is the only program that incorporates strong partnerships with the health care community. We applaud VYCC for their innovation and leadership in this field.â&#x20AC;? -Mary Ellen Sprenkel, President & CEO of The Corps Network

We are proud members of:

Estate Planning to VYCC Making a legacy gift to VYCC is something I feel strongly about. It is my way of supporting VYCC’s continued ability to benefit Vermont’s youth. Its programs give young people the confidence and leadership skills they need to become responsible adults while, as hard-working crew members, they learn about conserving our fragile natural environment. Having been involved with and inspired by VYCC for many years, I know that it is worth investing in for the long term. That’s why I have included it in my estate plans.” -Caroline Wadhams Bennett (Underhill), VYCC Sustaining Donor

Thank you for making a gift today!

Who Gives to VYCC? Our success and financial strength are made possible by these generous individuals and businesses.

Gifts in Tribute A meaningful way to honor, celebrate, or remember. A personal acknowledgment is sent to the individual or family you specify. Gift amounts remain confidential. Contributions were made in honor or memory of the individuals listed in bold by donors listed below them in italics. 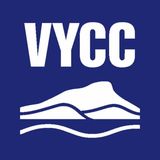 An inside look at how we invest in the future of Vermont through young people and with communities.

An inside look at how we invest in the future of Vermont through young people and with communities.