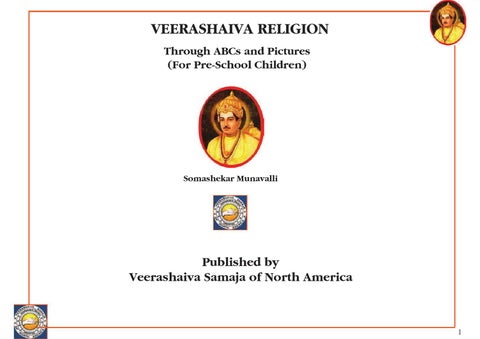 VEERASHAIVA RELIGION Through ABCs and Pictures (For Pre-School Children)

During the 2006 VSNA Boot Camp, the Detroit chapter – the hosts of the 2007 Annual Convention - promised that the forth coming convention would provide a refreshingly unique religious experience for the participants. In keeping with the above pledge, we are pleased to present the participants the book titled “Veerashaiva Religion Through ABC’s and Pictures”. This book is intended for use in imparting religious education to 3 ~ 6 year old preschool Veerashaiva children. It uses pictures and caricatures to introduce our religion and our way of life in simple terms. The publication of this book, as a special offering of the 2007- annual convention, has been made possible by the gracious financial support provided by Dr. Shiva Prakash and Mrs. Suman Prakash, Bel Air (MD). On behalf of the VSNA members, I thank them for their kind and generous help. I would like thank Mr. Sateesh & Mamtha Kavi- for the art-work. Their artistic talent has made the presentation certainly more attractive to our children. I would also like to thank Dr. S. Munavalli for coming up with the concept and writing the book.

When the Detroit chapter of the VSNA announced that it would host the 2007VSNA Annual Convention, it also pledged itself to endeavor to provide an innovative experience to the participants. During the 2006-VSNA Boot Camp, a loud and clear demand for religious education, exposure and experience was made not only by the attendees but also by the tele-conference participants. In answer to this demand, the VSNA is pleased to present the book “Veerashaiva Religion Through ABC’s and Pictures”. The book has been designed to help the Veerashaiva children, aged, 3~6 years, pre-schoolers, who are born and/ or growing up in the North American subcontinent. It attempts to teach our religion and our way of life through simple style and language – pictures and caricatures and there by help young parents in their quest for ways to impart religious education and create religious awareness among their off-springs. I would like to thank three persons who have made this possible. First of all, VSNA-the members owe their thanks to Dr.. Shiva Prakash and Mrs. Suman Prakash, Bel Air (MD) for their generous financial assistance to publish the book. Secondly, I would like acknowledge the effort, time and trouble that our convention chairperson, Mr. G. S. Doddamani, has taken in coordinating its publication. Lastly, I also would like to express our thanks to Dr. S. Munavalli for coming up with the idea and scripting the book.

A Word • Since the founding of the VSNA, the members-at-large have been asking for guidance to help them in exposing small children, aged 3 ~ 6 years, to the Veerashaiva religion and the way of life. The same demand has been voiced several times in the newsletter published by the VSNA. • The book “Veerashaiava Religion Through ABD’c and Pictures” attempts to provide some help on this score. This book was written more than five years ago and the manuscript had remainined in the filing cabinet. If it were not for Dr. and Mrs. Shiva Prakash, Bel Air (MD) it would have remained their. I would like to thank them for providing the financial support to cover the cost of its publication. • I would like to acknowledge and thank Mr. G. S. Doddamani, Chairman, 2007-VSNA Annual Convention, for the encouragement and the effort he has put in to get this book in the hands of the members of the VSNA. Somashekar Munavalli 700 Paige Circle Bel Air, MD 21014

•Allama Prabhu is a Shivayogi of the Highest Order. •Anubhava Mantapa is the meeting place for Religious Discourses. •Asthavarna is one of the Cardinal Principles of the Veerashaiva Religion.

•Basava is the Heart and Soul of the Veerashaiva Religion. •Bhakti means Loving Submission to Lord Shiva. •Bhasma suggests Purity of Body, Mind and Soul.

â&#x20AC;˘Channabasava was a Pure Philosopher and Thinker. â&#x20AC;˘Compassion demonstrates Kindness, Love and Sharing.

â&#x20AC;˘Dashoha means Caring, Kindness and Sharing with Others. â&#x20AC;˘Devotion is Religious Zeal or Ardent Submission to Lord Shiva.

â&#x20AC;˘Egalitarianism Implies Providing Equal Opportunities to Every One. â&#x20AC;˘Equality means Treating Everyone with the Same Respect.

•God is the Creator of the World and the Living Beings. •Guru is a Teacher. •Guheshvar is another name for Shiva and is the Isthadeva of Allama Prabhu.

â&#x20AC;˘Humility means being Humble and Modest and not acting Selfishly and Egoistically.

â&#x20AC;˘Ishvar is another name Lord Shiva. â&#x20AC;˘Isthalinga is the Personal God that all Veerashaivas are Expected to wear on their Body.

Japa is the Reciting of the Holy Mantra or Prayer

•Linga stands for Lord Shiva. •Sthavaralinga means the Linga in the Temples. •Lingadiksha is the Religious Initiation Ceremony during which the Guru gives the Isthalinga to the Disciple. •Lingaiyka means the Union with Lord Shiva.

•Prasad is the Holy Food Blessed by God or Guru to be shared with Others. •Prayer is a Reverent Petition to God. Simply stated worship of God.

Qualification in a Sense means Limitation or Restriction. Our religion states that God is Free from any Qualification or limitation.

•Religion is a Way of Living which Expresses a Strong Belief and Commitment to God. •Rite is the Prescribed Form of Conducting Religious Ceremony. •Ritual means a Ceremonial Act.

•Shiva is the God worshipped by the Veerashaivas. •Shivayoga is the Yoga of Worshipping Isthalinga held in the Palm by Steadfastly and Continuously Gazing at it with a Rapt Attention. •Shunya means everything and nothing. It also means God. •Swamiji is a Holy Person who Conducts Religious Discourses.

Truth means Conforming to Facts. It also means Honesty, Integrity and Sincerity. It is a Virtue.

â&#x20AC;˘Urilinga Peddi became a Veerashaiva Saint by Telling the Truth and by Hard Dedicated Work. â&#x20AC;˘ Ulavi is about 75 kms from Karwar is the famous pilgrimage center for Veerashaivas. Here lies the Samadhi (final resting-place) of Channabasavanna

Vachana is Pithy Saying Written in a Simple Style. Veerashaiva is the Worshipper of Isthalinga, which represents Lord Shiva.

Worship means a reverent love and allegiance to God.

by Mediation and worship.

Zero literally means Nil. However, it can be considered as Synonymous with Shunya in Religious Parlor. 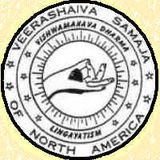