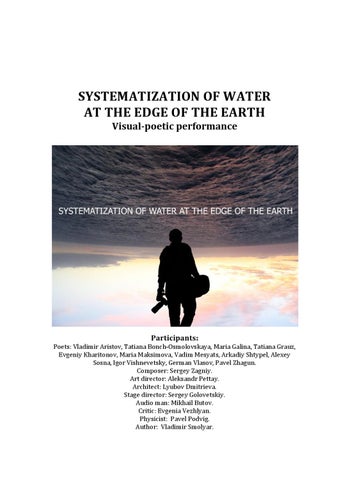 Description of the performance: Part 1 (20 min.) Twelve poets read their texts to the accompaniment of water waves against a background of animated photos of sea views (each poem consists of three stanzas; the topic of the poems: water, its features, the edge of the earth, etc.; each poem is associated to one of the photos). Photos by Tatiana Bonch-Osmolovskaya (Tasmania, December 2008-January 2009).

The opening of the performance took place at May 15th, 2009, in Zveryev centre for contemporary arts, Moscow

Examples of the photos by Tatiana Bonch-Osmolovskaya

The poets read stanzas by turn, “garlanding” by one stanza: at each joint, a poet N and a poet (N+1) read the last line of poet N’s stanza and the first line of poets (N+1)’s stanza together.

A fragment of stanzas’ connecting by Tatiana Bonch-Osmolovskaya

A hundred years ago, it would be called a mystère in the language of Russian modernism. Thirty years ago, it would be called a performance in the language of conceptualism. In fact, the uniqueness of this action is its double directions. It catches the space by the word, and then thickens it to the consistency of musical sound. So it involves into itself not only the participants but also the audience. And this synthesis of arts, as in the times of Blok and Beliy, has a theurgical power: a conventional «here and now» of the action – a desert seashore where the waves break – becomes a reality, while everything that we have seen and felt before becomes a fiction. And the world changes. It must change. But if the author would confine to this, we would not talk about the systematization of the water at the edge of the earth as a fact of contemporary art. Here, a modern content is put into wicked post-modern cover. Poets invited to become participants of the action, give their words as parents give their children to play in a movie. The words of poets are their “role”. As if they are waves that are intertwined, splashed and turn into noise, then once again find themselves out and return to their authors. Visual and sound content seems to mark poetry by quotes to teach it a lesson of humility and to turn it to one of the elements of the overall construction. But these elements too are just building material for the performance, in which the poet plays a poet, the artist plays an artist, and the musician plays a musician. The destiny of art in the modern world and its metaphysical justification is a real meta-subject of the performance. So, we are on the ocean shore. But the paradox is that in fact we are not there. Because the shore is empty. No one comes there to look at it. And then, from this emptiness the first Word appears... Its appearance immediately makes the situation cutting uncomfortable that demonstrates a real authenticity of what is happening. The poets translate their own words to the others and with an effort fit their own voices to somebody else's speeches. Human oration dissolves in the noise of time and murmur of waves, in the chaos, but still remains a word by which the chaos is comprehended and systematized. Tasmanian turnover, or the edge of the earth, suddenly becomes another edge of the being – it becomes a grey snow and long bell sound. Somewhere between them, the life is hidden, trying to speak. A man swims out of the mother’s waters, lets a sharp air to find the way to his lungs, steps on to the ground and goes farther and farther, to the edge of the earth, to meet the infinite water again and stand still. Sleek and wild, rough and shining, water goes out of the banks. A fog over the surf, ice plains, snowflakes falling from low clouds, and we who looks at the water listing its names.

The fourth phase of life is you, an element of emotion, you chirp and sparkle, chat and shine, plunking strings of music, over the crushing, and the only flush

comes from your own snakelike and egg-shaped womb which is not coiled as a worm, but as a brightly coloured sail, so, flinging off the thunder with the first gust

and emptying lepidopterous and sun-eyed heat: there they swim, so light, they flutter out as if from the grave, from waves and steam, - in spite of thunderâ&#x20AC;&#x2122;s might.

By early morning the stained-glass windows are fading And the ceiling rotates as if it canâ&#x20AC;&#x2122;t keep itself From the rusty throne a goanna comes out of hiding But smelling the wind disappears by the shelves.

Those of good mind have long since galloped off Silver has streamed away from the sails to the sky When the Queen of Dreams expands ledges of rocks And blue blood gushes into your eyes.

The higher in the mountains, the higher the wall of the ocean A glance cannot cross over it In the cities at the bottom everybody lives at the foots of this blue wall â&#x20AC;&#x201C; In the crater we live of foam edges

Shadow of a hat-jellyfish or a wave overshadowing us? Whether in the black Yalta of Chekhov you lie as a beggar on white plates in the bays where the waves of the black Yayla go down To lie at the foots of the mountain resting frozen by its blue glance of the wall

Shadow and mountains would not save everyone from the flood You will have time to jump into the space ark But he will be the last staying on the white square of cities Following with a charmed glare as a semitransparent shadow of her hat, and ribbons on foam white edges go a wave stopped by her chilling love a wave reaching him with a handful of splashes.

The banks are growing into ice plains, the fog is finding way to pores, as points of support on the skin, condensing air into rains.

From distant places to the earth’s edge, destroying footprints of a man, a frosty hoar on the eaves, the gospel keeps through snow its pledge.

So pray out loud, oh human race, there is a fierce sign in the sky, the waves are counting down your time, for new life will soon take your place.

God descends into the ocean along with raindrops, His arrows are sharp, pointed and streamy, We return to the lair of life, we fall into a cascade – The lips of the tide are porous and layered.

The indigo children somersault in the vortex of storms, Balancing on a high wave, they rush towards death. They can see reflections of people, insects and vines, Minerals and angels in the solar whirlwind.

Reality’s tunnels are multiplying in solid crowd Of mollusks, jellyfishes, crabs, sea-devils, skeletons... Thickness of water push us beyond the moon path To the edge of a rainbow, away from the things of the land.

Drunk Hellwig falls to a water pond and drinks slowly - as if the ice melts centuries aged. His thirst is akin to a frenzied rage… like an iceberg he floats, over the horizon.

He does not want to look in the dawn’s eyes: if a seafarer drinks – he continues to float. His sea must be a seafarer likewise And he opens wide his stinking of honey throat.

Fish comes to his purple gorge as strangers, ciliates shine like the stars in the sky. And then he splits into micro-plankton, that burns as Christmas and New Year’s shine.

When the time comes and the last ice melts, then the God's image, as the poet said, would be seen through the water where people dwelt who had never known the light.

Their hovels are made from the coral logs, sea grass thicket grow in the gardens, their transparent women are going mad for the heavy men of upper ground.

When the midnight moon will drives waves fast over the stones of the continent, a copper headed someone will comes to the masts carrying a tablet in the iron hands.

no matter how much you puff and try it will not be according to deeds He will simply come and say: ask for what you want and you’ll be given and you won’t hear how He adds in the dark all that is mine all that I want later I will take

boy making soap bubbles stand still on the edge of breath and gaze from inside as one, two and three bubbles float on water on air on stars on abyss then far and wide 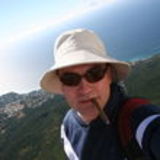 SYSTEMATIZATION OF WATER AT THE EDGE OF THE EARTH

SYSTEMATIZATION OF WATER AT THE EDGE OF THE EARTH