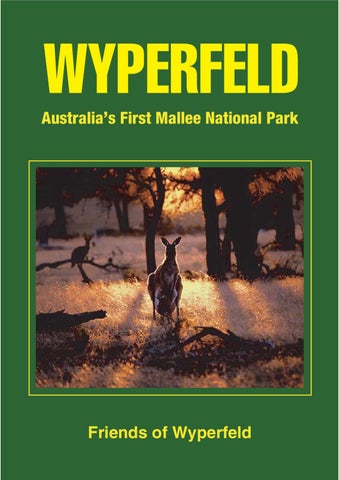 Dedicated to the memory of Frank Noelker, a foundation Friend of Wyperfeld, whose knowledge of the park was exceptional, and whose contribution to this book was invaluable.

Published 2001 by Friends of Wyperfeld National Park Inc. (A0028998F) c/- 10 Elizabeth St Elsternwick Victoria 3185 Sponsored by the Victorian National Parks Association Inc. National Library of Australia Cataloguing-in-Publication entry Durham, Geoff, 1931– Wyperfeld : Australia’s first mallee national park Bibliography Includes index ISBN 0 646 40101 7 1. National parks and reserves - Victoria. 2. Wyperfeld National Park (Vic.). I. Title 333.78099459 © Friends of Wyperfeld National Park Inc. This book is copyright. Apart from any fair dealing for the purposes of private study, research, criticism or review, as permitted under the Copyright Act, no part may be reproduced by any process without written permission from the publisher. The author and publisher have endeavoured to ensure the information in this book is correct as at March 2001, but they accept no responsibility for any inconvenience, loss or injury related to its use. Editing, illustration, typesetting, image scanning and digital preparation by Leon Costermans Printed by JPR Printworks, Notting Hill, Victoria Cover photos Front: Kangaroos at sunset (Bob Semmens) Back: Mt Mattingley at sunrise (David Neilson)

Foreword Wyperfeld was Victoria’s first Mallee national park, and also the ﬁrst such park in Australia. At the time of the initial reservation in 1909 it was relatively remote and rarely visited. As explained in this book, the advocates for the national park showed great foresight and persuasive powers to have the area set aside, at a time when most people would have considered it to be useless scrub. Compared with other national parks which had been established up to that time, such as Wilsons Promontory, Mount Buffalo and Ferntree Gully, it lacked the popular scenic or recreational values which characterised most of Australia’s early national parks. But it did have, and still has, outstanding diversity of flora and fauna, which was the principal reason for its reservation. After almost four decades of visiting Wyperfeld National Park, including many working visits for extended periods, I find that I am still fascinated by the intimate relationships between fauna, flora and the environment which are a feature of that land. And there is always something new — changes in rainfall and temperature from one year to the next bring significant changes in the flora and fauna. This book examines and explains many of the remarkable relationships occurring in nature within the park, and there are many more for observant visitors to discover for themselves. The author, Geoff Durham, has also gone to great lengths to document as accurately as possible the human history of the area which, in its own way, is just as interesting as the natural history. Unfortunately, not a lot is known of the original inhabitants, the Aboriginal people, but we must admire their ability to live with and from this sometimes harsh land for thousands of years, leaving so little impact on it. Wyperfeld is no longer remote, with bitumen roads all the way from Melbourne and Adelaide to the park’s main camp ground. Nor is it all pristine; weeds and feral animals provide a constant challenge to the park’s integrity. But if you make the effort to walk away from the popular areas, along some of the walks mentioned in this book, you will find places of great natural beauty and solitude where you have the opportunity to refresh the spirit and be at one with nature. When you go to Wyperfeld, make sure that you allow yourself time to take in the subtle beauty of this land, its nature and its history. The Friends of Wyperfeld National Park are to be congratulated on publishing this book. It brings together a huge amount of information and is an excellent guide to Wyperfeld — a magnificent national park. DON S AUNDERS Director of National Parks 1979–1994 V

About this electronic version … To many Australians, ‘the bush’—natural Australia, its landforms, its flora and fauna—is a defining attribute of their Australian identity. Among the country’s extraordinary diversity, there are special places to which they relate. One such place is Wyperfeld National Park in the Victorian Mallee, with its rich natural and human history and what has been described as subtle beauty. When the Wimmera River flooded in 1976 to fill lakes in the park that had been dry for years, many people who visited to observe this rare event became captivated by the attractions of the park and a volunteer support group, the Friends of Wyperfeld, was formed. In 2001, on its 25th anniversary, the group published ‘Wyperfeld – Australia’s First Mallee National Park’. A comprehensive guide, the book contains much information not otherwise readily available. Rather than re-print, the book is now presented electronically on the internet by arrangement with the Victorian National Parks Association. The reproduction is unaltered and complete, except for the index and Part Three: Exploring the Park, which has been omitted because of outdated visitor information. For the latest such information, readers are referred to the Parks Victoria website parkweb.vic.gov.au and to Parks Victoria Information Centre, phone 13 1963. Although we have made this electronic version of the book available free of charge, donations to either the Friends of Wyperfeld or the Victorian National Parks Association would be greatly appreciated.

HIS BOOK TELLS THE STORY

of Wyperfeld National Park. It is an invitation, an introduction and a practical guide with background information to enhance every visit, and it will serve as a lasting memento. Wyperfeld is a park of contrasts — searing summer days and cold winter nights; meandering ribbons of massive gnarled trees and vast areas of low shrubs; brilliant plumage of parrots and the subtle camouflage of the tireless malleefowl; the timelessness of mallee scrub and the dynamics of a flood plain. It is also a park of many facets and layers, a place of endless wonderment. Each part of the park has a special character. Every visit is a new experience. The place is never the same — not only will you find changes during the course of a year, but return visits at the same time in different years can also bring surprises. One year there will be many kangaroos, the next year there will be few. One year there will be a profusion of native wildflowers or grasses, the next year they will be gone. A species may flower and then not return for many years. Once in your lifetime, if you are lucky, there will be lakes brimming with fresh water. It is the combination of eternity and change that is the fascination of Wyperfeld. Always there is space, peace, pure air, dramatic sunsets and brilliant night skies. Always there are the black box flats, sombre yet subtle, the mallee trees growing in sand, the cypress-pine sentinels, the spiked rings of porcupine-grass, and in the west, the vast expanse of seemingly featureless dunes. But within all this there is change, sometimes as dramatic as fire or, more rarely nowadays, flood. Imperceptible though it may be, the trees, porcupine-grass and dune scrub are moving through their life cycles. Within, above and below the vegetation there is a dynamic world of action and interaction, of dependency and of change, to be discovered, absorbed, appreciated and enjoyed by those who take the time to observe. The park is in the southern Mallee region of Victoria, Australia, about 450 km north-west of Melbourne. The name itself is one of the mysteries of Wyperfeld. It is taken from the parish in which the original section of the park is situated and there are various theories as to its origin. It may be derived either from the old German name, Wyper, a tributary of the Rhine river, and feld, field, or from the Welsh, wye, water. You might hear the name pronounced with any combination of wiper, wipper, field and feld, but the accepted version is wiper feld. With an area of 357,017 ha, Wyperfeld is the third largest of Victoria’s thirtysix national parks. Only the Alpine National Park and Murray-Sunset National Park are bigger. Wyperfeld is in the Big Desert, part of the Victorian bioregion 