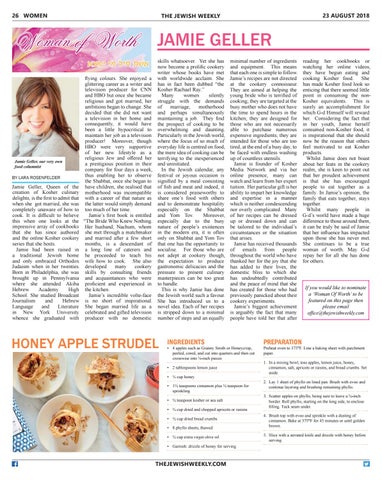 skills whatsoever. Yet she has now become a prolific cookery writer whose books have met flying colours. She enjoyed a with worldwide acclaim. She glittering career as a writer and has in fact been dubbed “the television producer for CNN Kosher Rachael Ray.” and HBO but once she became Many women silently religious and got married, her struggle with the demands ambitions began to change. She of marriage, motherhood decided that she did not want and perhaps simultaneously a television in her home and maintaining a job. They find consequently, it would have the prospect of cooking to be been a little hypocritical to overwhelming and daunting. maintain her job as a television Particularly in the Jewish world, producer! Moreover, though where the focus of so much of HBO were very supportive everyday life is centred on food, of her new lifestyle as a the mere idea of cooking can be religious Jew and offered her terrifying to the inexperienced Jamie Geller, our very own a prestigious position in their and uninitiated. food columnist company for four days a week, In the Jewish calendar, any thus enabling her to observe festival or joyous occasion is BY LARA ROSENFELDER the Shabbat, once she began to signified by a meal consisting Jamie Geller, Queen of the have children, she realised that of fish and meat and indeed, it creation of Kosher culinary motherhood was incompatible is considered praiseworthy to delights, is the first to admit that with a career of that nature as share one’s food with others when she got married, she was the latter would simply demand and to demonstrate hospitality completely unaware of how to too much of her time. especially on the Shabbat cook. It is difficult to believe Jamie’s first book is entitled and Yom Tov. Moreover, this when one looks at the “The Bride Who Knew Nothing. especially due to the busy impressive array of cookbooks Her husband, Nachum, whom nature of people’s existences that she has since authored she met through a matchmaker in the modern era, it is often and the online Kosher cookery and married after a few short only on Shabbat and Yom Tov series that she hosts. months, is a descendant of that one has the opportunity to Jamie had been raised in a long line of caterers and socialise. For those who are a traditional Jewish home he proceeded to teach his not adept at cookery though, and only embraced Orthodox wife how to cook. She also the expectation to produce Judaism when in her twenties. developed many cookery gastronomic delicacies and the Born in Philadelphia, she was skills by consulting friends pressure to present culinary brought up in Pennsylvania and acquaintances who were masterpieces can be too great where she attended Akiba proficient and experienced in to handle. Hebrew Academy High the kitchen. This is why Jamie has done School. She studied Broadcast Jamie’s incredible volte-face the Jewish world such a favour. Journalism and Hebrew is no short of inspirational. She has introduced us to a Language and Literature She began married life as a novel idea. Each of her recipes in New York University celebrated and gifted television is stripped down to a minimal whence she graduated with producer with no domestic number of steps and an equally

minimal number of ingredients and equipment. This means that each one is simple to follow. Jamie’s recipes are not directed at the cookery connoisseur. They are aimed at helping the young bride who is terrified of cooking; they are targeted at the busy mother who does not have the time to spend hours in the kitchen; they are designed for those who are not necessarily able to purchase numerous expensive ingredients; they are intended for those who are too tired, at the end of a busy day, to be faced with endless washing up of countless utensils. Jamie is founder of Kosher Media Network and via her online presence, many can watch and learn from her expert tuition. Her particular gift is her ability to impart her knowledge and expertise in a manner which is neither condescending nor overly complicated. Many of her recipes can be dressed up or dressed down and can be tailored to the individual’s circumstances or the situation that arises. Jamie has received thousands of emails from people throughout the world who have thanked her for the joy that she has added to their lives, the domestic bliss to which she has undoubtedly contributed and the peace of mind that she has created for those who had previously panicked about their cookery experiments. Jamie’s biggest achievement is arguably the fact that many people have told her that after

reading her cookbooks or watching her online videos, they have begun eating and cooking Kosher food. She has made Kosher food look so enticing that there seemed little point in consuming the nonKosher equivalents. This is surely an accomplishment for which G-d Himself will reward her. Considering the fact that in her youth, Jamie herself consumed non-Kosher food, it is inspirational that she should now be the reason that others feel motivated to eat Kosher products. Whilst Jamie does not boast about her feats in the cookery realm, she is keen to point out that her proudest achievement is that she has encouraged people to eat together as a family. In Jamie’s opinion, the family that eats together, stays together. Whilst many people in G-d’s world have made a huge difference to those around them, it can be truly be said of Jamie that her influence has impacted upon those she has never met. She continues to be a true woman of worth. May G-d repay her for all she has done for others.

If you would like to nominate a ‘Woman Of Worth’ to be featured on this page then please email office@thejewishweekly.com

• 4 apples such as Granny Smith or Honeycrisp, peeled, cored, and cut into quarters and then cut crosswise into ¼-inch pieces

2. Lay 1 sheet of phyllo on lined pan. Brush with evoo and continue layering and brushing remaining phyllo. 3. Scatter apples on phyllo, being sure to leave a ½-inch border. Roll phyllo, starting on the long side, to enclose filling. Tuck seam under. 4. Brush top with evoo and sprinkle with a dusting of cinnamon. Bake at 375°F for 45 minutes or until golden brown. 5. Slice with a serrated knife and drizzle with honey before serving.