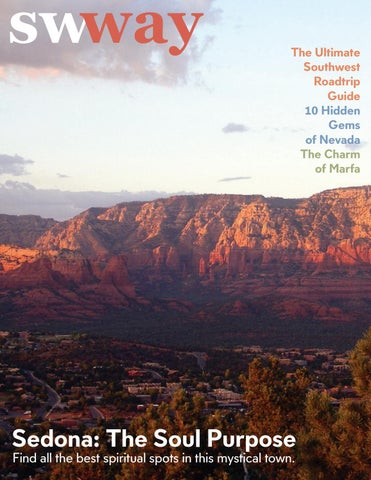 Sedona: The Soul Purpose Find all the best spiritual spots in this mystical town.

ocals call Sedona, Arizona, a cathedral without walls. It’s not just the landscape – those red cliffs, mesas rearing up against a crisp and empty sky, that inspired Hollywood producers of the 1930s and 40s to shoot westerns such as Broken Arrow and Stagecoach in the area. Three million tourists a year come to this town of barely 10,000, nestled among towering rusty sandstone rock formations in the northern Verde valley. Many of these visitors are pilgrims, particularly at this time of year, headed to Arizona in search of spiritual renewal. Sedona has no major churches, no relics, no established holy sites. But what it does have are “vortexes” – a series of unmarked points around Sedona’s various cliffs that locals and visitors alike imbue with new-age significance.

Where that significance comes from – like the actual number of vortexes in Sedona, which varies from guide to guide – is subject to debate. Locals cite legends about the area’s sanctity to local Native American tribes. However, Sedona didn’t become America’s new age capital until the 1980s, when a US psychic named Page Bryant identified the vortexes after a vision. These vortexes were places where spiritual energy was at its highest point, where you could tap into the frequencies of the universe, where you could, by closing your eyes, start to change your life. Spiritual seekers across the country listened. In 1987, Sedona was host to one of the largest branches of the Harmonic Convergence – a new age synchronized meditation – when 5,000 pilgrims came to get in touch with the universe at the Bell Rock butte, believed by many to be a vort.

Amitabha Stupa The Amitabha Stupa in the stunning red rock country of Sedona, Arizona, is a place for meditation and spiritual renewal.

Now, among the juniper trees, you can find strip-malls full of crystal shops, aura-reading stations and psychics. At ChocolaTree Organic Eatery, shiva lingams – statues normally associated with Hindu temples – stand against the walls; next door, a UFO-themed diner called ET Encounter (formerly the Red Planet) serves Roswell-themed burgers and old Star Trek episodes play on the TV. Every other office along the state route running through town offers a “spiritual tour” of the vortexes. The national forests are full of small cairns people have left as spiritual offerings.

These are regularly removed by forest service rangers in order to preserve the site’s ecological integrity. Many of Sedona’s businesses are also geared towards wellbeing and purification, if not enlightenment: the town’s highest-end “hotel”, L’Auberge de Sedona (rooms from $270), which consists of luxury cottages and lodges, supplements traditional spa offerings with an outdoor “creekside massage”, where guests are invited to dip their feet in the river and squelch mud between their toes, washing off the dirt with creek water scented with flower petals.

Bell Rock Bell Rock is a popular landmark and tourist attraction just north of the Village of Oak Creek, Arizona, south of Sedona in Yavapai County.

My own hotel, the Sedona Rouge (doubles from $150 B&amp;B), a ranch-inspired boutique hotel near Coffee Pot Rock, which towers over western Sedona, offers guests morning poolside yoga sessions before their turmeric-tofu breakfast scrambles. Near the centre of town, the McLean Meditation Institute avoids the language of what owner Sarah McLean calls the “woos” – those locals who take their magic and their crystals a bit too seriously – by offering mindfulness and meditation classes that, though influenced by eastern traditions, are geared. swway • 4.19 pg. 5

When I sit cross-legged in her studio, which overlooks a hiking supply store and several Native American-inspired art galleries, McLean identifies my neuroses and gives me a few maxims for meditation: focus less on the future and on all that work I have to do, and give myself over to awareness of the present. It’s easy to be sceptical about Sedona. The relentless barrage of wellness and self-improvement-focused tourism can border on the cloying (after a delicately-spiced breakfast of quinoa and almond milk at ChocolaTree, I find myself all but begging a waitress at a nearby downmarket diner to give me the strongest, worst-quality filter coffee she can find). My vortex tour with Mark Griffon of Sedona Mystical Tours ($135, three hours) – who starts off the morning with a sage cleansing near a stone-circle “medicine wheel” he’s assembled himself in his backyard – is at times uncomfortably intense, as one of the attendees breaks down into sobs during a meditation against a juniper tree called.

But Sedona’s natural beauty – rearing rust-stained rock faces, orange-dust pathways around sage-scented mesas, searing blue skies – induces, if not spirituality, then at least a certain awe. My favourite moments there are not the guided meditations or the past life readings, but when I can hike, wander, explore on my own. Walking through the yucca strands and mesquite branches, in the rust-and-gold shadow of the vortex site known as Cathedral Rock; listening to the sound of another traveller’s panpipes on the top of Airport Mesa; sneaking away from a tour to close my

eyes and feel the scorching sun on my skin, sitting alone with a book and (mercifully strong) coffee at the Oak Creek Brewery and Grill hearing the creek murmur in the distance – all these provoke a sensation as close to mindfulness as any I’d experienced. I don’t know if I am in a cathedral. But there are worse ways to spend a Sunday morning. swway • 4.19 pg. 7

Marfa, Texas: Tough to get to, tougher still to explain, but once you get here, you get it.â&amp;#x20AC;? www.visitmarfa.com

A feature spread with front and back cover mock-up for a hypothetical southwestern magazine, made using an online article and free-use images for a graphic design class.