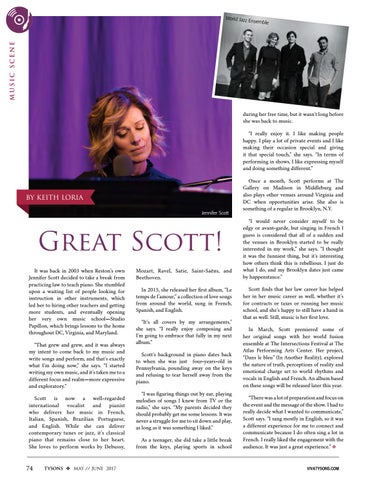 during her free time, but it wasn’t long before she was back to music. “I really enjoy it. I like making people happy. I play a lot of private events and I like making their occasion special and giving it that special touch,” she says. “In terms of performing in shows, I like expressing myself and doing something different.”

Great Scott! It was back in 2003 when Reston’s own Jennifer Scott decided to take a break from practicing law to teach piano. She stumbled upon a waiting list of people looking for instruction in other instruments, which led her to hiring other teachers and getting more students, and eventually opening her very own music school—Studio Papillon, which brings lessons to the home throughout DC, Virginia, and Maryland. “That grew and grew, and it was always my intent to come back to my music and write songs and perform, and that’s exactly what I’m doing now,” she says. “I started writing my own music, and it’s taken me to a different focus and realm—more expressive and exploratory.” Scott is now a well-regarded international vocalist and pianist who delivers her music in French, Italian, Spanish, Brazilian Portuguese, and English. While she can deliver contemporary tunes or jazz, it’s classical piano that remains close to her heart. She loves to perform works by Debussy,

Mozart, Ravel, Satie, Saint-Saëns, and Beethoven. In 2015, she released her first album, “Le temps de I’amour,” a collection of love songs from around the world, sung in French, Spanish, and English. “It’s all covers by my arrangements,” she says. “I really enjoy composing and I’m going to embrace that fully in my next album.” Scott’s background in piano dates back to when she was just four-years-old in Pennsylvania, pounding away on the keys and refusing to tear herself away from the piano. “I was figuring things out by ear, playing melodies of songs I knew from TV or the radio,” she says. “My parents decided they should probably get me some lessons. It was never a struggle for me to sit down and play, as long as it was something I liked.” As a teenager, she did take a little break from the keys, playing sports in school

Once a month, Scott performs at The Gallery on Madison in Middleburg and also plays other venues around Virginia and DC when opportunities arise. She also is something of a regular in Brooklyn, N.Y. “I would never consider myself to be edgy or avant-garde, but singing in French I guess is considered that all of a sudden and the venues in Brooklyn started to be really interested in my work,” she says. “I thought it was the funniest thing, but it’s interesting how others think this is rebellious. I just do what I do, and my Brooklyn dates just came by happenstance.” Scott finds that her law career has helped her in her music career as well, whether it’s for contracts or taxes or running her music school, and she’s happy to still have a hand in that as well. Still, music is her first love. In March, Scott premiered some of her original songs with her world fusion ensemble at The Intersections Festival at The Atlas Performing Arts Center. Her project, “Dans le bleu” (In Another Reality), explored the nature of truth, perceptions of reality and emotional charge set to world rhythms and vocals in English and French. An album based on these songs will be released later this year. “There was a lot of preparation and focus on the event and the message of the show. I had to really decide what I wanted to communicate,” Scott says. “I sang mostly in English, so it was a different experience for me to connect and communicate because I do often sing a lot in French. I really liked the engagement with the audience. It was just a great experience.” v