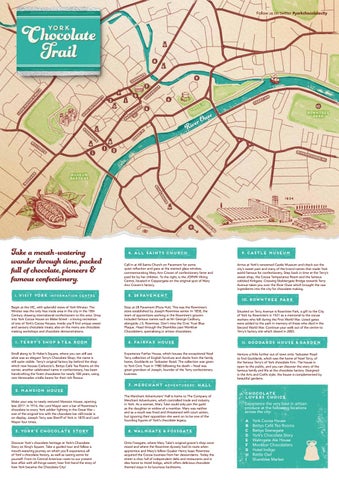 Begin at the VIC, with splendid views of York Minster. The Minster was the only free trade area in the city in the 18th Century drawing international confectioners to this area. Drop into York Cocoa House on Blake Street - a loving recreation of one of York’s Cocoa Houses. Inside you’ll find unique sweet and savoury chocolate treats; also on the menu are chocolate making workshops and chocolate demonstrations.

1. Terry's Shop & tea Room Stroll along to St Helen’s Square, where you can still see what was an elegant Terry’s Chocolate Shop; the name is still quite visible. Terry’s original factory lay behind the shop which now houses Carluccio’s. Bettys Café Tea Rooms on the corner, another celebrated name in confectionery, has been handcrafting the finest chocolates for nearly 100 years, using rare Venezuelan criollo beans for their rich flavour.

Call in at All Saints Church on Pavement for some quiet reflection and gaze at the stained glass window, commemorating Mary Ann Craven of confectionery fame and paid for by her children. To the right, is the JORVIK Viking Centre, located in Coppergate on the original spot of Mary Ann Craven’s factory.

Stop at 28 Pavement (Pizza Hut). This was the Rowntree’s store established by Joseph Rowntree senior. In 1858, the team of apprentices working in the Rowntree’s grocers included famous names such as Mr George Cadbury, alongside J.S. Rowntree. Don’t miss the Civic Trust Blue Plaque. Head through the Shambles past Monkbar Chocolatiers, specialising in artisan chocolates.

3. York's chocolate story Discover York's chocolate heritage at York’s Chocolate Story on King’s Square. Take a guided tour and follow a mouth-watering journey on which you'll experience all of York's chocolate history, as well as tasting some for yourself. From its Central American roots to our present love affair with all things sweet; hear first-hand the story of how York became the Chocolate City!

Venture a little further out of town onto Tadcaster Road to find Goddards, which was the home of Noel Terry, of the famous Terry’s of York chocolate firm. The house is open to the public, and you can discover the story of the famous family and life at the chocolate factory. Designed in the Arts and Crafts style, the house is complemented by beautiful gardens.

2. Mansion House Make your way to newly restored Mansion House, opening late 2017. In 1914, the Lord Mayor sent a bar of Rowntree’s chocolate to every York soldier fighting in the Great War – one of the original tins with the chocolate bar still inside is on display. Joseph Terry was Sheriff of York in 1870 and Lord Mayor four times.

Situated on Terry Avenue is Rowntree Park, a gift to the City of York by Rowntree’s in 1921 as a memorial to the cocoa workers who fell during the First World War. Listed gates were added to the park in memory of those who died in the Second World War. Continue your walk out of the centre to Terry’s factory site which closed in 2005.

Experience Fairfax House, which houses the exceptional Noel Terry collection of English furniture and clocks from the family home, Goddards on Tadcaster Road. The collection was given to York Civic Trust in 1980 following his death – Noel was great grandson of Joseph, founder of the Terry confectionery business.

Arrive at York’s renowned Castle Museum and check out the city’s sweet past and many of the brand names that made York world famous for confectionery. Step back in time at the Terry’s sweet shop, the Cocoa Temperance Room and the famous cobbled Kirkgate. Crossing Skeldergate Bridge towards Terry Avenue takes you over the River Ouse which brought the raw ingredients into the city for chocolate making.

The Merchant Adventurers’ Hall is home to The Company of Merchant Adventurers, which controlled trade and industry in York. As a woman, Mary Tuke could only join the guild as the daughter or widow of a member. Mary was neither and as a result was fined and threatened with court action, but ignoring their opposition she went on to be one of the founding figures of York’s chocolate legacy.

8. Walmgate & Fossgate Onto Fossgate, where Mary Tuke’s original grocer’s shop once stood and where the Rowntree dynasty had its roots when apprentice and Mary’s fellow Quaker Henry Isaac Rowntree acquired the Cocoa business from her descendants. Today the street is choc full of independent delis and restaurants and is also home to Hotel Indigo, which offers delicious chocolate themed stays in its luxurious bedrooms.

Experience the very best in artisan produce at the following locations across the city: A B C D E F G H I

Explore more ways to experience chocolate in the city... Chocolate Week Celebrate National Chocolate Week in York every October which showcases the best of fine chocolates and confectionery. Witness the work of top chocolatiers and chocolate making companies - giving us all a great excuse to indulge our love of chocolate! Loads of chocolatethemed activities will be happening all over the city to celebrate York’s contribution to how we enjoy chocolate in the UK today. chocolateweek.co.uk

York Chocolate Festival Come along to York’s Chocolate Festival as part of the York Easter Festival, which takes place every year over the Easter weekend. This four-day celebration of all things chocolate focuses on local artisan chocolatiers, with a chocolate market, workshops and chocolate tastings. Don’t miss out on this yummy highlight of the city’s festival calendar. yorkchocolatefestival.co.uk

At York’s Chocolate Story you can discover the stories behind the greatest names in chocolate and unwrap the secrets of chocolate making. A fully guided tour and three floors of interactive exploration take you on a journey through the city where chocolate made history. York’s fame and fortune have rested on chocolate for almost 300 years: thanks to the vision and invention of its great entrepreneurial families, not to mention the industry and dedication of its people. At York’s Chocolate Story you’ll uncover the fascinating heritage that helped shape the city. Though much has changed over the centuries,York remains the UK’s home of chocolate.

While other northern cities made their wealth from wool, cotton and steel, York went its own sweet way and built a city from chocolate. Its rivers brought in the vital ingredients, while the railways transported the final products at speed around the country. Some of the world’s most well-known names in chocolate began life in York – Rowntree’s created Kit Kat, Smarties and Aero, while Terry’s came up with the Chocolate Orange and All Gold collection, and Craven's were famous for their French Almonds and Mary Ann Toffees. These global brands are inextricably linked with York’s social and industrial development. The city recently celebrated 250 years of being home to the renowned confectioner Terry’s. Today, this sweet legacy continues with treats ranging from humbugs to fudge produced in the city, with chocolate remaining a vital part of York’s past, present and future.

In 1646, after a five year apprenticeship with a master craftsman, John Reilly was awarded freemanship of the city as a ‘Confectioner’, a new profession to York. The award highlights the wealth of experience in this skilled vocation within the city at the time, ahead of other locations within the country, establishing York as the Chocolate City.

Meanwhile, Bayldon and Berry, combined their expertise as a grocer and an apothecary by using a tempting new arrival – sugar – to ‘sweeten their pills’. In 1823, Joseph Terry married into the Berry family eventually taking over the business. His son named it Terry’s of York and established its factory on Bishopthorpe Rd, which still remains part of the York skyline today.

The Quaker religion was the foundation to a number of thriving chocolate families in the city, the religious group favoured the cocoa industry because it offered workers an alternative to strong drink. Characters such as the pioneering Mary Tuke and Joseph Rowntree, central to York’s chocolate legacy came from such dynasties.

York of the 18th and 19th centuries was a fashionable place of grand dinners and balls. With this discerning public, Rowntree’s and Terry’s found an ideal audience for their highly esteemed confections. Steam power and the railways brought workers to their factories and took their chocolate to markets worldwide, enabling their businesses to grow into global empires.

In 1862, the chocolate side of the business was sold to the factory foreman, fellow Quaker Henry Isaac Rowntree. Henry ran into financial troubles, so to sort out his money woes he turned to his brother Joseph who hired a professional confectioner. After Henry’s death in 1883, Joseph took control and moved the expanding operation to the chocolate factory on Haxby Road.

York’s sweet story is about more than just chocolate. Mary Craven’s factory on Coppergate had been producing boiled sweets since 1854 – sugared almonds, toffees and mint humbugs remain a treasured treat today. Today, chocolate and all things sweet have enriched York with a lasting legacy of iconic buildings, artisan confectionery producers and independent chocolate shops. The story is celebrated at York’s Chocolate Story in King’s Square which honours the people and industry that make York a centre for all things sweet. 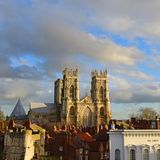 Take a bite out of York’s sweet past with the brand new York Chocolate Trail. Follow in the footsteps of the famous confectioners which ma...

Take a bite out of York’s sweet past with the brand new York Chocolate Trail. Follow in the footsteps of the famous confectioners which ma...