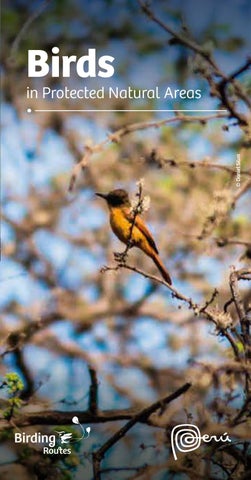 A single trip is not enough to discover all the wonders that Peru has to offer. With more than 1800 bird species, 106* of which are endemic, Peru is a true paradise of birdwatching. *According to the South American Classification Commiee of the American Ornithologistsâ&#x20AC;&#x2122; Union (AOU). **Important Bird Areas (important areas for bird conservation)

This is a very sociable bird that lives in large colonies; it feeds mainly on anchovies. NPA: Paracas National Reserve (IBA)** Endemic: Yes, from the Humboldt Current

Characteristics Deep red beak and legs, and a bluish black head and forehead. The whole body is dark gray. Under its beak it has a yellow fleshy growth and from the base of the beak there are white moustaches that curve downwards and forwards. Length: approx. 40 cm Threat: Vulnerable (VU)

Habitat: In rocky areas near the coast. Endemic species of the Humboldt current found on the coast of Peru.

This bird feeds mainly on fish, mollusks and amphibians and builds its nest in the tops of the tallest trees. NPA: Pacaya Samiria National Reserve (IBA)** Endemic: No

Characteristics It has a large bill and black and red neck.

Habitat: Can be seen in the different rivers within the Reserve

Jabiru is one of the largest storks in Peru.

Medium-sized bird, which can usually be seen in an upright position.

Characteristics Males are characterized by a rust-coloured belly and forehead, while females have a black body Length: 18 to 19 cm Threat: Endangered

Best time for observation: April - November (in the breeding season)

Habitat: Areas with dense and semi-dense forest. The best place to see it is in front of the millenary tree, where the Cortarrama route begins, as well as in the PalerĂ­a sector.

In the mornings and afternoons, males get together in exhibition places called leks, where they compete with each other in order to find a mate. NPA: Manu National Park (IBA)** Endemic: No

Characteristics This bird has a yellow beak and yellow legs, while its head, characterized by a rounded crest, is projected up to its beak. Its plumage is mostly intense red, while its wings and tail are shiny black. Length: 31 to 33 cm threat: Least Concern (LC)

Habitat: Mountain forests near San Pedro. (at 2300 m altitude) This species is most easily observed between 5 and 6 am in the area of San Pedro on the Manu road, between Acjanaco and Tono.

This bird feeds mainly on sloths and monkeys, and sometimes on large birds. It builds its nests in large trees where it raises only one chick every 2 or 3 years; harpy eagles are known to mate for life. NPA: Tambopata National Reserve (IBA)** Endemic: No

Characteristics Females are larger than males and weigh up to 11 kg., while the males weigh only about 6 kg. Both have the same plumage features.

Habitat: In the entire reserve between the ceibos, shihuahuaco, and chestnut trees. This is the biggest eagle in the Americas.

This bird normally inhabits the forest canopy in the company of other bird species and forms what is known as a mixed canopy flock. It feeds on small insects. NPA: Allpahuayo Mishana National Reserve (IBA)** Endemic: Yes

Characteristics Thin black bill and legs. Grey plumage, its chest and the boom of its tail are white and it has long wings.

Habitat: Varillal forests. The greatest chances to observe this rare species are found in the varillal forests located on the premises of INIA (National Institute of Agrarian Innovation); as well as in the surroundings of the communities of Nueva Esperanza and Mishana (Nanay River).

This bird normally remains immobile for long periods at the water's edge, with its neck extended diagonally. It is a solitary bird, although it is sometimes seen in groups in open areas or on the edge of wetlands. NPA: Los Manglares de Tumbes National Sanctuary Endemic: No

Characteristics Yellow-green skin on the face and orange iris; it differs from other species by its white bare throat. Length: 80 cm Threat: Least Concern (LC)

Habitat: In the mangroves, from the marshes and canals, with greater chances from the trail towards the viewpoint that exists inside the mangrove and in the Envidia estuary. It was given its name because of its beautifully striped neck.

It forages near the ground, solitary or in pairs, between bushes and in the undergrowth. NPA: Ampay National Sanctuary (IBA)** Endemic: Yes

Characteristics Generally dark grey, with a rufous or reddish crown and wings, and a long, dark tail. The tails of some individual birds show blunt edges. Length: 19 to 20 cm Threat: Vulnerable (VU)

Habitat: Forests and shrub vegetation between 3000 and 3600 metres above sea level. This bird is most likely to be seen in the Intimpas forest before 8 a.m.

This bird forages in the canopy and understory of the mountainous rainforest, often in flocks of mixed species. NPA: Alto Mayo Protected Forest (IBA)** Endemic: Yes

Characteristics The males have more grey on their throat, chest and flanks. The females have superciliums, throats and chests of a distinctive suede color. As this bird is difficult to spot, it is often aracted using playback. Length: 12 cm Threat: Endangered (EN)

Habitat: Canopy and montane rainforests. This bird is most likely to be seen in La LlanterĂ­a, in the northern part of the NPA.

Along the Peruvian coast, in the waters of the Humboldt Current, live several sea birds, i.e. birds that can only be seen at a certain distance from the coast. These birds include one species many wildlife enthusiasts consider a "must see" bird: the Inca tern. Due to its elegant plumage it is one of the most distinguished varieties of its family. You will be able to see it between the rocks or even while resting on one of the sides of your boat.

As the water level starts to decrease in the Amazon lowlands, you will be able to see a great variety of mollusks, amphibians, and birds. The Pacaya Samiria National Reserve, with a surface area of 2,080,000 hectares, is located at the confluence of two large rivers, namely the MaraĂąĂłn and the Ucayali. There, between meandering rivers, mirrored waters and torrential rains, you will have the pleasure to meet one of the largest storks in Peru: the Jabiru.

The adventure begins with a visit to the carob trees in the Bosque de Pomac Historical Sanctuary. In this 5887-hectare equatorial dry forest you will find a huge carob tree of more than 500 years old, to which the locals aribute miracles and legends. It is known as the millennial tree and close to it you will be able to find one of the most endangered bird species in the northern part of Peru, as well as one of the most sought after by birdwatchers: the Peruvian plantcuer. At this point you will start the Cortarrama route, a natural birding route that takes about 20 minutes.

Los Manglares de Tumbes National Sanctuary Bare-throated tiger heron Tigrisoma mexicanum Very close to the city of Tumbes, on the northern border of Peru, you will find an environment surrounded by mangroves; tall and leafy trees that have given the place its name: Los Manglares de Tumbes National Sanctuary. You will visit the Almejas, Roncal, Correa and Matapalo islands, where several birds cross the sky offering a beautiful spectacle. On the edges of the vegetation, in the wooded streams, you will be able to see a solitary bird with a striped neck: the bare-throated tiger heron.

On the Manu road, between Acjanaco and Tono, and near the famous Tres Cruces Viewpoint, you will find one of the most famous members of the cotingo family: the Andean cock-of-the-rock, which is one of the most spectacular and well-known birds in the world. The males of this species --intensely orange colored, with black backs and grey wings-gather in traditional sites known as leks, where they sing and dance, while lowering their heads and raising their wings, in order to aract the females. A unique experience that you will never forget.

After a boat trip from Puerto Maldonado and a walk through the jungle, you will reach a captivating territory with a wealth of flora and fauna species. Hundreds of colorful and noisy birds will accompany you on your way and many of them will be closer than you think, as the Tambopata National Reserve gathers about 632 different species including one of the world's largest and most majestic birds of prey: the Harpy Eagle. This bird is so strong that its main food sources are the sloths and monkeys that live among the branches of the trees.

A short distance from the city of Iquitos, in the lower Nanay, there is a forest that grows on white sand. Its soil has few nutrients, but the vegetation is well adapted to these poor soil conditions and forms high forests of up to 25 to 30 meters, known as white sand forests or varillales, which are home to a low richness of species restricted to this type of habitat. Among them is the Iquitos gnatcatcher, a small and rare bird with grey plumage and a white chest, which is a favorite among bird watchers.

On the slopes of the snow-capped Ampay mountain, between 3000 and 3600 meters above sea level, one of the most impressive rainforest formations is located. The Intimpas forest is one of the most valuable areas of this Sanctuary. If you arrive early, you will find a great variety of endemic birds. Among them, you can observe the Apurímac spinetail, which is considered endemic and classified as vulnerable.

Located north of the Alto Mayo rainforest, in an area known as Chuquillantas or La Llantería, a mountain ridge can be found. This area is recognized by birdwatchers as a place of frequent passage of mixed flocks. If you watch carefully in the treetops or in the forest with a relatively closed canopy, with a bit of luck you are able to see a unique grey bird: the Ash-throated antwren.

FREE DISTRIBUTION. NOT FOR SALE. 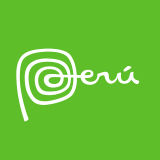 Peru hosts the second largest number of bird species in the world. We have around 1800 species, 109* of which are endemic. This means that P...

Peru hosts the second largest number of bird species in the world. We have around 1800 species, 109* of which are endemic. This means that P...