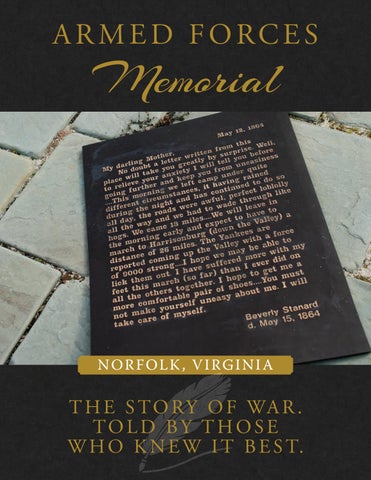 As an Army captain who served his nation during World War II, John R. Burton knew, and never forgot, what it meant to go to war and how much it mattered to be welcomed on your return home. For years he organized homecoming parties for returning troops, frequently flying out to escort ships on their return to port. When he died, in 1992, he left $500,000 to the City of Norfolk to establish a memorial commemorating the lives of all of those who died serving their nation during times of war. It was Mr. Burton’s wish the Armed Forces Memorial be located downtown, a quiet place near the center of activity, and in a place with many views. Knowing how important this memorial would be to Americans, the City of Norfolk and the Greater Norfolk Corporation, a private organization dedicated to promoting economic growth in the city, committed to raising the remaining funds to complete the project. A five-month long campaign led by community leaders raised hundreds of thousands of additional dollars to construct the memorial.

The Armed Forces Memorial is connected to Town Point Park by two bridges. Within the memorial are 20 inscriptions from letters written home by U.S. service people who lost their lives in war. The letters have been cast in thin sheets of bronze, and are scattered across the ground as if blown there by the wind. Seats, which face out to the waterway, encourage rest and contemplation of the words from people who never came home.

Hallmark of Norfolk The memorial adds to Norfolk’s already distinguished tradition of supporting the military and honoring America’s military heritage. The city is home to the world’s largest naval base, the Douglas MacArthur Memorial, the Hampton Roads Naval Museum inside Nauticus, and the Battleship Wisconsin.

The Armed Forces Memorial is located in Town Point Park, which hosts many of the city's celebrations. From the quiet of the tree lined memorial, visitors can sit at the edge of the Elizabeth River and watch ships pass through one of the world’s busiest harbors – located on a river that has, for more than 200 years, carried servicemen off to war and returned them home to loved ones.

From the memorial, visitors looking west will share the same perspective as those who throughout history have stood on Norfolk's shores and welcomed soldiers home. From the water, boaters see the memorial against the backdrop of the beautifully landscaped Town Point Park.

Where did the le††ers come from? The letter excerpts used in the Armed Forces Memorial were located in libraries, archives and a Norfolk area public letters solicitation.

…War looks a great deal better in the newspaper, than anywhere else…

…This experience, this absence from you, is burning its brand into my soul…

Below are quotations from some of the letters.

The birds warble all the time, even when there is considerable activity, and it seems to me that

…Dear God, spare our lives, for we are young

their voices never sounded so sweet before…

and love life so much…

…Sara, my love for you is deathless. It seems to bind me with mighty cables that nothing but Omnipotence can break and yet my love of country comes over me like a strong wind and bears me irresistibly with all those chains to the

A. MEYER DAVIS, JR. was the son of the wellknown orchestra leader, and was himself a violinist. He enlisted in the Navy immediately after the attack on Pearl Harbor. A Petty Officer Second Class, Davis was listed as missing in action after the sinking of the destroyer BUCK in 1943 off Salerno, Italy, just before his 21st birthday.

B. FRANCES Y. SLANGER was a Lieutenant in

the Army Nurse Corps with the 45th Field Hospital near Henri Chapelle in Belgium. She wrote this letter to the Editor of Stars and Stripes in 1944, the night before she was killed in the line of duty by shellfire, one of 201 Army nurses who died during WW II.

Class, was killed in action in Vietnam in 1971.In June 1974, Harper’s magazine published 20 postcards and letters from Kinsley to his parents and his best friend, chronicling four months of war.

D. JOHN CHILTON was Captain of the Third Virginia

Infantry Regiment in the Revolutionary War. He was mortally wounded in 1777 at the Battle of Brandywine, but refused to be carried off the field until the battle was over, so as not to discourage his men.

veteran, awarded the Bronze Star for heroism in Germany. He was recalled to active duty in Korea, serving as an Army Lieutenant and platoon leader of Company C, 5th Infantry Regiment, 24th Division. In 1951, Jones was wounded in a successful fight to hold the platoon’s position and died in a M.A.S.H unit.

soldier in the Civil War, fought disguised as a man under the name Lyons Wakeman. She marched almost 700 miles through Louisiana and then fought in the battle at Pleasant Hill in 1864, part of the ill-fated Red River Campaign. She died of dysentery at age 21 in New Orleans Barracks.

graduated from Granby High School, fought in Vietnam as Private First Class, Company A, 2nd Battalion, 502nd Infantry, 101st Airborne Division, based at An Hoa. Price wrote his letter in 1966 while on the patrol in which he later died; he escaped an attack and countered to lead the medics back in to rescue five men. Price was killed in the effort.

of 1812 with Captain Robert Hooke’s Company of Riflemen, volunteers from Rockingham County, Virginia. Ogg was killed in action or died of illness while in service in 1813, at the estimated age of 35.

I. FRANCIS M. TRACY, a 2nd Lieutenant of

Infantry in the Army in the First World War, was killed in action in France in 1918. The young wife to whom he wrote kept all his letters, including one from Tracy’s Colonel: “[He was] struck by a piece of high explosive shell which went over his head, landed about 100 yards past him, exploded & threw the piece backward – one of those strokes of fate...”

Louisiana in the Civil War, participated in the siege of Yorktown and the battles of Williamsburg, Seven Pines, and Cedar Mountain. Miller was killed in action at Second Manassas in 1862, at the age of 21. His father had arrived for a visit before the battle and was there to bury his son.

Gulf War as a Private First Class in the Army. He and his mother were prolific letter-writers; during the war she wrote him every day and he let the other soldiers read his letters, since some of them got no mail. “Wes” died in a mistaken attack by U.S. tanks in 1991. He was awarded a Bronze Star for refusing aid from the medics until other wounded were treated.

L. ROBERT J. SIMMONS was a First Sergeant in

R. ROBERT A. BAUM was a Private First Class,

the 54th Regiment of Massachusetts Volunteer Infantry, the black regiment led by Colonel Robert Gould Shaw in the Civil War. Simmons was wounded and captured in the famous assault of Fort Wagner, South Carolina, July 18, 1863, and died in prison in Charleston.

Aerial Radio Gunner with the U. S. Marine Corps during World War II. He was reported missing in 1943 while on active duty in the Southwest Pacific. Baum wrote his last letter to his sister at the beginning of the action in which his plane disappeared.

S. JOHN TRAIN, JR. was a Private in F Company

Norfolk and graduated from West Point. In Vietnam, he served as an Army Major, Engineer, 86th Engineer Battalion Operations. Bunting volunteered on the first day of the Tet offensive to fly to Ben Luc and assist in the defense of the isolated “C” Company. He was killed in action on that mission in 1968.

N. SULLIVAN BALLOU, Speaker of the House in the Rhode Island state legislature joined the second Rhode Island regiment as a major in the Civil War. He wrote to his wife on the eve of the first Battle of Bull Run in 1861. Early in the battle he was struck by a cannonball and died in a makeshift hospital.

of the Seventh Marines in Korea. Train was sent out on a mission on his twentieth birthday, in 1953, and was reported missing the following day. His body was recovered nine months later. He wrote his family, “The most important thing is still mail; as long as we have letters we can do without…”

served as a Lieutenant in Company G of the 168th Infantry, Rainbow Division, in the First World War. Many of his letters to his mother describe flowers on the battlefield. Mills was killed in battle near Epieds, France in 1918.

O. GEORGE OLSEN was a Ranger with Company

G, 75th Infantry, America Division, based at Chu Lai, Vietnam, killed in action in 1970 at the age of 23. He wrote his letter to Rosemary Dresch, a college friend. His earlier letters to Dresch are detailed, thoughtful narratives of his Vietnam experiences. This letter was the last he wrote to her.

War as a private soldier with the 15th Massachusetts Regiment, but died of “camp distemper” in 1977 while on his way to join Maj. Gen. Horatio Gates’ army in New York. In 1844, his widow Zerviah proved her eligibility for a government pension with his letter from the war.

Q. BEVERLY STANARD fought in the Civil War as a

Cadet from the Virginia Military Institute in Lexington. He was killed in action in the Battle of New Market at the age of 19 in 1864. Town Point Park

WHILE YOU ARE IN NORFOLK

The Armed Forces Memorial is one of several historic sites and museums honoring our military and those who have served. While in Norfolk, you are invited to also visit:

Witness battlefield history at Fort Norfolk, which changed hands twice during the Civil War and supplied ammunition for the Confederate ironclad in the battle between the Monitor and the Merrimac.

Explore the nautical, naval and natural power of the sea at Nauticus, Norfolk’s interactive maritime museum. This enormous waterside science and technology center boasts over 150 interactive exhibits. Also located at Nauticus is the historic Battleship Wisconsin, the largest battleship ever constructed by the U.S. Navy! The Battleship was recently acquired by the City of Norfolk and the interiors of the ship are now open for tours.

Adults and children will be captivated on this fun, informative tour of the world’s largest naval base. View massive destroyers and other vessels, and even go aboard on weekends.

Built in 1739, the church was the only building left intact after the burning of Norfolk in 1776. Its battle scars include a cannonball fired from a British ship that is still embedded in the wall. 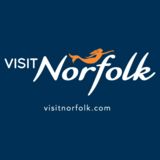