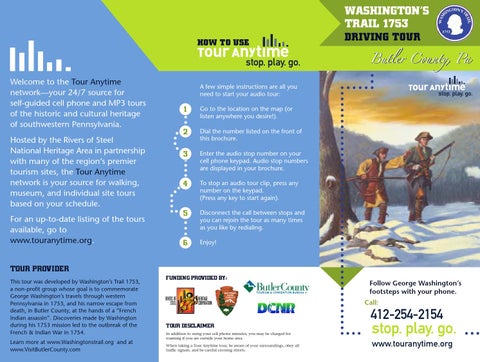 Welcome to the Tour Anytime network—your 24/7 source for self-guided cell phone and MP3 tours of the historic and cultural heritage of southwestern Pennsylvania. Hosted by the Rivers of Steel National Heritage Area in partnership with many of the region’s premier tourism sites, the Tour Anytime network is your source for walking, museum, and individual site tours based on your schedule. For an up-to-date listing of the tours available, go to www.touranytime.org.

A few simple instructions are all you need to start your audio tour:

Go to the location on the map (or listen anywhere you desire!).

Dial the number listed on the front of this brochure.

To stop an audio tour clip, press any number on the keypad. (Press any key to start again).

Disconnect the call between stops and you can rejoin the tour as many times as you like by redialing.

TOUR PROVIDER This tour was developed by Washington’s Trail 1753, a non-profit group whose goal is to commemorate George Washington’s travels through western Pennsylvania in 1753, and his narrow escape from death, in Butler County, at the hands of a “French Indian assassin”. Discoveries made by Washington during his 1753 mission led to the outbreak of the French & Indian War in 1754. Learn more at www.Washingtonstrail.org and at www.VisitButlerCounty.com

TOUR DISCLAIMER In addition to using your cell phone minutes, you may be charged for roaming if you are outside your home area. When taking a Tour Anytime tour, be aware of your surroundings, obey all traffic signals, and be careful crossing streets.

When Washington passed through this area on December 27, 1753 he had just survived his first brush with violent death. More life-threatening dangers awaited him.

On December 27th 1753, in a clearing near here, George Washington narrowly escaped death at the hand of an Indian assassin.

Before there was Prospect, this was a crossing of two important American Indian paths. George Washington used the Venango Path as he traveled south to the forks of the Ohio River.

George Washington camped about two miles south of here along the Slippery Rock Creek, December 1 and 2, 1753.

George Washington left Williamsburg, Virginia, the capital of the Virginia Colony, on October 31, 1753. He was on a mission for the Governor of the colony to investigate reports that the French were building forts in what is now western Pennsylvania. He had been traveling about a month when he reached present day Butler County.

Follow George Washington on His 1753 Mission through Butler County 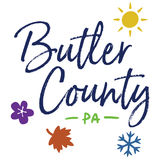 Follow George Washington’s footsteps with your phone. This tour was developed by Washington’s Trail 1753, a non-profit group whose goal is t...

Follow George Washington’s footsteps with your phone. This tour was developed by Washington’s Trail 1753, a non-profit group whose goal is t...