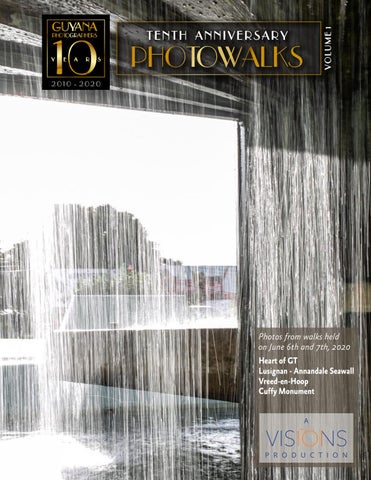 To commemorate the tenth Anniversary of the Guyana Photographers’ Facebook Group, we decided to hold a series of Photowalks around Guyana. Photowalks are excellent because enable photographers to meet in person, to share and learn from each other in real time, as well as to take photographs while participating in a group activity. The resulting images usually convey diﬀerences in views from photographer to photographer, even though many point their cameras at the same subjects. Furthermore, they serve to demonstrate the abilities of the photographers regardless of the device they use - whether they take pictures with a DSLR camera, a point-and-shoot camera, or a mobile device. This volume of the Tenth Anniversary Photowalks magazine contains self-curated images from the photographers who participated on the ﬁrst weekend. It must be noted that all participants adhered strictly to national guidelines and safety measures regarding COVID-19. The organizers also helped to have smaller groups undertake the walks by planning simultaneous activities. On this ﬁrst weekend, four walks were planned and executed. There were two walks on June 6, 2020: Heart of GT Walk led by Darrell Carpenay, and Lusignan – Annandale Seawall Walk led by Michael C. Lam. The following day, June 7, 2020, the remaining two were conducted: Vreed-en-Hoop Walk led by Tana Yussuﬀ, and Cuﬀy Monument Walk led by Brian Gomes. Following these walks on weekend one, the participants then selected a maximum of ten images from their haul to be published in this magazine. These pictures convey to others the individual experience of each photographer on those walks. Even though they are being shared with the public through this publication, kindly remember that images remain the property of the respective photographers and should not be replicated in any form without their consent. We hope you enjoy these artistic insights into the lives of Guyanese and places in Guyana from these four unique locations!

The Heart of GT Walk took photographers on a journey through one of Geogetown’s most interesting areas. The walk began at Parliament Building, located at High and Brickdam Streets, in front of the statue of Hubert Nathaniel Critchlow. Critchlow is a legendary Guyanese popularly referred to as “father of the modern trade union movement in Guyana.” The group then ventured deeper - into more bustling territory on entering the historic Stabroek Market area, which is easily one of the most enthralling and busiest regions in the city. Stabroek Market has a history which dates back to the 1800s and is possibly the most iconic, man-made structure in Guyana. Within the same vicinity are multiple mini-bus parks, street vendors, and taxi parks to satisfy the needs of the thousands of people who traverse the area daily - all of which made for great interactions and photographs.

As someone who has lived most their life in Georgetown, and has walked this route countless times, the decision to organise and lead the Heart of GT Walk for the Guyana Photographers’ Tenth Anniversary Photowalk Series was almost instinctive. Moreover, to share the experience with a group of passionate and talented individuals who were able to capture this part of Guyana’s capital city in their own exclusive way was an absolute pleasure.

the Republic, where many of Guyana’s most important buildings are located, including the High Court, the Magistrate’s Court, City Hall, and Bank of Guyana. Guyana’s colonial history is very evident along this stretch, with quite a few structures from that era, beautifully crafted canals lined with ﬂamboyant trees, and aesthetically pleasing, though poorly maintained, metal and concrete infrastructure. There’s absolutely no denying that the architects of Georgetown intended for it to be a city of beauty, elegance, and functionality.

Signs of the Era on Croal St., Georgetown © Darrell A. Carpenay

Parked but not forgotten © Bryan Nobrega

&#39;Even in these trying times we must not forget to live&#39; - Ave. of the Republic, Georgetown © Johnnathan Kanhai

Urban Art On Avenue of the Republic, Georgetown © Darrell Carpenay

Heart of GT Walk Two Images, specially from the leader of the photowalk

The stretch of seawall selected for this walk is about eight hundred metres long - beginning at the Lusignan pump station, passing the Annandale Koker and Pump Station and heading towards the mangrove area at Anandale (this stretch of Mangroves leads towards Buxton). These areas are not frequented by visitors as much as portions near/closer to Georgetown, but do see more ﬁshermen and their boats, and there is usually some activity from residents of the surrounding area.

As part of the Anniversary Photowalks, I chose this area because of my love for the sea and the seawall, and also because of the diversity of images possible. While I personally like wide landscapes/seascapes, there is much activity surrounding the Koker area with ﬁshermen, their boats, and associated activities. Due to the presence of mangroves, there is also a fair amount of birds, and as with almost any stretch of coast, you just never know what you might see, it changes all the time.

At the time of the walk (3pm), the tide was low but beginning to rise, so there was some water near the wall itself in some parts. There were also some

ﬁshermen and other visitors to the seawall giving the photographers a bit of variety to use.

Return of the Bounty © Nikhil Ramkarran

Boat on its way in at Lusignan seawalls © Bianca R. Campbell

Cabinet of the Captain© Nikhil Ramkarran

Lusignan-Annandale Seawall Walk Two Images, specially from the leader of the photowalk

Plastic City is a settlement just oﬀ the Vreed-enHoop Stelling - going north about quarter of a mile from the Vreed-en-Hoop Secondary School. The settlement can be found along an old Dutch Jetty nested in the mangrove forest going north towards the mouth of Demerara River. The red mangrove roots trap soil particles and garbage and it is on this that the Plastic City settlers built their homes. There are small wooden homes that line the right side of the Jetty which leads to the Atlantic Ocean. There is no electricity and no potable water in the area. Each home is equipped with barrels and drums to catch rain water for home use. At the time of the walk (10am) some of the settlers were seen doing household chores or relaxing in their homes.

From July to September, the place is busy with people from nearby villages who catch crabs there. During this time, everyone would be cooking crabs in their homes in every way you could imagine one can cook and eat crab. Due to their hard way of life, the people there are a bit “ruﬀ to the touch” and this is one of the communities that one would have to be “thick skinned” to live there. Towards the end of the jetty, one can get a clear view of the Georgetown skyline with some landmarks standing out. These include the Stabroek Market, Guyana Mariott Hotel, and the wharves.

Due to soil erosion and the distribution of house lots, many residents have moved, but many others

stayed on because some of them could not aﬀord to relocate, and the area is a quick access point to Georgetown where many of them would look for a days work .

A yard toilet in the mangrove forest ©Kenny Harrinaraine

Walk on the edge ©Dionne Vanderhyden

A little bit of everything © Dionne Vanderhyden

From Below - The Jetty © Savita Balkaran

Vreed-en-Hoop - Plastic City Two Images, specially from the leader of the photowalk

The 1763 Monument, also known as Cuﬀy, stands in the Square of the Revolution, D&#39;Urban Park - at the head of Brickdam (street). Although one may not think of it immediately as a location for a photowalk, the area encompasses the Independence Arch, the Oﬃce of the President, Castellani House, the Church of the Nazarene with its burial ground and the entire D&#39;Urban Park with the new Jubilee Park for events. It is very spacious and allows for very creative shooting.

The monument was built to commemorate the 1763 Rebellion also known as the Great Rebellion. Though not successful in attaining freedom, it was considered as the ﬁrst well-organized uprising by

the slaves against their oppressors, as they fought for their freedom. The name “Cuﬀy” was that of a house-slave who assumed a leading role during that rebellion. The uprising lasted more than a year before the slaves were overcome by their Dutch “masters” . The monument was designed by Mr Phillip Moore, an acclaimed local artist, and unveiled during Guyana’s Tenth Independence Anniversary celebrations. Images resulting from this walk try to capture the monument itself, but also a few others that lend to the nature of the area.

Cuﬀy - a man that fought for what we are now able to have in this country; freedom © Darnell Douglas

(all above) Art work that can be seen around the 1763 monument. © Brian Gomes

Cuﬀy the leader of the 1763 Berbice slave rebellion. © Darnell Douglas

Taken at the Square of the revolution © Darnell Douglas

A super-sized Golden Arrowhead, the ﬂag of Guyana, was raised at Jubilee Park on the occasion of our 50th Anniversary of Independence, on May 26th 2016. Since then it has been a notable feature of the landscape in the area. The ﬂag measures sixty-ﬁve feet wide by thirty-ﬁve feet high and sits atop a ﬂagpole that stands one hundred and eighty feet tall.

Cuffy Monument Walk Two Images, specially from the leader of the photowalk

I took the opportunity to capture the 1763 monument&#39;s and the Golden Arrowhead&#39;s reﬂection in a pool of water © Brian Gomes

The 1763 monument lit by the bright afternoon sunlight © Brian Gomes

Our Walk Leaders Darrell Carpenay Darrell Carpenay is a part-time amateur photographer. He has lived most of my life in Georgetown, and began taking photography seriously in 2017. For the most part, his photos include street-photography, landscapes, and anything in between that captures his eye. His work was part of the VISIONS 2018 Exhibition.

Michael C. Lam Michael C. Lam is a Guyanese photographer. His inﬂuences include the work of Ansel Adams, Hiroshi Sugimoto, and Darren Moore. The majority of his work tends to be high contrast black and white photographs, with a penchant for seascapes as evident in his Oniabo collection. In 2012, he co-exhibited with fellow photographer Nikhil Ramkarran in “Coastal Wanderings” at the National Gallery of Art, Castellani House. He was the Bronze medallist in the 2012 and 2017 Guyana Visual Arts Competition and Exhibition, short-listed in 2014. In 2014, he was the Chief judge for “Capture Guyana” photography competition. His work has been exhibited at Aljira, Newark, NJ; the Caribbean Cultural Centre African Diaspora Institute (CCCADI), New York; the Queens Central Library, New York; the Organisation of American States’ Twenty Fourth Inter-American Congress of Ministers &amp; High-Level Authorities of Tourism (2018), Guyana Marriott Hotel. In 2016, he exhibited in VISIONS Exhibition 2016 and later helped to organise subsequent installments of the said exhibition.

Tana Yussuff Tana Yussuﬀ is an environmentalist by profession and has been lucky to travel to many remote parts of Guyana where her passion for photography developed. During her expeditions into the interior, she would use her camera phone to capture all of nature’s beauty. Her photographic eye has since grown to encompass Guyanese culture and environment while still taking pictures of the nature. She believes that we take pictures to record our personal view of the world. Tana has been an active member of Guyana Photographers’ Facebook Group for about one year now.

Brian Gomes is a Guyanese photographer. For many years, photography had been a hobby/side hustle for Brian. However, after losing his job in 2017, he made a decision to turn photography into his career, focusing on wedding photography/video. Over the years, he has ventured into many diﬀerent genres of photography but is widely known for his work with nude art photography and the popular Made in Guyana nude calendar. Brian&#39;s work has been exhibited in the Organisation of American States (OAS) Indigenous Perspectives, twice in the Guyana Visual Arts Competition &amp; Exhibition, Capture Guyana Photography Competition, and Visions Exhibition. 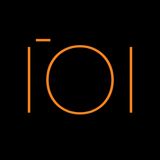