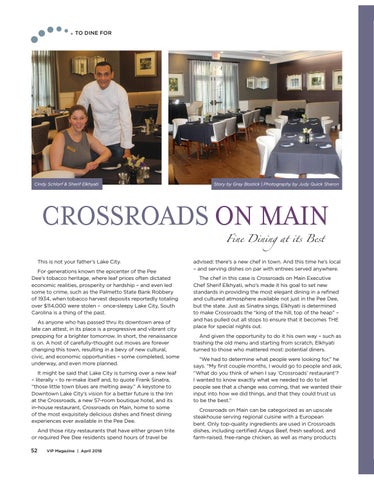 CROSSROADS ON MAIN Fine Dining at its Best

This is not your father’s Lake City. For generations known the epicenter of the Pee Dee’s tobacco heritage, where leaf prices often dictated economic realities, prosperity or hardship – and even led some to crime, such as the Palmetto State Bank Robbery of 1934, when tobacco harvest deposits reportedly totaling over $114,000 were stolen – once-sleepy Lake City, South Carolina is a thing of the past. As anyone who has passed thru its downtown area of late can attest, in its place is a progressive and vibrant city prepping for a brighter tomorrow. In short, the renaissance is on. A host of carefully-thought out moves are forever changing this town, resulting in a bevy of new cultural, civic, and economic opportunities – some completed, some underway, and even more planned. It might be said that Lake City is turning over a new leaf – literally – to re-make itself and, to quote Frank Sinatra, “those little town blues are melting away.” A keystone to Downtown Lake City’s vision for a better future is the Inn at the Crossroads, a new 57-room boutique hotel, and its in-house restaurant, Crossroads on Main, home to some of the most exquisitely delicious dishes and finest dining experiences ever available in the Pee Dee. And those ritzy restaurants that have either grown trite or required Pee Dee residents spend hours of travel be

advised: there’s a new chef in town. And this time he’s local – and serving dishes on par with entrees served anywhere. The chef in this case is Crossroads on Main Executive Chef Sherif Elkhyati, who’s made it his goal to set new standards in providing the most elegant dining in a refined and cultured atmosphere available not just in the Pee Dee, but the state. Just as Sinatra sings, Elkhyati is determined to make Crossroads the “king of the hill, top of the heap” – and has pulled out all stops to ensure that it becomes THE place for special nights out. And given the opportunity to do it his own way – such as trashing the old menu and starting from scratch, Elkhyati turned to those who mattered most: potential diners. “We had to determine what people were looking for,” he says. “My first couple months, I would go to people and ask, ‘’What do you think of when I say ‘Crossroads’ restaurant’? I wanted to know exactly what we needed to do to let people see that a change was coming, that we wanted their input into how we did things, and that they could trust us to be the best.” Crossroads on Main can be categorized as an upscale steakhouse serving regional cuisine with a European bent. Only top-quality ingredients are used in Crossroads dishes, including certified Angus Beef, fresh seafood, and farm-raised, free-range chicken, as well as many products 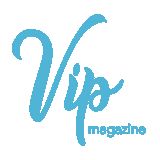