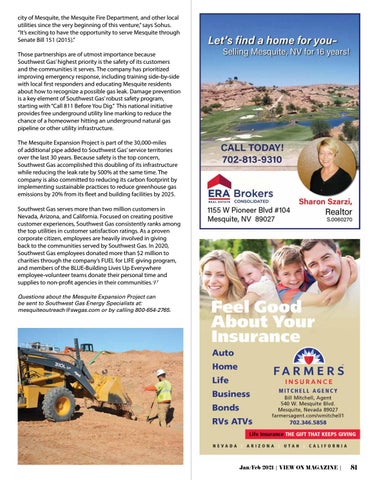 city of Mesquite, the Mesquite Fire Department, and other local utilities since the very beginning of this venture,” says Sohus. “It’s exciting to have the opportunity to serve Mesquite through Senate Bill 151 (2015).” Those partnerships are of utmost importance because Southwest Gas’ highest priority is the safety of its customers and the communities it serves. The company has prioritized improving emergency response, including training side-by-side with local first responders and educating Mesquite residents about how to recognize a possible gas leak. Damage prevention is a key element of Southwest Gas’ robust safety program, starting with “Call 811 Before You Dig.” This national initiative provides free underground utility line marking to reduce the chance of a homeowner hitting an underground natural gas pipeline or other utility infrastructure. The Mesquite Expansion Project is part of the 30,000-miles of additional pipe added to Southwest Gas’ service territories over the last 30 years. Because safety is the top concern, Southwest Gas accomplished this doubling of its infrastructure while reducing the leak rate by 500% at the same time. The company is also committed to reducing its carbon footprint by implementing sustainable practices to reduce greenhouse gas emissions by 20% from its fleet and building facilities by 2025. Southwest Gas serves more than two million customers in Nevada, Arizona, and California. Focused on creating positive customer experiences, Southwest Gas consistently ranks among the top utilities in customer satisfaction ratings. As a proven corporate citizen, employees are heavily involved in giving back to the communities served by Southwest Gas. In 2020, Southwest Gas employees donated more than $2 million to charities through the company’s FUEL for LIFE giving program, and members of the BLUE-Building Lives Up Everywhere employee-volunteer teams donate their personal time and supplies to non-profit agencies in their communities.V Questions about the Mesquite Expansion Project can be sent to Southwest Gas Energy Specialists at: mesquiteoutreach@swgas.com or by calling 800-654-2765.