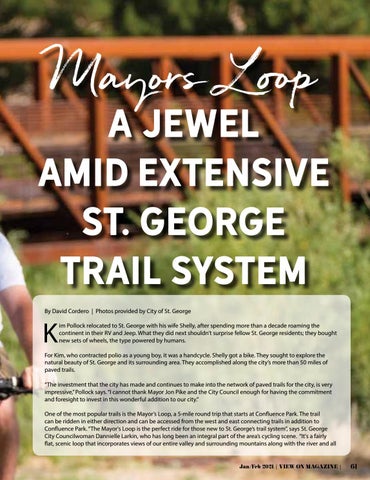 im Pollock relocated to St. George with his wife Shelly, after spending more than a decade roaming the continent in their RV and Jeep. What they did next shouldn’t surprise fellow St. George residents; they bought new sets of wheels, the type powered by humans.

For Kim, who contracted polio as a young boy, it was a handcycle. Shelly got a bike. They sought to explore the natural beauty of St. George and its surrounding area. They accomplished along the city’s more than 50 miles of paved trails. “The investment that the city has made and continues to make into the network of paved trails for the city, is very impressive,” Pollock says. “I cannot thank Mayor Jon Pike and the City Council enough for having the commitment and foresight to invest in this wonderful addition to our city.” One of the most popular trails is the Mayor’s Loop, a 5-mile round trip that starts at Confluence Park. The trail can be ridden in either direction and can be accessed from the west and east connecting trails in addition to Confluence Park. “The Mayor's Loop is the perfect ride for those new to St. George’s trail system”, says St. George City Councilwoman Dannielle Larkin, who has long been an integral part of the area’s cycling scene. “It's a fairly flat, scenic loop that incorporates views of our entire valley and surrounding mountains along with the river and all