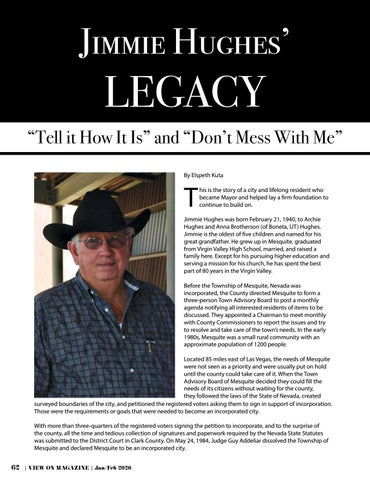 his is the story of a city and lifelong resident who became Mayor and helped lay a firm foundation to continue to build on.

Jimmie Hughes was born February 21, 1940, to Archie Hughes and Anna Brotherson (of Boneta, UT) Hughes. Jimmie is the oldest of five children and named for his great grandfather. He grew up in Mesquite, graduated from Virgin Valley High School, married, and raised a family here. Except for his pursuing higher education and serving a mission for his church, he has spent the best part of 80 years in the Virgin Valley. Before the Township of Mesquite, Nevada was incorporated, the County directed Mesquite to form a three-person Town Advisory Board to post a monthly agenda notifying all interested residents of items to be discussed. They appointed a Chairman to meet monthly with County Commissioners to report the issues and try to resolve and take care of the town’s needs. In the early 1980s, Mesquite was a small rural community with an approximate population of 1200 people. Located 85 miles east of Las Vegas, the needs of Mesquite were not seen as a priority and were usually put on hold until the county could take care of it. When the Town Advisory Board of Mesquite decided they could fill the needs of its citizens without waiting for the county, they followed the laws of the State of Nevada, created surveyed boundaries of the city, and petitioned the registered voters asking them to sign in support of incorporation. Those were the requirements or goals that were needed to become an incorporated city. With more than three-quarters of the registered voters signing the petition to incorporate, and to the surprise of the county, all the time and tedious collection of signatures and paperwork required by the Nevada State Statutes was submitted to the District Court in Clark County. On May 24, 1984, Judge Guy Addeliar dissolved the Township of Mesquite and declared Mesquite to be an incorporated city.