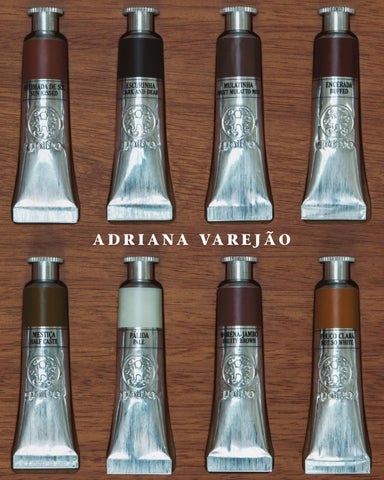 under the skin of language Margherita Dessanay

Throughout her artistic career, Adriana Varejão has established herself as an artist endowed with insightful responsiveness to the complexities of the world. Polvo, Varejão’s latest project, confirms the unique strength of her artistic voice. Consistent with the Brazilian artist’s previous works, the installation deals with themes of miscegenation and touches on the many unresolved consequences of centuries of colonialism. Varejão is always alert to the symbolic connotations embedded in material objects and everyday experiences. With Polvo, she engages in a provocative dialogue with generally accepted perceptions, taking as her starting point an apparently banal and meaningless occurrence. Her inspiration for Polvo arose more than ten years ago, the initial spark ignited by a seemingly ordinary event in the life of a painter: Varejão began to collect oil paint in skin tones from all over the world. She quickly realised that all the oil colours explicitly named after a human complexion were related to pink flesh tones, regardless of the continent of origin. This inspired a creative potential for Varejão. A characteristic of all her projects is the ability to single out abstract cultural connotations from disparate objects. Paint tubes could be thought of as neutral objects, but in Polvo they take on a symbolic charge. No longer merely an artistic medium, they become a material allegory for the ways in which Eurocentric cultural supremacy perpetuates itself. Harmless objects like paint colours can disguise racial hierarchies. The fact that all oil paints created for skin tones are intended to depict white ethnicity could not go unnoticed for

someone like Varej達o, who has always been committed to themes such as the effects of colonialism and, particularly, miscegenation. At the end of the 1990s, her inspiration began to take material shape when Varej達o came across a survey conducted in 1976 by the Brazilian Institute of Geography and Statistics (IBGE). Attempting to map the countless racial combinations existing in the country, the IBGE tried using self-determination as a way of classifying racial types: interviewees were asked to identify the colour of their own skin. The census produced a list of 136 names and locutions that, far from having scientific value, bear witness to how the Brazilian Portuguese language has developed imaginatively poetic words to define different colourcomplexions. In Polvo, Varej達o has developed a set of specially created flesh-tone oil paints with descriptive names drawn from that list. The production process included the design of a logo and the making of colours, aluminium tubes and the crate. One might imagine that Varej達o had decided to produce her own brand of oil paints in colours selected from the list out of a desire to portray all the skin variations found in Brazil. But the aesthetic strategies underpinning her artistic practice always lead her to unconventional ways of homing in on deeper and less obvious consequences. Her research opened up various conceptual drifts and took ten years to translate into the powerfully coherent project that is Polvo. Originating in her recognition of the paint-tube colour bias and developed via

her discovery of the 1976 census, the project establishes unforeseen connections between the two experiences. Varejão’s associative thinking has caused them to meet and weave together in a way that invites us to reflect on invisible social consequences sparked off by the act of naming and crystallised through the use of language. When Varejão came across the list of skin colours translated in an American sociology magazine, she found it striking that when literally translated many of the names had lost their signifying power. Language acts on different levels of cognition. It speaks not only to rational faculties but also draws on emotional and evocative levels of experience and cultural reference. In acting at different registers, it shows to what extent words and names trigger resonances that work truly only within their own culture. After selecting 33 names that affected her with their evocative power, Varejão embarked on translating them with the help of musician Arto Lindsay, journalist and art dealer Marcia Fortes, anthropologist Lilia Schwarcz, and Varejão’s London gallerist Glenn Scott Wright. Some of the names bear no objective reference to colour and their metaphorical dimension can correspond to a chromatic description only for Brazilians. For instance, ‘Cor de Burro quando Foge’ literally translates as ‘the colour of a runaway donkey’. Could a non-Brazilian deduce that the colour is a faded fawn? ‘Morena-Jambo’ comes from the name of a typical Brazilian mellow and

juicy fruit (a jambo), with which few people outside Brazil are familiar. In English, ‘Fruity Brown’ would seem a more relevant definition than ‘Jambo Brown’. Names like ‘Enxofrada’ (Angry Sulphur), ‘Café com Leite’ (Milk Coffee), and ‘Sapecada’ (literally ‘singed’ but actually more like ‘flirting with freckles’), infuse Polvo with a playfully poetic dimension. But a more problematic social aspect emerges when we consider other definitions in the 1976 list. This is when Polvo becomes a Pandora’s Box that releases symbolic forces: the good and playfully poetic along with the bad and socially problematic. The oil tubes in the crate include nuances such as ‘Puxa Para Branca’ (Tending to White) and ‘Pouco Clara’ (Not so White). Such definitions are used for people of mixed race. This defining of a person by their proximity to White ethnicity reflects the self-internalisation of racism that exists in Brazil. People of mixed race feel the need to value themselves by their degree of whiteness, as if that were the only worthy part of their origin. This is a long-term cultural consequence of a country that has erased a significant part of its history: the violence against its indigenous people, the practice of slavery and the social discrimination out of which Brazilian society was born. Just as there is no trace of the many historical sites where African slaves settled when Portuguese colonisation began, so language can, at times, privilege the White (Caucasian), deliberately exclude the Black (African), Red (Indigenous) and Yellow (Asian) genes when naming ethnicities through skin complexion. While Brazil’s government uses the melting pot of races

inhabiting the country as a reason to pride itself internationally as a peaceful and harmonious society devoid of racism, the harsh reality could not be more different. Nowadays, Brazil is a leading country in the world economy, but the level of social inequality within it is one of the highest in the world and is very much racially determined. Issues of racial discrimination are strictly intertwined with issues of access to equal opportunities for non-White citizens, so much so that there exists the expression ‘o dinheiro embranquece’ (money whitens), which summarises how much the racial condition of an individual is perceived to correspond to a specific social status. What happened to the myth of Brazilian ‘Racial Democracy’ theorised by Gilberto Freyre in the 1930s? In his Masters and Slaves, Freyre recounted a world of racial inclusion that would have taken place through affective bonding, as between Black nannies and White children. It was a positive and optimistic view, but also patronising. The title of Freyre’s work betrays the ambiguity of his perspective, which is probably the same one that produced the expression ‘tem um pé a cozinha’ (to have one’s foot in the kitchen). Still used in Brazil, this saying suggests that everyone has some Black in their blood. Brazilian miscegenation has passed, in particular, through sexual intercourse between White masters and their Black servants, in the relation of social and racial subordination between White and Black that still exists, reflected and reasserted in language. The term ‘mestiça’, selected by Varejão, in Brazilian Portuguese describes

a woman of mixed ethnicity. Unlike ‘mulato’, used for someone of White and Black descent, ‘mestiça’ can be used indiscriminately for the mixture of White, African and/or Indigenous ethnicities. Because, as a term, it does not identify exactly which races are in the mix, it translates best as ‘half-caste’. The word ‘caste’, from the Latin ‘castus’, means ‘pure’ and defines a racially pure ethnicity. Polvo includes 11 portraits inspired by the ‘Casta Pinturas’ (Caste Paintings), a style of portraiture developed in Mexico during the seventeenth and eighteenth centuries, after the Spanish colonisation. Caste Paintings represent the many racial combinations in the Spanish colonies, and were used in the classification of races. By adopting this historical reference, Varejão subverts and contradicts what the genre was meant to be. In 1997 she did something similar with the triptych Eyewitnesses X, Y and Z, where she portrays herself as an Indian, an Asian and a Moorish woman. The triptych pays homage to marginal ethnicities that have played a paramount role in the past and in shaping cultures, yet are often forgotten by history. For Polvo, the 11 portraits of the artist, commissioned from an academic painter, were all given identical features but different complexions, ranging from fair to dark, and all done in the classical style of formal portraiture. Just as language is a vessel of invisible connections and connotations, so too is a style of painting. A formal language can evoke a universe, and the style of these portraits conjures up those that hung on the mansion walls of the rich in colonial times.

When such an evocation is triggered, Varejão’s subversive strategy explodes in all its potency. She inserts into each of them a colour chart that at first looks like a chromatic study for reaching the skin complexion in the painting. Varejão uses the chart as a subversive device to disrupt commonly accepted meanings, a trick that activates in the viewer a short circuit of references. By its status as faux scientific study, the chart questions the supposed scientific validity of any colourclassification in the portraits. In portraying the same person with different skin tones, Varejão suggests that a person’s colour ought not be a significant social aspect. If discourses on race use scientific classification as a form of justification, it is in the precise act of naming that cultures have made racial differences a meaningful and relevant aspect of social life. Meanings are not inherent to things or events. Anthropology has demonstrated that there are still tribes, such as the Indonesian Dani, who do not name colours, except as ‘dark’ or ‘light’. Naming skin colour is not a neutral act, but a cultural construct with deep social consequences. With Polvo, Varejão invites us to question the fixity of language. The ethos underpinning the project is in its title: in Portuguese, ‘polvo’ means ‘octopus’ and sounds like ‘povo’, the word for ‘people’. Curiously, octopus ink contains melanin, the pigment responsible for the colour of human skin. Polvo invites us to free words from definitive meaning, and to think of language as a powerful cultural tool that can serve not only racist discourses but also their unmasking through poetically new and unconventional uses.

Published on the occasion of the exhibition Adriana Varejão | Polvo 15 October – 9 November 2013 Victoria Miro, 16 Wharf Road, London N1 7RW Text by Margherita Dessanay Publication design by Martin Lovelock Portrait by Christian Gaul Photography of works by Vicente de Mello Photography of installation by Stephen White The artist would like to thank Victoria Miro Gallery, London, Galeria Fortes Vilaça, São Paulo and Lehmann Maupin Gallery, New York / Hong Kong Printed and bound by PUSH All images courtesy the artist and Victoria Miro, London All works © Adriana Varejão Published by Victoria Miro Gallery 2013 ISBN: 978 0 9568566 9 2 Copyright © The Victoria Miro Gallery All rights reserved. No part of this book should be reproduced in any form by any electronic or mechanical means (including photocopying, recording or information storage or retrieval) without permission in writing from the publisher

Victoria Miro Gallery is delighted to present one of the most original voices in contemporary Brazilian art Adriana Varejão. Polvo addresses the ambivalent notion of interracial identity in Brazil, where historically race has assumed a social and cultural function. The printed version is available in our galleries or online at our website. The retail price is £20.