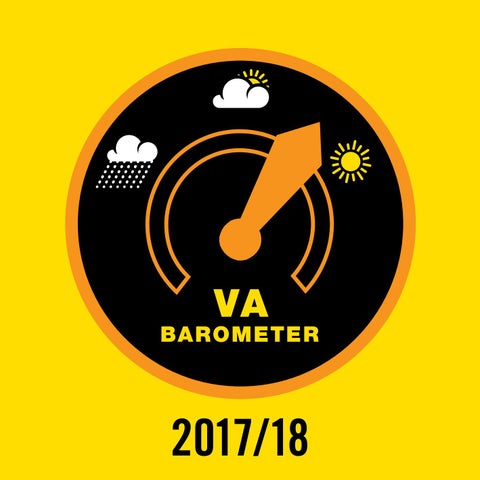 The VA Barometer is based on around 1,000 telephone interviews with a randomised sample representative of the Swedish population aged 16–74. Only statistically significant comparisons between the response groups are highlighted. It is the 16th Barometer survey since VA was founded in 2002. Read more about survey on page 30.

LAST YEAR THROUGH SWEDISH EYES The Swedish government decides that the University of Dalarna will continue to operate on two campuses in Borlänge and Falun, instead of merging the two campuses into one.

The Syrian regime takes back Aleppo after over four years of civil war.

Terrorist attack in the centre of Stockholm.

March for Science organised in over 600 cities across the globe in support of science. VA coordinates the Stockholm march. The Minister of Research announces that Sweden will develop a new space strategy.

Bob Dylan is awarded the Nobel Prize in Literature.

The term alternative facts is coined by Donald Trump’s adviser Kellyanne Conway whilst defending statements on attendance numbers at the US presidential inauguration.

One of Hungary’s leading universities, the Central European University in Budapest, is threatened with closure due to a new law. A Swedish inquiry on research misconduct presents its final report on a “New scheme to promote good practice and to manage misconduct in research”.

Anders Söderholm is appointed as the new Director General of the Swedish Higher Education Authority.

Former ViceChancellor of University of Gothenburg Pam Fredman is appointed to lead an inquiry into resource allocation and the governance of Swedish universities.

Emmanuel Macron takes over as President of France. A cyber attack affects 230,000 computers in 150 countries. It is the largest cyber attack to date.

North Korea carries out a nuclear test in the north of the country causing an earthquake of magnitude 6.3 on the Richter scale. North Korea’s test is estimated to be eight times more powerful than the bomb dropped on Hiroshima.

RESEARCH IS OF INTEREST

Neither high nor low

WHAT AFFECTS CONFIDENCE? As a follow-up to the question about confidence in research, we also asked about the reason behind the response given. The most common answer was no particular reason. This proportion is greater amongst people with high confidence in research than among those with low confidence. Common reasons for having high confidence is that it is important to conduct research and it is therefore necessary to trust it, as well as references to researchersâ&#x20AC;&#x2122; personal characteristics (such as them being serious and knowledgeable). Common reasons for having low confidence in research is the perception that research is governed by different economic interests and hidden agendas, as well as respondents feeling that they themselves have insufficient knowledge about research. The table shows the most common reasons for particular levels of confidence being chosen. Some answers have been clustered. NUMBER OF RESPONDENTS: 968 (VERY + FAIRLY HIGH = 643; NEITHER/NOR = 277; VERY + FAIRLY LOW = 48)

Research is serious and fact-based

Neither high nor low confidence

Governed too much by money

Important to be sceptical

Governed too much by money

Important to be skeptical

PERCEPTIONS OF MEDICINE DOMINATE Respondents were asked to say what comes to mind when they hear the term research (the other half were asked about the term researchers, see pages 18–19). A quarter of respondents mentioned something relating to the medical field, for example medical research, pharmaceutical development and illnesses. Other common responses were grouped in the categories scientific method and new things/findings. Positive words such as a better world, knowledge seeking and development were also frequent. One in seven had no particular association with the term research. The word cloud shows the respondents’ associations to research. The option nothing in particular is excluded, as it is over dominant. Responses have been slightly reworded and grouped together to create the word cloud. NUMBER OF RESPONDENTS: 514

The individual points show confidence in researchers at universities according to level of education.

POSITIVE VIEW OF RESEARCHERS Half of the respondents were asked for their associations with the term researcher (the other half were asked about the term research, see pages 14–15). One in seven answers nothing in particular, which is the most common answer. Among the most commonly used words, several have a clear connection to the medical field: medical researcher, pharmaceutical development and illnesses. Many associations are linked to researchers’ personal characteristics and have been grouped together as knowledgeable & methodical. Other common associations are scientists, lab coats and researchers being highly educated, knowledge-seekers and working for a better world. The word cloud shows the respondents’ associations to researchers. The option nothing in particular is excluded, as it is over dominant. Responses have been slightly reworded and grouped together to create the word cloud. NUMBER OF RESPONDENTS: 507

Would you like to work as a researcher in the future? (16–29 years old)

Would you recommend becoming a researcher to someone you know? (30 years and older) 17 %

TOPICS TO TALK TO RESEARCHERS ABOUT Interest in research is high in Sweden. To better understand this interest we asked what the public would like to talk to a researcher about if they had the chance. The answers were broad, but many would talk about illnesses. A large number would especially like to discuss cancer. Climate change, the environment and space are also high on the Swedes’ list of subjects to discuss with researchers. Many were interested in the researchers themselves and would like to ask, for example, “Why did you become a researcher?” and “What does your job involve?” Questions about the conditions of research also came up, such as scientific methods and the allocation of grants. The graph shows responses to the question If you had the opportunity to talk to a researcher, what would you like to talk about? The proportion that doesn’t know (21 percent) is not included in the graph, as well as subjects that got less than one percent. NUMBER OF RESPONDENTS: 1,021

To a reasonable extent

More than four out of ten Swedes believe that politicians should take research more into account in their decision-making, while one third feel that the level is reasonable (similar to last year’s results). Those with tertiary education believe to a greater extent that research needs to be taken into account more (48 percent compared to an average of 42). The corresponding figure for those with only compulsory-level education is 36 percent. A third of those with tertiary education consider that reasonable account is taken; a figure that corresponds to 42 percent of people with only compulsory-level education. This figure is 47 percent for 16–29 year olds and 25 percent for people aged 30–44. The figure shows the answers to the question To what extent do you think research is taken into account when political decisions are made in Sweden? NUMBER OF RESPONDENTS: 1,021

Differs depending on the research field

PARTIES UNCLEAR ON RESEARCH Sweden’s next general election will be held in 2018. We therefore asked which of the country’s political parties best represent research issues. Obviously this is not clear, with six out of ten respondents saying they don’t know. A lower proportion of people aged 30–44 and those with tertiary education respond that they don’t know (48 and 50 percent respectively). The response that no party represents research issues well is more common among men (eleven compared to five percent women) and those with a tertiary education (ten compared to four percent of people with only compulsory-level education). The third that did select a party had a clear favourite. The Green Party was selected by one third of those who named a party, which corresponds to eleven percent of the total number of responses. The graph shows responses to the question Which political party do you think best represents research issues? NUMBER OF RESPONDENTS: 1,021

ABOUT THE SURVEY The VA Barometer has been conducted annually since 2002. The survey is conducted via telephone interviews with a stratified random sample of the Swedish population, around 1,000 people (this year 1,021), aged between 16 and 74 years old. The response rate in this year’s survey was 51 percent. Respondents are representative in terms of gender, age and place of residence. The results have been weighted retrospectively to ensure representativeness in terms of level of education. Interviews are conducted annually over two weeks during September/October and are completed before the yearly announce­ ment of the Nobel Prize winners so the media attention does not affect the results. This year the field period ran from 11 September to 1 October 2017. Exquiro Market Research has carried out the interviews since 2012. A reference group with expertise in survey methodology helps to develop the questionnaire. The questionnaire can be downloaded at www.v-a.se/english-portal/ alongside the digital version of this year’s VA Barometer. All questions were asked in Swedish.

VA (Public & Science) promotes dialogue and openness between researchers and the public, especially young people. The organisation works to create new and engaging forms of dialogue about research. VA is also developing new knowledge on the relationship between research and society through surveys and studies. Its members consist of some 80 organisations, authorities, companies and associations. In addition, it has a number of individual members. 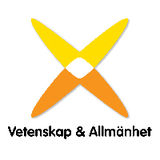